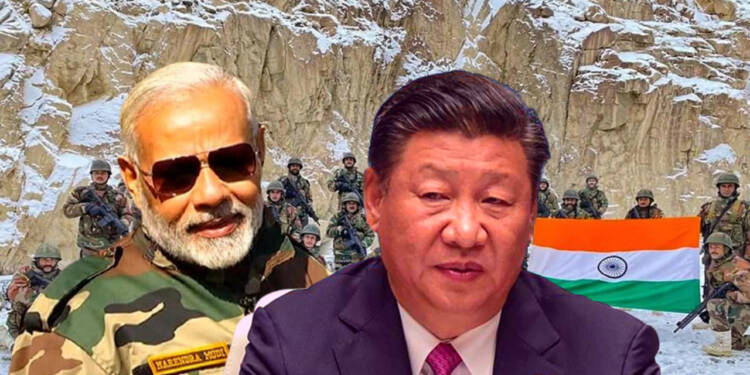 Chinese President Xi Jinping Jinping has resorted to ‘rally around the flag’ trick to stop a very possible popular anti-CCP uprising. Jinping tried to gain some political points by invoking jingoism in China but chose the wrong enemy and failed terribly.

In a recent face-off at Indo-China border, Chinese troops returned black and blue after they attempted another land grab in the mighty Himalayas against India. As a result of protests that started on November 25 in more than twenty Chinese cities in response to the Urumqi fire that killed 10 people, Beijing was forced to ease limitations on the long-standing zero-Covid policy. However, China’s latest wave of unprecedented protests has not yet stopped. According to OSINT researcher Nathan Ruser, there have been 68 dissent occurrences over the last weekend in 31 locations around China.

And the protests are not going to be ceased anytime soon, this is the beginning of the anti-CCP uprising. Therefore, Jinping attempted a vile land grab against India. According to Indian Express, on December 9, at about 3 am, a fight broke out at a nullah along the Indo-China border in the Tawang heights close to a village called Yangtse in Eastern Tawang. This sector of the Indo-China border is one of the “agreed disputed areas” between the two sides.

On either side of the nullah, there are Indian and Chinese forces stationed. However, on this particular night, 300 Chinese soldiers entered the Indian side. There were no warning signs about the intrusion, and when about 70 to 80 Indian forces heard the sentries being assaulted, they readily mobilised in the middle of the night to push the intruders back. And then, several hours were spent in severe hand-to-hand battles using sticks and canes.

What happened further is no longer a secret. What’s hilarious is the fact that, in anticipation of outnumbering the Indian troops, the PLA brought drones to record the conflict. However, they were beaten back badly and were forced to flee to their side of the Indo-China border.

Since the fatal Galwan incident in eastern Ladakh in June 2020, this was the closest encounter between Indian forces and members of the PLA. Even last time, the sheer courage of their Indian rivals made Chinese minions fall into gorges and run with their tails between their legs. All in all, while India lost 20 of her Bravehearts who protected their motherland with their lives, the damages inflicted on the Chinese side were simply immeasurable.

Read More: China mocks itself by ignoring India in the Indo-Pacific

Such was the embarrassment and devastation caused to the People’s Liberation Army of China that the CCP did not even confirm the casualties until many months after the clash. No matter how tyrannical a country is, its soldiers are always honoured. However, China is no ordinary country. It is ruled by a demented regime that fears the masses.

The CCP is very well aware of the incapabilities that the Chinese soldiers’ harbour. They know that PLA’s ‘tiny minions’ can’t fight the giant Indian army soldiers and they try to outnumber them by four times as in the latest case in the Indian state of Arunachal Pradesh. China after Galwan satiated itself with thrilling accounts of events from last year’s clashes and tried to paint a victorious picture for itself falsely, meanwhile, India has been working overtime to counter any Chinese threat in the region.

And when the Chinese tried their illegal land grab, they were whacked back to the place they belong, that is, inside the Chinese territory.