As Canada’s federal government’s primary agenda of wokeism continues, no wonder that the Canadian citizens will be exempted from seeing the reality but what was not expected is such leniency in dealing with the drug problem 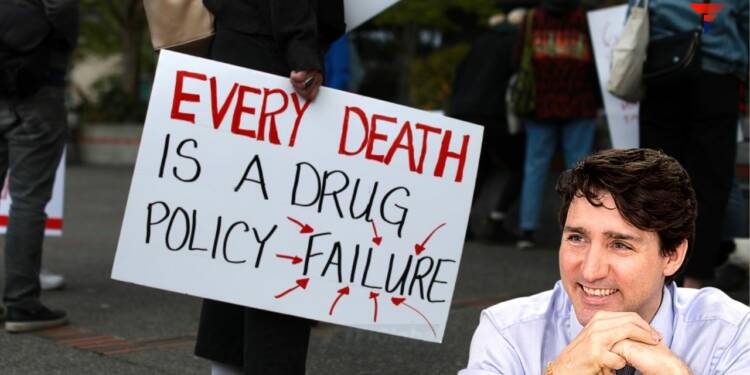 As its primary agenda of wokeism continues, no wonder that the citizens will be exempted from seeing the reality but what was not expected is such leniency in dealing with the problem. Even if criminal penalties for drug possession, consumption, production, and distribution are not enforced under criminalization, they are still illegal. People suspected of possessing drugs can still be stopped and searched by police, and they are allowed to take drugs and other items used for drug use. Despite this, the fact remains that cannabis was still legalized in Canada four years ago officially by the government.

During the pandemic, the overdose crisis in Canada has worsened, with the number of people dying from illicit drugs reaching new highs in many provinces. According to the data, the pandemic was a factor in the supply’s increasing toxicity. The Canadian Centre on Substance Use and Addiction claims that once pandemic lockdowns were announced in March 2020, supply volatility significantly increased. The scope of safe supply programs is currently limited. A prescription from a doctor is required to use the programs, which are available in a small number of cities in B.C., Ontario, Quebec, and New Brunswick.

What lies behind the curtains is the deliberate unwillingness of the government to do something about the problem. Surely enough there are laws and systems to curb the problem but what lags the ground is the willingness to implement them. In a way, the more Canadians use drugs, the more accepting they are likely to become of the government’s policies. As it regulates parallel satisfying thinking in the minds of the voters, they are most likely to vote for a government that satisfies their interests and when overdosing becomes an interest, then even the government’s job becomes easier.

Apart from this the fact that where the supply comes from, comes from South America and notably from Mexico. As a part of the share, the government is likely to earn profits from the dealers in exchange for allowance to them for supplying drugs in the country. This might seem like an insider system to many, so even an extravagant factory operated in St. John’s.

It was constructed for Canopy Growth in the White Hills neighborhood of St. John’s and can produce up to 18,000 kilograms of high-quality cannabis annually. Canopy sold its $40 million New Brunswick production facility to a different cannabis company in November 2022. The specifics of an agreement that, according to the provincial government, will guarantee a “safe and secure supply” of cannabis when prohibition ends in 2018 were made public in 2017. Quite surprisingly, even the government supported such operations. What can the world imply through this? Just simply because Canada does not need outsiders to push its population into drug abuse, the government itself is enough.

Read More: The sorry state of Canadian Airlines under liberals

Until now, Prime Minister Justin Trudeau has opposed the complete decriminalization of simple drug use and possession. His government, on the other hand, has taken some steps to treat drug use as a health problem rather than a crime. Marijuana was made legal by the Liberal government in 2018. Additionally in 2018, the government amended the Controlled Drugs and Substances Act, making it possible for medical professionals to prescribe, sell, or provide methadone without submitting an exemption request to Health Canada.

Companies touting the medicinal properties of magic mushrooms are intensifying their efforts to lobby the Liberal government, which is currently attempting to eliminate mandatory minimum sentences for drug offenses as well. Overall, Canada’s approach to drugs is changing dramatically, as evidenced by policy shifts and softer stances.