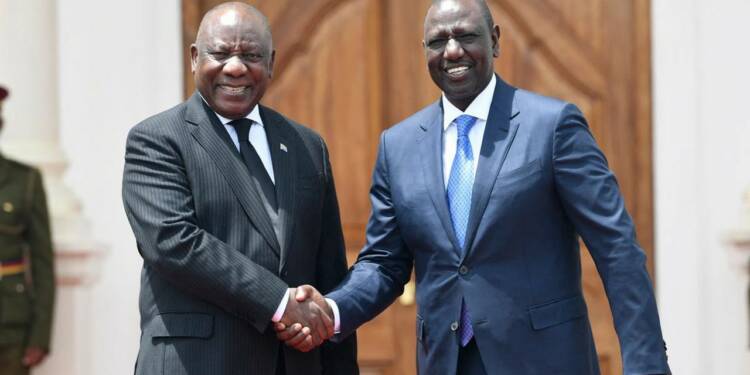 Trade volume between Kenya and South Africa has always been minimal as compared to their engagement with other major trading partners. However, new dynamics have been noted as the two African countries are taking a few steps in the right direction to overcome various issues related to trade. Kenya’s President William Ruto has been working in to boost regional co-operation in Africa to reduce reliance on the West or any foreign powers. Thus, the steps taken by Kenya and South Africa to remove trade barriers will prove to be a shot in the arm of those endeavors.

Trade between South Africa and Kenya has been minimal. As per a report, Kenya ranked 27th amongst South Africa’s export destinations and accounts for just 1% of South Africa’s total exports. In terms of imports, Kenya does not feature even in the top 30 import suppliers to South Africa’s market. Further, since 2007, South Africa has always maintained a trade surplus with Kenya.

The trade imbalance between Kenya and South Africa exists due to several reasons. Kenya is primarily an agricultural economy while South Africa is advanced in manufacturing, mining, service, and technology, which makes it able to produce high-value goods at low costs. Moreover, there are trade barriers limiting business between the two countries. Trade barriers like Visa-issuance, high import tariff rates, etc have hampered trade between the two. Currently, Kenyan Business people apply for visas to visit South Africa which are granted for three months while South African Business people get visas on arrival. There is a need to harmonize the process and consider long-term visas for Kenyan Business people. Apart from this, administrative and historical reasons have also played a part in hampering trade between the two countries. For instance, Kenya did not support South Africa in its fight against ending apartheid.

Ever since William Ruto became Kenya’s President, he launched an aggressive campaign to deepen ties with various African countries and envisioned stronger African unity to reduce dependence on outside powers that inevitably lead to meddling in internal affairs.

Kenya and South Africa have joined hands to resolve trade barriers and called for boosting trade and investments. At the recently held business forum in Nairobi South African President Cyril Ramaphosa and his Kenyan counterpart, William Ruto, held talks about increased cooperation, including allowing visa-free travel by Kenyans to South Africa from Jan. 1. Visa issuance has been one of the major obstacles for Kenya that has hampered trade with South Africa.

For a long time, Kenyans have had to pay visa fees and provide proof of sufficient funds and return flight tickets to be allowed to travel to South Africa. This was a welcome step in the right direction which will strengthen trade, investment, tourism, and cultural ties. The agreement is set to benefit Kenya, which ran on a trade deficit of Sh40.1 billion in 2021, and investment by private companies and investors that have been eyeing the southern African country for expansion.

South Africa’s Industry and Competition Minister Ebrahim Patel said that Trade between the two countries last year was only 6.5 billion rands ($366 million), which was “not sufficient,”. The traders from the two countries have also faced administrative barriers to selling across different trading blocs given that  South Africa is a member of the Southern African Customs Union while Kenya is part of the East African Community. These blocs apply external tariffs and other administrative measures that restrict the entry of non-members into their markets. As per economist XN Iraki, the move by the East African Community, Southern African Customs Union, and the Common Market for Southern and Eastern Africa to harmonize their tariffs under the African Continental Free Trade Area is a major step towards eliminating some of the barriers to trade between the two states. The continental market deal is also expected to harmonize quality standards for traders across Africa.

Recently, Kenya and South Africa have also signed three memoranda of understanding and one agreement of cooperation of correctional sciences, on the field of housing and human settlement and cooperation between Kenya School of Government and the National School of Governments from South Africa and the agreement on audio-visual co-production. To further boost ties, the two countries should also have their citizens learn about one another in schools. The decision to introduce Kiswahili in 90 South African schools as an optional subject was a welcome move, according to economist XN Iraki. Likewise, the more cultural, and educational exchange would help deepen the trade ties between the two states.

The dependence of Africa on China or the West has never fully benefitted the continent. It is well-known how the continent has become addicted to loans provided by these countries and corrupt politicians have taken the advantage of it for their benefit rather than Africa and its people. The consequence of which is that the continent today is reeling under mounting debt and many economies are struggling in Africa. Thus, these initiatives that aim to boost regional cooperation in the only way forward for Africa to realize its full potential. South Africa and Kenya resolving their issues related to trade in order to support each other’s economies should become the norm rather than the exception for Africa.