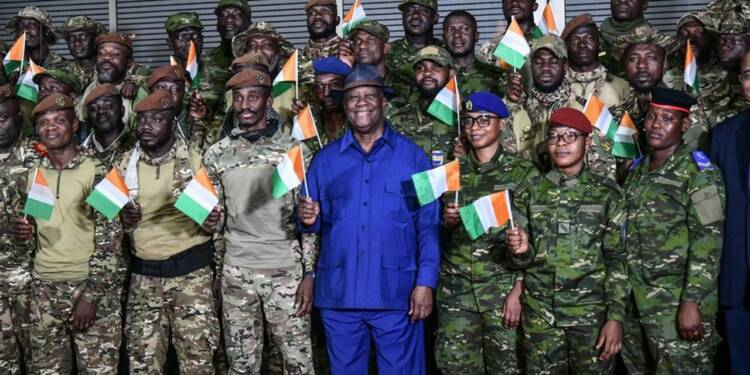 Mali’s junta leader Assimi Goita has recently pardoned all 49 Ivorian soldiers whose arrest in July had triggered a bitter diplomatic row, a government spokesman said, just a week after the courts sentenced them. Taking this into consideration, Mali can be seen as taking its first step in ending its isolation.

Major diplomatic tensions had emerged after 46 Ivory Coast soldiers were sentenced to 20 years in prison in December for conspiring against the government. These soldiers were also fined more than $3,000 and convicted of carrying and transporting weapons as per reports. The soldiers were arrested at the airport in Mali’s capital Bamako in July when they went to work for Sahel Aviation Service, a private company contracted to work in Mali by the United Nations. However, Mali’s military administration said the soldiers were acting as mercenaries, while Ivory Coast said they were part of a UN peacekeeping mission.

Further, they were charged with attempting to undermine state security in August, 2022 and convicted in a trial, ahead of a January 1 deadline set by the Economic Community of West African States (ECOWAS). Their arrests led to a diplomatic row between the neighboring countries and condemnation from regional allies. The diplomatic row was not in favor of Mali and could gain very little out of it as the region’s main political and economic bloc had asked it to either release them or face sanctions.

Given the scenario, Mali faced a huge backlash which could have adversely affected its security situation as Ivory Coast had announced that it would withdraw its remaining soldiers from the UN peacekeeping mission in Mali.

Mali is one of Africa’s most volatile countries and has for a decade relied on regional allies and peacekeepers to contain rebels who have killed thousands of people and taken over large areas of the central and northern regions. Several insurgent groups are fighting against the Malian government for independence or greater autonomy and Mali has depended on foreign military help to deal with the conflict. Forces from African union the were also deployed to help Mali against the prevailing insurgency. Thus, Mali’s actions were antagonizing its neighbors and in the long run, Mali would have suffered.

This is also because Mali had already been facing isolation after a coup led by Assimi Goita overthrew President Ibrahim Boubacar Keita. The ECOWAS had urged all its member states to seal their borders with Mali and impose economic sanctions on the country. Moreover, West African leaders had suspended Mali from its internal decision-making body and vowed to cut off Mali from the region’s cash flow and impose sanctions on the military putschists led by Assimi Goita.

This isolation would have hit its economy severely. For example, landlocked Mali depends on Guinea to ship goods in and out of the port in Conakry. It also has 8,000 troops stationed in Mali as part of the UN peacekeeping mission. Thus, Goita’s actions were compounding its isolation in the continent.

However, with the decision to pardon the 49 Ivorian soldiers, Mali has undone some of the damage. Additionally, this can be considered an important change of policy by the Malian military leader and can be considered a significant step on the part of Mali to end its isolation in Africa. Today African leaders are calling for greater regional cooperation to boost each others’ economies and ensure peace and stability. To this point, Mali has also made the first step in that direction which is likely to send the right signals to its neighbors for meaningful cooperation in the future and utilize regional cooperation for its benefit.