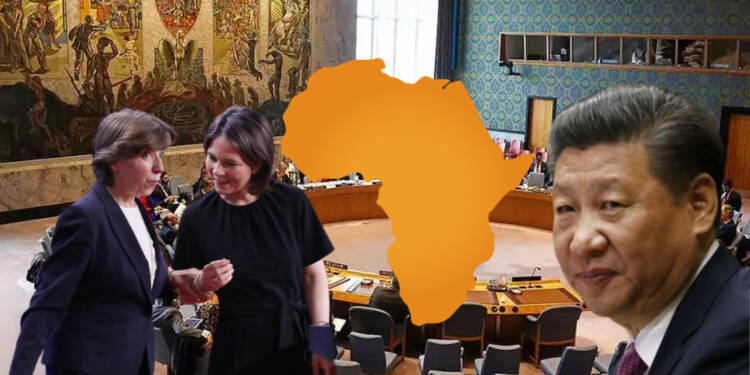 Demand for a permanent seat at the United Nations Security Council (UNSC) has grown across the world. Developing countries are demanding UNSC reform for a long. But Veto-wielding countries like China at the UNSC have blocked such an attempt for long. Given that the competition to gain influence in Africa has grown in recent years, Germany and France have decided to use China’s silence on Africa’s demand for a permanent seat at the UNSC.

Germany and France have issued joint support for “two permanent seats in the security council for the African continent” as per a report. The Foreign Ministers of both countries have said the move will improve Africa’s bilateral relations with other continents on matters of security.

The two foreign ministers were on a visit to Addis Ababa to support peace in Tigray, more than two months after the agreement that ended the conflict in this northern region of Ethiopia. The German Foreign Minister, Annalena Baerbock has said that “we see that the world in 2023 is not the world after the second world war, therefore we are supporting two permanent seats in the security council  for the African continent and to intensify our cooperation it is important that we are working together bilaterally but also the continent to continent relations in the name of our people is crucial,”

Interestingly Germany and France’s support to Africa for UNSC permanent seat has come at a time when China’s new Foreign Minister has sidestepped a new call by the African Union (AU) for permanent representation on the United Nations Security Council during his visit to Ethiopia.

As per a report, while speaking at the opening of the Chinese-built headquarters of the Africa Centres for Disease Control and Prevention in Ethiopia’s capital, Addis Ababa, Qin instead emphasized China’s partnership with Africa in security and economic development only.

The West Capitalising on China’s silence

Recently, the Biden administration hosted the US-Africa summit to boost ties with Africa and bridge the trust gap with the continent. China’s rise in Africa was also an unstated focus of the summit. The summit was thus an attempt on the part of the West to counter the growing influence of China and also Russia. This aggressive campaign in Africa by the US to maintain its dominance and counter China’s influence rattled China’s ruling Communist Party, following which China’s new Foreign Minister started his trip to five African countries.

China has invested heavily in infrastructure in African countries, including roads, railways, and hospitals. China has also emerged as a major aid donor to Africa. Both China and the West have strategic interests to protect within Africa whose geopolitical importance has significantly grown after the Russia-Ukraine war. Although China’s new Foreign Minister Qin has rejected the idea that China is competing in Africa with the United States, the reality is clear as day.

Thus, at a time when China’s FM sidestepped the African Union (AU) call for permanent representation on the United Nations Security Council, Germany and France got an opportunity to overshadow China’s attempt to woo Africa by extending its support for the UNSC seat to Africa.

Demand for UNSC reform is not new. An increasing number of world leaders have voiced support for a more representative and functional UN Security Council that represents contemporary realities.

African Union Commission Chairman Moussa Faki Mahamat told a joint press conference that Africa’s lack of permanent representation on the Security Council is a “burning issue” considering that most issues on the council agenda are related to African countries.

He further said, “It is unacceptable that others decide in the place of others. It is not fair. We need a new order at the international level which will respect the interests of others.”

UNSC reform has been a long-standing demand, particularly from developing countries that are under-represented in the UN body. Further, there are concerns that the structure of the UNSC does not reflect the current world order and that the paralysis induced by the permanent member’s overuse of their veto power impedes the UNSC’s core objectives.

Given that China is one of the council’s five permanent members and has been blocking efforts to begin formal negotiations on UNSC expansion stating that there is no need to rush through the reforms. It is almost certain that without China’s support, UNSC reform is not possible. Hence, Germany and France offering their support to Africa for UNSC permanent seat looks like another attempt by the West to compete for influence in Africa.