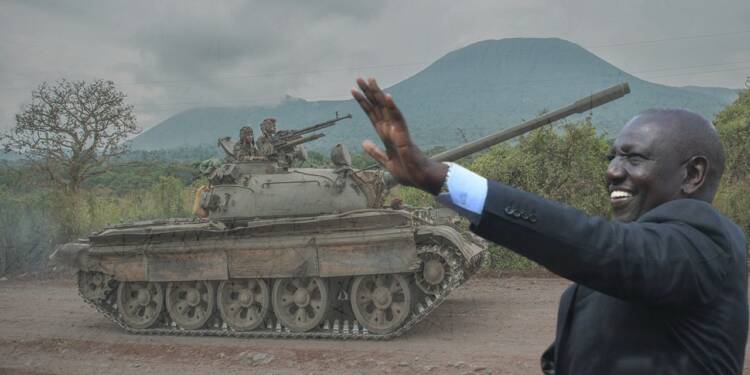 DRC-M23 crisis: Kenya envisions a stronger Africa and is taking concrete steps for greater African unity. Kenya has today become a central player in the East African Community. President Ruto has been strengthening Kenya’s relations with other African countries and working for African unity. Once again, Kenya has proved with its actions that it is ready to play the “big brother” role in Africa and ensure peace, progress, and security in the continent.

As per a report, M23 rebels have agreed to continue their “orderly withdrawal” from conquered territory in the eastern Democratic Republic of Congo (DRC). The statement has come from former Kenyan President Uhuru Kenyatta. Uhuru Kenyatta, who plays a mediating role in this conflict and also represents the group of five East African countries, spoke with M23 officials, according to a press release by the former president released after carrying out a meeting in Kenya’s coastal city of Mombasa.

The former Kenyan President has said, “As a pledge of goodwill to work towards a settlement in North Kivu, the M23 leaders have agreed to continue their orderly withdrawal and to respect a strict ceasefire,”. Further, “they also agreed to continue to respect and cooperate with the East African Regional Force (EAC) which has begun to take control of the areas from which the M23 has just withdrawn,”. These withdrawals of the M23 follow the decisions of a summit which, on November 23 in Luanda, had asked for a ceasefire and the departure of the rebels from the areas conquered for a year.

The DRC-M23 crisis has caused tensions between the Democratic Republic of Congo (DRC) and Rwanda for a long. DRC has accused Rwanda of actively supporting the M23 rebels and many Western countries and the UN has also accused Rwandan troops of fighting alongside the M23 rebel group in the eastern Democratic Republic of Congo and providing it with weapons and support. Political instability and DRC-M23 crisis for a long have cost Africa dearly and hampered its progress while being dependent on Western aid and assistance. In the name of providing economic and military assistance, the West has only used it as an opportunity to further its geopolitical objectives.

However, more and more African countries today have realized that depending on the West doesn’t help solve their problems and have been taking steps to forge regional alliances and cooperation to deal with their internal affairs. Among those countries the example of Kenya is noteworthy. Kenya has been tirelessly working to consolidate the East African Community where Kenya would be a major player. Most specifically, ever since William Ruto became its President, he has been working on his regional plan. He visited at least 7 countries in the initial 70 days. He emphasized enhancing trade, peace, and security ties. Further, meeting with every head of state in the Horn of Africa, Ruto promised collaboration to address enduring problems such as conflict, hunger, and business.

Ruto sought to enhance Kenya’s central role as the region’s anchor for peace, stability, security, and economic prosperity. As part of these efforts, Kenya’s Defence Forces troops have been deployed earlier to DRC as part of the East African Community’s Peace Mission. Kenya is also willing to take the Intergovernmental Authority on Development, the IGAD leadership.

Thus, Kenya’s mediation role in the DRC-M23 crisis will only bolster its role as a major player in the region. It is to be noted here that, years of Western intervention have only made the crisis worse while tensions between Rwanda and DRC have significantly grown recently.  Earlier, the Democratic Republic of Congo’s army had called M23 rebel withdrawal a “sham” and said the handover of Kibumba town near eastern Goma city to a regional African force, is meant to distract locals and the global community, adding rebels are reinforcing their positions elsewhere.

Hence, if Kenya indeed succeeds in bringing about peace and stability and finds a peaceful resolution to the ongoing M23 crisis in DRC, it would be a huge achievement for Kenya. To this point, Kenya’s President William Ruto has been tirelessly working for greater African unity in economic, trade, and security matters and his actions have proved that Africa can deal with its issues on its own and solve them through greater regional cooperation without the meddling of the Western world in its internal affairs. Therefore, if Kenya facilitates the peace process in DRC, it will be yet another feather in its cap.