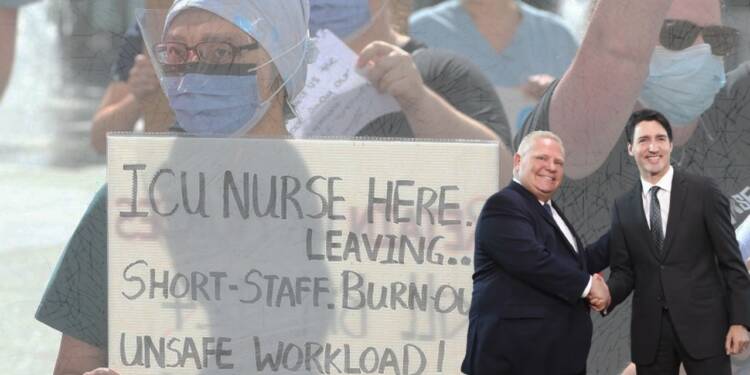 Doug Ford heatlh Plan: Canada- a country with one of the best healthcare facilities around the world. Make no mistake, that identity is now lost. That identity lost its way when the country fell into the hands of a person who is a disgrace to any democracy, a dictator. Canadians are suffering, the healthcare system is ailing and the Prime Minister of Canada is just donning a smiley-face.

The liberal leaders in Canada are busy spreading liberal views throughout the fabric of the country but what demands urgent attention has faded into oblivion. Thanks to Trudeau and his liberal lackeys holding the premier chairs in some of the Canadian provinces. Staff shortage, lack of hospital beds, shortened operating hours, long queues in front of emergency rooms, all this is now becoming commonplace in Canada. So commonplace that the administration in Canada has now gotten used to it.

Rather than evading the health crisis that has gripped the nation, liberals in the top seat are taking mindless actions that will do nothing but exacerbate the crisis even further. We know hospitals in Canada are already suffering with staff shortages and the smart premier of Ontario has finally come up with a plan. Doug Ford has unveiled a plan for Ontario that would shift thousands more surgeries and diagnostic procedures from hospitals into specialised community clinics. The plan would start with cataract surgery and work its way up to hip and knee replacements the following year.

Premier Doug Ford said on Monday that the change, which was first hinted at last week, will increase the 26,000 procedures — including MRIs, CT scans, and colonoscopies — that are currently performed annually in 900 independent health facilities across the province, freeing up time and space for more complex care in hospitals. “Ontarians are still waiting too long for their treatment, for surgery, and more needs to be done,” he told a news conference with Health Minister Sylvia Jones. “The status quo is not working.”

The plan of Doug Ford is bound to have some grave repercussions and the smart premier of Ontario is too smart to realise that. The plan has sparked worries that physicians, nurses, and other medical staff will choose to work in independent health facilities instead of hospitals, where day surgery patients are less challenging and procedures are typically performed on weekdays without demanding overnight and weekend shifts, where staff shortages are already an issue. “These workers will come from the same pool,” said incoming New Democrat Leader Marit Stiles.

“Whoever is left behind in our hospitals will be the folks that are going to be dealing with the most vulnerable and increasingly complex patients and populations.” Doug Ford said the plan will remain in place after the pandemic backlog of 206,000 surgeries and diagnostic procedures has been cleared. “This will be permanent,” he said.

Experts and healthcare unions have cautioned that funding for private clinics may put further burden on the public healthcare system. They contend that nurses and other medical personnel may quit the public sector for a facility offering better working conditions or salary, leaving hospitals understaffed.

Concerns have also been raised about upselling, in which a doctor gives a patient option between OHIP-covered services and privately funded ones, thus leading to confusion and unforeseen costs.

Canadian healthcare is having a tough time and the liberals in power are not viewing it as a serious concern. They have megabucks to offer for their liberal propaganda. Provincial premiers across the country are clamouring for federal cash needed to resuscitate the healthcare but what is actually getting the attention and cash from the federal government is Trudeau’s tokenism regarding LGBTQ issues. Justin Trudeau and his liberal breed is bagging criticism on the world stage for their mishandling of the country but still they are paying no heed. It seems that facing humiliation over their inactions has become the butter to their daily toast.

Why should we conserve biodiversity? 10 reasons and explanation