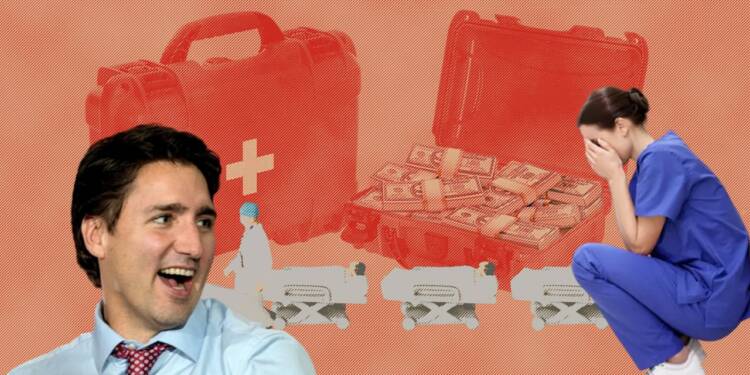 Hospital beds in Canada have been inundated with people suffering with one or the other malady but the federal liberals have been kicking the crisis down the road for this long. The provinces in the country have been voicing concerns that Canada is walking on the path to become an ailing country but the government has been ignorant enough to lend their ears. But now the country’s patience has been tested enough. Even federal liberal’s own allies have turned against and are claiming a breakup of ties if this attitude of the government continues to persist.

Needless to say, the Canada government’s behaviour towards healthcare which is on a ventilator support is worrisome. It has been reluctant to funnel any funds in the healthcare sector. And now when there seems to be a deadlock between the federal and provincial governments on the future of healthcare in the Canada, Justin Trudeau has finally spoken up.

Trudeau indicated in a year-end interview with The Press or Canada on Monday that he is unwilling to push healthcare reform any further, even as provincial premiers clamour for more federal cash to support their weak health-care systems.

“It wouldn’t be the right thing to do to just throw more money at the problem and sit back and watch the problem not get fixed because we didn’t use this moment to say, ‘No, no, no, it’s time to improve the system,'” Trudeau said.

Read More: The demographic war on Saskatchewan, that is slowly but surely changing the province

The impasse occurs as children’s hospitals around the country are swamped with children suffering from respiratory ailments. In certain situations, hospitals have been overwhelmed by the disastrous mix of record numbers of sick patients and extremely inadequate staffing levels.

The issue dates back more than a year, when provinces initially asked a meeting with the prime minister to discuss long-term and sustainable funding increase following the pandemic strain, which left them with massive backlogs and a burnt-out workforce. They want Ottawa to cover 35% of all healthcare costs in Canada, up from the current 22%, by boosting the Canada Health Transfer.

Trudeau told them that those debates would have to wait until after the epidemic, but he committed $2 billion in one-time assistance to help them get through the Omicron wave. The prime minister now claims that the system requires reform and that he will not give up the money unless the provinces commit to change.

The federal government does not appear inclined to join the provinces at the table just yet. Now, the government is imposing performance measures on the provinces that are bound to affect their accessibility to Canada Health Transfer. “I don’t think the federal government has the right to impose such performance indicators on the broad kind of health transfer,” said Haizhen Mou, a professor at the University of Saskatchewan who studies health policy.

A more politically palatable situation might be to offer targeted funds for specific priorities and sign individual agreements with each province, she said, rather than treating them all the same way. Healthcare activists, including nurses’ and physicians’ associations, have appealed before Trudeau  for an immediate plan to reform Canada’s failing system. Instead of paying diligent attention Trudeau has come up with a performance parameter which will again push the issue down the drain.

Now, what raises a question is the government’s cautious tone while aiding healthcare but when it comes to his woke agenda he never gives a second thought before throwing away billions of dollars. The government never shies away in announcing healthcare insurance plans allowing the liberal breed of Canada to claim ‘gender affirming’ services but Canadians suffering with serious health issues are left to die.

Read More: Liberals look for humanity in school violence criminals at the cost of the children’s safety

“We’re absolutely willing to invest much more in health care, but there have to be clear commitments and results that are going to change things for Canadians,” Trudeau said. But, did ponder this much while funding $100 million for 2SLGBTQI program? Certainly, not. Trudeau’s manoeuvres make it all clear that it would be a cold day in July to bring Trudeau on the same page with the most pressing issues. When the impasse between the two sides of the government seemed to come to an end, Justin Trudeau has again annoyed us with his stubborn attitude. Now, it seems with Trudeau it’s always one step forward and two steps backwards.

Is Al-Shabab a UN puppet, latest developments strongly suggest so