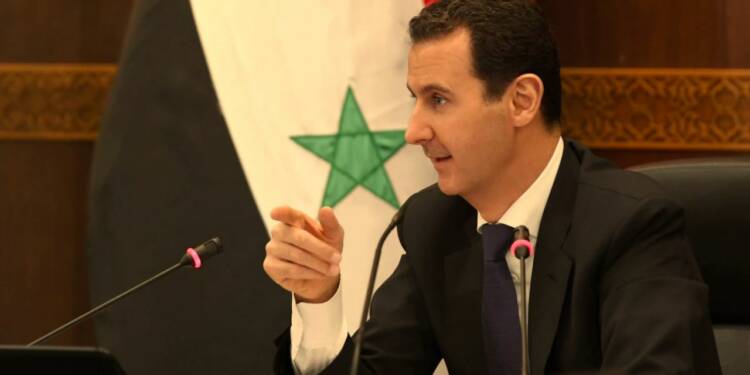 Throughout the Middle East and North Africa region, governments have gone through a sea change. They have, at regular intervals,  collapsed like a house of cards ending decades of dictatorship and ruthless rule. Most of the governments in the MENA region have left the legacy of fear, poverty and bitterness behind but Bashar al Assad still continues to sit in power.

The region has seen the fall of many dictators but ousting Bashar al-Assad from power still remains a dream for many in Syria. Despite the fact that his removal from power is being sought by the U.S.-led Western allies including Saudi Arabia and Turkey, he remains to be in power for the last 22 years. What’s stopping the US troops from driving through the streets of Syria? What is making the regime of Bashar al-Assad immune to US invasion?

Be it Muammar Gaddafi of Libya or Saddam Hussien of Iraq, all were toppled but the strongman of Syria continues to lead the country. Let’s have a glimpse of Bashar al-Assad’s path to power. Assad was raised in a world of influence because his father assumed office when he was just five years old, but he never intended to become Syria’s ruler. The second-eldest son and third child of President Hafez Assad, Bashar instead decided to pursue a career in medicine.

He earned his medical degree in ophthalmology from Syria’s University of Damascus in 1988 and then began working at a nearby military hospital before relocating to London to continue his education. There, he met the British-Syrian woman who would become his wife and lived in secrecy for two years.

Read More: West will care about ISIS only when it is in Syria

When Bashar al Assad was residing in London, he got an unexpected call in January 1994. Basel, his older brother, had died unexpectedly in a car accident. In order to assume his position in the succession, Bashar al Assad was called back to Damascus. And this is how Assad went from being a doctor to becoming a dictator.

Since 2000, the Bashar al Assad regime continues to flourish, unlike its other MENA region partner nations where governments were toppled by US forces. Iraqi president, Saddam Hussein’s government was overthrown by American troops in 2003, bringing an end to three decades of Baath Party rule that sought to elevate Iraq to the pinnacle of the modern Arab world but also left a legacy of fear, deprivation, and resentment.

The fall of Baghdad marked a climactic moment and a clear turning point in the war that the Bush administration launched 21 days ago to overthrow Hussein’s government and remove Iraq from what U.S. officials claimed was a store of weapons of mass destruction. Baghdad’s fall was celebrated by thousands of Iraqis eager to heap scorn on their leader.

Similarly, in Libya, the ruthless regime of Muammar Gaddafi collapsed in the aftermath of NATO military intervention and eight months of intense conflict. In February 2011, as demonstrations against Muammar Gaddafi’s authority erupted in Libya, the government’s security forces reacted by opening fire on the demonstrators. Pro-Gaddafi forces started a vicious conflict, bombarding civilian areas indiscriminately, detaining thousands of protestors and other people thought to be supporting the opposition, keeping many of them in covert detention, and carrying out summary executions.

However, following a military intervention by the North Atlantic Treaty Organization (NATO) and eight months of intense fighting, Muammar Gaddafi and his inner circle found themselves surrounded and alone in Sirte, a coastal city in Libya and Gaddafi’s hometown. They had to move between abandoned homes to avoid the ferocious and indiscriminate shelling by anti-Gaddafi militias from Misrata, Benghazi, and other places that had surrounded them. Iraqi forces were rapidly defeated, and on April 9, 2003, U.S. forces took control of the capital, Baghdad.

We’ve seen the collapse of nearly every dictator in the MENA region but Bashar al Assad. Now, some might wonder why? Syria’s leader, whose removal from power is being sought by U.S.-led Western allies including Saudi Arabia and Turkey, has the military backing of Russia, Israel and Iran.

Syria and Russia have always had cordial relations, as did the majority of the Arab nations up until the Arab Spring. Russia has always stood behind Syria like a shadow. The Russian Federation officially entered the Syrian civil war on September 30, 2015, when President Bashar al-Assad’s authority came under growing danger.

The Syrian Arab Army has been depleted since 2011 due to constant combat and widespread desertions. Even with the assistance of Iran’s Islamic Revolutionary Guard Corps (IRGC), the deployment of Iranian militias and Russian mercenaries, and frequent shipments of Russian weapons, the opposition’s and extremist armed organisations’ march could not be stopped.

Idlib, Aleppo, Raqqa, Deir Az Zor, Hassakeh, Deraa, and Quneitra were just a few of the provinces that the Syrian government had lost control of during this infighting in addition to battling to maintain authority over Hama, Homs, and the region around Damascus. But, the opposition forces could do everything but topple Bashar al-Assad’s regime in Syria.

If we talk of Israel’s support, according to a report by the Israeli newspaper Israel Hayom, Israeli Prime Minister Benjamin Netanyahu had plans to assist Syrian President Bashar Al Assad in regaining international respect and for nations to resume regular relations with the regime.

“We haven’t had a problem with the Assad regime, for 40 years not a single bullet was fired on the Golan Heights,” Netanyahu was quoted by Haaretz newspaper as telling reporters who accompanied him on a visit to Moscow to meet President Vladimir Putin.

These statements clearly explain how Israel, one of the strongest powers in the Middle East supported Bashar Al Assad all throughout these 22 years.

Iran, Israel Russia continue to counter the US dominance in the region to date which is making it difficult for the Americans to invade the territory.

Hence, we understand how Bashar Al Assad continues to be the undisputed leader of Syria.