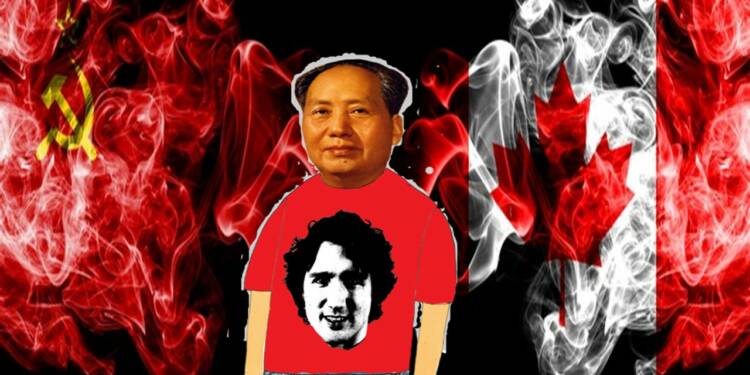 Canada: “When a student in a Calgary Grade 6 class came out as Transgender this year, the teacher made one thing clear to the other pupils: they mustn’t let slip their classmate’s new gender identity to her parents.”

In terms of transgender promotion, Canada’s federally-funded media monolith remain glued to a specific script. Sticking to facts and numbers, a critical element of the picture is perpetually shunned. It’s time to speak of the socio-historical aspect of hot-button issues surrounding Canadian government-endorsed sex change industry. While trans-training for Canadian school children permeates society, a vital component of the equation is intentionally omitted.

“While [Karl] Marx once alluded to a higher form of the family in communist society, he and Engels usually wrote about the destruction, dissolution, and abolition of the family.”

“The relationships they envisaged for communist society would have little or no resemblance to the family as it existed in nineteenth-century Europe or indeed anywhere else. Only by making the term family almost infinitely elastic can they be said to have embraced merely a reformulation of the family.”

Does the transgender phenomenon not fit this social model in a real and vital manner? Ofcourse it does– the very reason why CBC and corporate media in Canada wouldn’t touch these ideas with an 88-foot pole. Signs of a post-modern socialist revolution within Canadian society are clearly visible. Undermine the family unit, undermine the fundamentals of a society.

This is exactly what PM Justin Trudeau and his neo-communist,  Liberal government has successfully entrenched in Canada. “Some parents of children with gender dysphoria — the sense that their birth sex does not match their gender identity — are bristling at the role schools are playing. Teachers, principals and guidance counsellors, they complain, are essentially usurping the traditional responsibilities of mothers and fathers as they help advance children’s gender transition.”

“The Family is ceasing to be a necessity both for its members and for the state,” wrote Alexandra Kollontai, enfant terrible of the Russian Revolution, in 1919. Chairman Mao Tse Tung, founder of the Communist Revolution in China, saw the family as “institutions that kept the peasants oppressed so he issued several policies to break down the family structure.”

Now the concept begins to gel. Understanding communism’s relationship to the family, one gains an insight into the socio-political motivations of the Trudeau government. Turns out that Canada is presently undergoing a socialist revolution of its own. Functioning as a microcosm, a usurping of parental rights by the state elucidates this theory.

In 2023, child sexuality falls under state control. To kick against the pricks, as this British Columbia parent has done, results in the following punitive outcome:

‘BC father sentenced to 6 months prison for speaking out about daughter’s medical transition.’

How positively fascist it is. Or should we say, positively neo-fascist. We witness an unfolding of a new form of totalitarian control. Not Nazi-style, but rather “post-modern” in its nature.

“When Justin Trudeau said ‘there is no core identity, no mainstream in Canada’, he was articulating a uniquely Canadian philosophy that some find bewildering, even reckless – but could represent a radical new model of nationhood.”

Exactly correct. Trudeau’s post-modern socialist revolution is being sublimated by a mainstream media fuelled by federal government funding. The result is a ubiquitous deception of the Canadian people.

“It seemed like an odd message for a group of 11-year-olds, says the mother of one of the pupils.”

“Boards of education, education ministries and even the Public Health Agency of Canada are urging schools to both automatically honour a transitioning student’s request to change their name and pronouns — and to keep that information from parents if requested.”

“The way that I see it, the schools are triangulating the family — they’re becoming a wedge between the child and parent.”

Divide and conquer. It’s a concept as old as Sun Tzu’s “The Art of War” from 2500 B.C., and as recent as the Neo-Marxist movement on Canadian campuses.

“Schools have indeed changed “dramatically” over the last few years in their approach to transgender kids — but for the better, says Dr. Margaret Lawson, an endocrinologist at the Children’s Hospital of Eastern Ontario (CHEO) and head of the hospital’s gender identity clinic.”

Trans-for-children promoters rank among the most despicable citizens of our country. These people are as naive and foolish as the Euthanasia-fanatics, who also lack comprehension of the socio-political implications of the policies they push.

Yet, ever so slowly, common Canadians are getting the picture. The country is being converted from democracy to neo-communist state. Government control of children is fundamental to a born-again communist Canada.