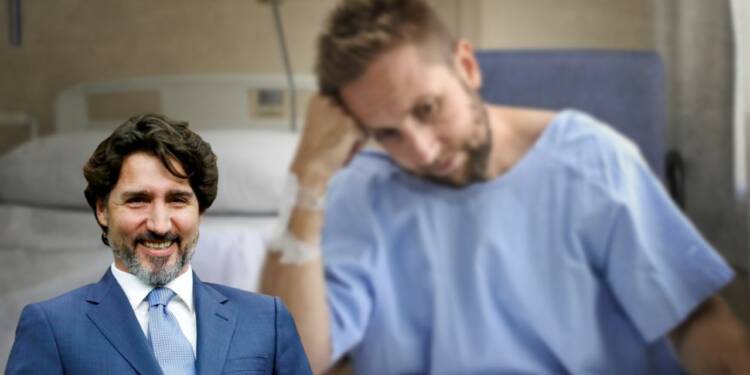 Organ transplants Canada: There is a common perception that you are not safe in Africa and South Asia but what is not common is that in Canada even your organs are unsafe while you’re still alive. Yes, you read that right, the dictator in Canada has turned the country into a living hell hole.

It is already in the air that China performs ‘thousands’ of organ transplants each year. China locks up 1.5 million Chinese to harvest their organs and pocket $1 billion every year. Nothing can be more heinous than having your own government harvesting your organs and selling them in the black market. For a long time CCP has been doing this to its population but now it seems Canada has also taken on the same path.

In Canada, it’s either Trudeau’s way or Trudeau’s way. If you aren’t mentally ill, the Canadian government is ready and impatiently waiting to take you to the other side. MAID (Medical Assistance in Dying) was a bill introduced in 2020 which relaxed eligibility criteria for medical assistance in dying and the evaluation process. It received harsh criticism from medical professionals and assistants who are often hesitant in providing assistance for death. The Liberal government in Canada is going off the charts on the metric of brutality and it seems to be happy about because it has an ulterior motive behind it.

According to a global analysis, Canada performs the most organ transplants from MAID patients among the four nations evaluated that allow this practice, and an increasing proportion of Canada patients who need medical help in dying ask to donate their organs for transplant.

The CTV News carried out a review in 2021 and the official publication of the findings took place in December 2022. And the first-ever research paper by the CTV News states, “We saw everyone is working in different directions. And then we said ‘OK, well, let’s start an international (discussion) with all the countries involved,’” said Dr. Johannes Mulder, a physician and MAID provider in Zwolle, Netherlands, in an interview with CTV News.

.According to the journal, doctors in Canada, where medical assistance in dying (MAID) was decriminalized in 2016, performed 136 of the world’s organ transplants following MAID. Data from the Canada Institute for Health Information confirms this new source of transplant organs accounts for six per cent of all transplants from deceased donors in Canada in 2021. Some organ transplants, like those for kidneys and livers, can be done with patients who are alive.

The cruel regime in Canada is first tricking the Canadians to get medical assistance in dying and then is compelling them to donate their organs. It is distressing to see how Canadians who are forced to death are giving statements like they want to do something good before the soul leaves their body. “If this body has deserted me, I could do something good,” is how patients in Canada are framing their decision.

Canada is leading the world in organ transplants for MAID patients and the administration is barbaric to be proud of it. While they might call it guidance, it seems like brainwashing. Before guiding the Canadians to the road of medically assisted death, they are transplanting their organs because of course; a cocktail of medications used for assisted death might damage or harm organs which would not be as lucrative.

Eight of nine kidneys from MAID donors started functioning normally nearly right away after transplant, according to one Ontario study of kidney recipients, and patients didn’t require even brief dialysis. Studies of lung transplants have shown similar success, with scientists now investigating the potential use of other tissue, including islet cells to treat people with severe diabetes

Read More: Ukrainian soldiers are ‘Guinea Pigs’ for US and EU’s undignified experiments

The shameless brutal regime is thinking of minting profits from the Canadians’ miseries. One would have never imagined that Trudeau would turn a country as peaceful as Canada into a place where people are manipulated into laying their lives. We were already distressed with Canada’s heart-wrenching trend of medical assistance in dying but little did we know that the country is also at the forefront of another emerging trend.