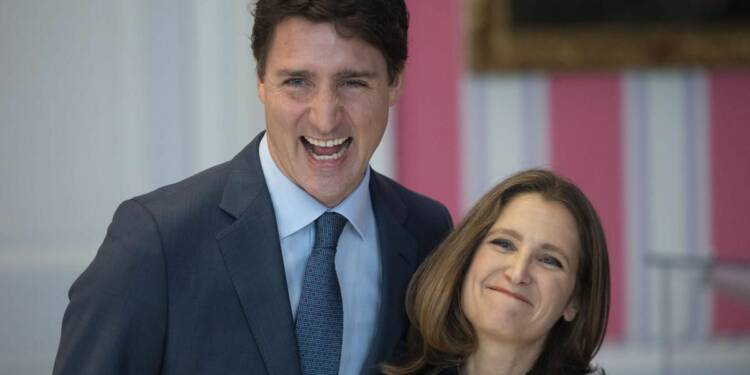 Canada Growth Fund: Trudeau’s government acts first and thinks later, a fact widely known to Canadians and to the world. Ever since Trudeau came to power, he has been massively trying to accumulate the Canadian taxpayers’ money for his personal benefit.

The liberal’s intention has not been right so far and not likely to get better in the near future too which is alarming for the Canadians. This time, a new piece of Trudeau’s chessboard has come into highlights, with Chrystia Freeland, Deputy Prime Minister and Minister of Finance openly begging for money.

A video clip from the Senate Finance committee released recently shows Freeland demanding funds to buy shares worth $2 billion in a company that doesn’t exist. This comes as a part of the Bill C-32 that calls for the establishment of the Canada Growth Fund but provides no details.

Elizabeth Marshall, a former top finance bureaucrat in the Government of Newfoundland and Labrador, questioned Freeland, by pointing out that such funds would only benefit Freeland as a minister and do not fall under any genuine legislation.

The Canada Growth Fund was announced by the government in the federal budget for 2022, which was presented on April 7. The $2 billion in funding was not included in the budget, but it was introduced in the Fall Economic Statement in November with few specifics.

The Canada Growth Fund was the subject of three paragraphs in the bill’s main body, but none of them dealt with the corporation’s structure. It’s ridiculous for the government to come up with such straight form of begging and not be prepared on how to cover the lies.

It should not be acceptable to ask for $2 billion to purchase shares in a company that does not exist and for which the government does not provide any information. The government’s own backgrounder on the Canada Growth Fund states that it does not have information on how it will operate and adds that it will come in “the first half of 2023.”

That is not good fiscal stewardship or governance, but it is indicative of how the Trudeau government operates these days. The Trudeau Liberals’ pay-me-now, I’ll tell you later strategy is the issue with the Canada Growth Fund and their handling of it. It is not the first time the government has done something like this and neither will it be the last but 2025 will be the year for Canadians and Liberals will pay as much as they have looted.