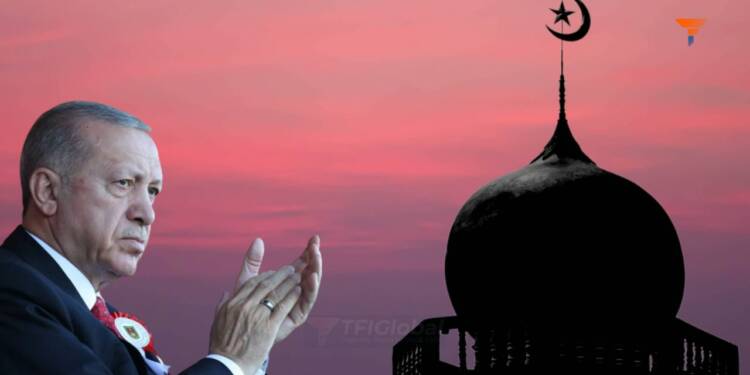 Turkey Crisis: When politicians realise that their time is up and the public is going to give them a befitting reply in the elections, they resort to using religion to secure their political points. This is precisely what Erdogan is doing right now. You remember, Erdogan right? The leader who is Chameleon personified.

Erdogan knows that his terrible governance will culminate in the downfall of his presidency, which has been marked by corruption and inefficiency. Therefore, Erdogan is trying to portray himself as a saviour of Islam. So Innovative, right?!

Turkey’s president announced the date of the nation’s parliamentary and presidential elections as 14th May.  Recep Tayyip Erdogan said that he would make the formal call on 10th of March following which Turkey’s Supreme Election Council would begin the preparations.

Erdogan’s election announcement comes at a time when Turkey is experiencing an unprecedented economic and financial crisis. The inflation rate has risen above 80%, caused by the impractical policies of Erdogan’s administration which lowered the interest rates despite widespread opposition from economists and financial experts. While the people are compelled to cut their expenditure, the currency Lira has experienced record declining.  In addition to his extremely poor record on economic governance, Erdogan is facing huge opposition due to his authoritarian regime.

In fact, under Erdogan’s presidency, Turkey has fallen into political autocracy. In 2017 he rigged a constitutional referendum which enhanced his powers.  Similarly, he dismissed Central Bank’s governor, Murat Cetinkaya, without any justification and conducted a re-election following his party’s loss in the mayoral election of Istanbul.

Read more: Turkey wants to control Libya’s resources with UN’s blessings, but Russia is well ready to crush it

People of Turkey are tired of the false promises and crisis of Erdogan who is doing everything he can to prove that his administration is an outright catastrophe.

One of the most infuriating aspects of Erdogan’s regime is that it doesn’t tolerate a sign of little dissent. Sadly, Turkey’s government, apart from committing economic blunders, also systematically crushes peaceful political opposition.

On the foreign policy front, Turkey’s government is refusing to ratify the application of Sweden to join NATO. Why?

It is because Erdogan’s regime is furious with the Swedish government for allowing a protest outside the Turkish embassy in Stockholm. The matter is not limited to the protest only. The major problem is during this protest a copy of the Quran was burnt.  The Quran was burnt by a controversial Danish political figure named Rasmus Paludan. He is notorious for conducting other anti-Muslim protests too in Sweden.

Erdogan is extremely furious about this to the extent that he cancelled a scheduled visit of the Swedish defence minister, Hulusi Akar, to Ankara recently. Now, elections are approaching in Turkey and the people are going to vote on the basis of Erdogan’s performance in economic, political and diplomatic areas.  However, as his decisions have resulted in a miserable situation for Turkey and chances of losing the elections are likely, Erdogan will deploy another strategy.

He will use his government’s treatment of Sweden, which wants to join NATO, in the election campaign to portray himself as the “defender of Islam”. Erdogan will try to manipulate the citizens through his ultra nationalistic and ultra religious rhetoric because he realises that the only way to save his presidency is by manipulating the public.

Apparently, the Turkish president is a weak politician, who is blind to the fact that the public remembers each and every blunder. As Erdogan has many, the chances of him getting defeated are high.

Because the King can never be wrong! Holness sacrifices his men over the SSL scandal