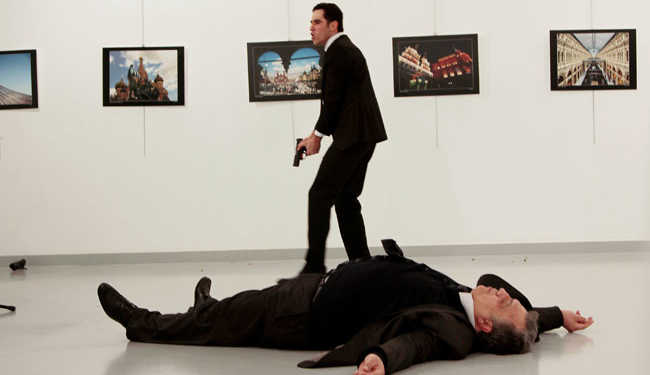 It was death in the midst of an art gallery. A place where human expression is portrayed in the form of paintings is replaced by an attempt to seek poetic justice for a larger suffering. That moment when the guard pulled the trigger on the Russian ambassador, it was a culmination owing to a country in ruins.

Perhaps such sporadic assassinations are scheme to two things. One pulls the trigger after geopolitically countries have been pulling strings in Aleppo and Syria. And the chaotic centrepiece of all the spotlight was Turkey.

Nobody can doubt or ignore the strategic location of Turkey which has its one leg in the mess of the Middle East and the other straddling across to inch closer towards the European Union.

Perhaps its placement in the realms of geopolitical flash points has made its foreign policy overlapping with many interests. This is compounded by domestic instability that is seething with emergency post-coup attempt and its incredibly strange relationship with ISIS.

Turkey domestically has been under the iron fist of its staunch Islamist President Recep Erdogen who’s conservative party AKP (Justice and development party) had come to power promising modernist outlook and purportedly supporting EU membership. Allying with Fetullah Gulen who is considered to harbour a pacifist counter view of Islam in form of Gulen movement, they both together upstaged the old establishment and supporters of both the sides dominated the elitist landscape of the Turkish society.

As seen in any form of an immiscible alliance with the quest for dominance, the togetherness broke off amidst serious corruption allegations against the ruling AKP and Gulen movement had to exile itself in the United States. From that aspect of forging an idealistic coup of sorts with AKP and the Gulen movement hobnobbing for pacing the Turkish society into its so called modernity, Ankara has plunged into centralisation with the ruling class having an uneasy relations with the military which is regarded as the guardian of Turkish democratic principles.

Ironically the military has attempted coups before and the one recently to upstage Erdogan was blamed on them along with the Gulen movement despite the overwhelming factors which some say it as a supposed false flag by Erdogan to centralise power in Ankara. As seen how Arvind Kejriwal purged Bhushans and Yadavs of his party to secure hold and blame rem for conspiring against him, Erdogan may have actualised the same as academics, teachers and supporters of Gulen are being purged and detained all over the country along with said coup plotters in the military. Attempts to clamp down Internet, protests emanating out of graft allegations against AKP leaders and the said tactical support to ISIS which was even highlighted by a Wikileaks revelations had pushed Turkey from the promised renaissance into an era of uncertainty and subtle authoritarianism.

This internal chaos has sort of reflected in topsy-turvy attempt to stamp its authority over the region where its interests lies in Syrian conflict and especially its continuing foray to resist Kurdish fighters. NATO, resistance to Kurds, chaos in Iraq, complex relations with ISIS, civil war in Syria and its relationship with the west, Russia and the EU together makes multiple layers of theatres Turkey has to engage itself into and ups and downs at home have patterned in to flip flops in the foreign policy arena with strategic interests notwithstanding.

Although it has harboured an anti-Assad stance over the years aiding the rebels and the resistance army, it’s overtures to Russia (Pro Assad)over Allepo ( which is reeling under after effects and in ruins) in securing a peaceful end to the conflict and its participation in the tactical Russia Iran Turkey axis may have postured a tilt away from United States.

So when the Russian Ambassador was assassinated over his accusations pertaining to the horrors of Allepo, it perhaps was a snapshot of the precarious situation Turkey has embroiled itself in its tumultuous policies in the region coupled by its internal chaotic factors that has nothing but seconded it.

As the attempts to sketch Turkey as a society upholding democratic credentials with a mix of moderation in religion and modernist look out is in jeopardy with a region that is mired by dictators and monarchies fuelled by religious fervour. Multi layered conditions with Erdogan asserting more control than restrain, it may in actuality push the country on a similar pathway to its despotic neighbourhood.