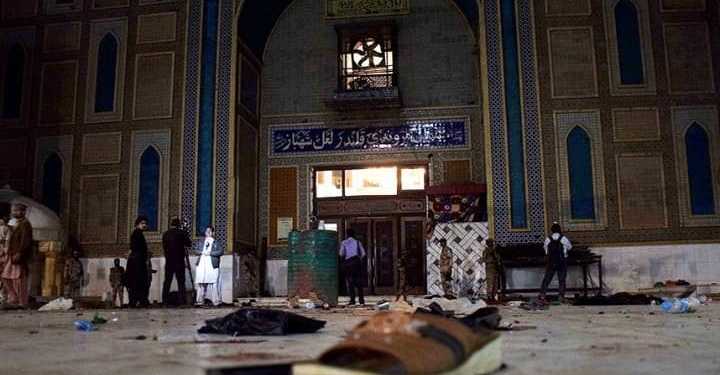 Another terrorist attack happened in Pakistan. One more Sufi shrine was attacked in which dozens have lost their lives.

For the hardliner Wahhabi Sunnis everything else that doesn’t conform to their ‘rule book’ is bad and has no place in their god’s world. Though loss of lives of humans anywhere is a despicable thing, the frequency at which lives are lost has made the readers of elsewhere immune in their responses. Except routine condemnations, nothing much is done to prevent such attacks.

Well, to prevent such terrorist attacks, not only Pakistan’s establishment but establishments everywhere don’t have the most required thing: WILL. Most of the sovereign administrations treat these attacks as one of the incidents, and the reason behind such a callous attitude is they believe in being liberal. Well, in a liberal system, accused are entitled to legal recourses but not the victims.

With conflicts between ever changing social values and behaviour, the attitude that tries to accommodate foreign cultures hampers even acknowledging the root cause of the problem for fear of being branded one as jingoistic to fascist. They question why I should, the learned man stoop to the level of the illiterate gun-trotting, brainwashed youth who kills others; pre-empts any action to contain the malicious disease of hatred and intolerance. Often those question the perpetrators of hatred and intolerance are branded of spreading hatred and intolerance, as was seen everywhere in the world, from India to World.

The problem with the spread of Abrahamic religions throughout the world is not that they are foreign to many of the nations, but they demand allegiance to the power centre situated in a particular place, by all followers. This goes against the very concept of nationalism. More than the ‘foreign allegiance’, it is the imposition of customs and practices of the ‘holy land’ and demanding the new converts to abandon the native culture and embrace the culture of new faith. This culture part goes against the very concepts of evolution of native culture based on the ambiance.

To those who argue cultural change is integral to expansion of all religions, here is the answer. The expansion of Hinduism and Buddhism in the east have not changed any native customs. This could be seen the localised deity forms of Buddha and Rama in the east. In fact, it is not mandatory for any Buddhist to be loyal to any of Buddhist sanctuaries in India or Tibet or any other place including Bodh Gaya. Same for the Hindus staying in Thailand or Malaysia. It is not mandatory for anyone to visit Kashi or Rameswaram and be loyal to only one place. Most of the tourists from the east come to India, much like tourists within India visit these places.

In Hinduism and Buddhism, or even in Jainism and Sikhism, blasphemy is not proclaimed by authorities as a sin. In fact, the questioning of self and Brahman has led to a variety of philosophies that gave birth to these religions and within Hinduism, there are many philosophies that contradict one another. Even in India, the customs and practices of Hindus are not same but change for every few hundred miles.

Though Christianity, with many internal sects came to recognise the Papal authority as final one, by being liberal in its present ways of alluring and recognising past crimes in the name of conversion, at least in part has presented a progressive face in the current era.

Contrary to this is Islam that has seen degeneration in the last five to six decades. Though Islam too was enforced by force to convert people of new lands, in the last two centuries, Islam gave up using force to convert people. Then, all of a sudden oil was discovered in the deserts and the nomadic tribes that were controlled by various Sheiks in their fiefdoms became rich. And the rich need a religion – for them and their people. It was then, the Wahhabis took the administrations under their vicious control. The lands that were famous for belly dances have started covering their females. And that was just the beginning. As Wahhabis control the holy lands of Islam and declared their sect as the true and only Islam, they started attracting Sunnis elsewhere, anywhere in the world.

Nations like Pakistan, which were borne out of guilty conscious accumulated by Muslim Aristocrats over centuries have simply swayed to the tunes of the venomous doctrines of ruthless Islam, while suppressing other softer versions of Islam. Never Indonesia, the largest Muslim state had any problems of naming their children in a language that resembles with Sanskrit. However, with the oil money, Wahhabis have set themselves on an expansion spree – of spreading the Sunnism, in the orthodox way affecting cultures in all the countries with Sunni population.

Slowly the attire and practices of Sunnis have changed all over the world. From idolising the Quaid-e-Azam, who sports clean shaven face and a whiskey lover, Pakistan has denigrated into considering the likes of Hafiz Saeed as representatives of the religion. Even in India, it was difficult to distinguish Hindus and Muslims, based on attire. Well, now things have changed. Islam in India and Pakistan has transformed itself into a Burqa clad, Beard sporting one.

Not only Pakistanis, but many Indian Muslims started looking to Arabs, who control the holy lands of Islam, with reverence. The oil money seeped into Indian subcontinent and the mullahs brainwashed the poor Muslims, who could not educate their children. Within the span of three decades, we see larger population that has allegiance to the Arabs, considering their own forefathers as ‘evil worshippers’. The overt support provided by the middle-east countries to all places where Muslim population exist has now started threatening the national sovereignties.

All the while, Wahhabis practise discrimination against Indian and Pakistani Muslims. Even the support to Pakistan stems basically from its being a nuclear country that may come handy in case they need to deal with Israel. To keep Pakistan in the fold, the mythical ‘Ghazwa-e-Hind’ is ingrained into the psyche of Pakistanis so that they remain hopeful to control entire India one day, after Islamising entire nation. Pakistan, bestowed with large agriculture tracts, ports and minerals in its territory has denigrated itself into a terror torn, yet a breeding centre to terrorists instead of becoming a robust economy due to its locational advantage of being a transit point between the middle-east and the east. And everything that helped to this denigration has sprung out of its religious identity and related aspirations. And neither the identity nor the aspirations have nothing to do with the geographical nation that Pakistan is, but has everything to do with its religion.

Even India is not immune to the spread of religion loyal to Wahhabis. But, the supporters and followers of Wahhabism fail to see through the larger ambitions of their masters who denied entry to Syrian refugees, but gave donations to build mosques in western countries that allow migration of these refugees. Wahhabis so far not succeeded in conquering their neighbours despite the continuous fight that enveloped entire middle-east for more than half a century. The pro-democratic liberals have becomes pawns of this extremist religious expansion when they played into the hands of Wahhabis, when they supported ‘risings’ against much stabilised countries like Egypt and Libya. Of course, they too make money out of these uprisings by supplying armament to both sides of warring factions.

Though Islam existed in the sub-continent for over a millennium, it was practised in much domesticated form, where loyalty of Muslims were with the motherland. Wahhabis are trying to change the very concept of being loyal to one’s own place, by demanding loyalty to the brotherhood. True, not only the western world, but even the eastern one is too strong for the brotherhood to fight a direct war. But, they don’t intend to fight a direct war and it is more frightening.

Sufism was often presented the face of Indian Islam (including Pakistan) that represents pure compassion. If Kabir lives today perhaps he would be assassinated by Hafiz Saeed & Co., for not being Muslim enough to satisfy the conditions of Wahhabis. The same can be said even for Jinnah, Maulana and Iqbal. What in their over enthusiasm Wahhabis overlooked was that by removing the ‘mask of peace’ they are exposing their dark and ugly side of religious politics that has nothing to do with spirituality.

The problem now is not restricted to sectarian conflicts within Islam, but involves entire world. And the conflicts are not only restricted to only Islamic sects, but involve others living in a plural society. It is alarming that most of all, the establishment of Pakistan doesn’t decry the methods of Daesh or Taliban much. Maybe they are already convinced that living like Arabs is better than the way they are living now, even in much greener plains. But, such an attitude would be looked down by their own future generations. By the time the oil money is exhausted, there would be scores of militants everywhere in the world who try to enforce their convictions on others.

It is time all governments including India and Pakistan consider the threat of Wahhabis seriously, before they transform all nations into deserts.