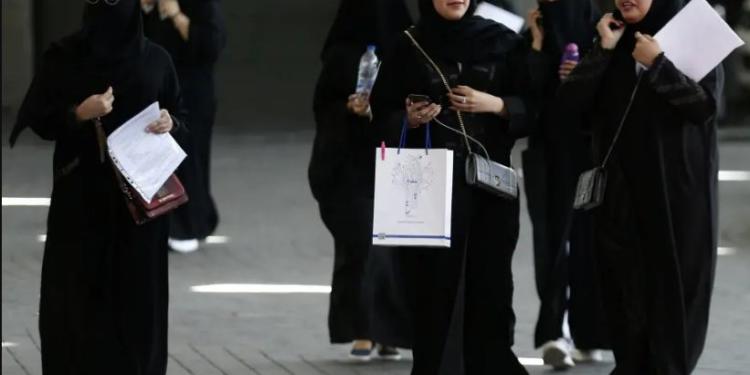 Now, track your woman with an application on Google Play Store and Apple’s App Store. New upgrade in Saudi social constructs now allows men to track the activities of women they have “responsibility” of through Absher app.

Created by the Saudi government, Absher allows Saudi men to grant and rescind travel permission to women. It also allows the man to set up SMS alerts for when the woman uses her passport, or when leaving certain areas. This may be seen as a modern booster for the male guardianship system in Saudi Arabia.

The Saudi male guardianship system is a regressive archaic practice in the Kingdom of Saudi Arabia. Mandated to have a male guardian, a woman through the entire course of her life may be passed on from one ‘guardian’ to another, that is, from the father to the brother and later from the husband to the son. Saudi women of all ages need to seek permission from their ‘guardians’ to do things like starting bank accounts, getting cosmetic surgery, travelling and also applying for passports, marrying or studying. Permission is required for even pressing charges naturally exempting the man himself from being taken to court over cases such as domestic abuse. Women also require approval for leaving prison, not to mention the harsh punishments meted out to them for the slightest of offences. In fact, one man’s testimony at court is actually equal to that of two women. They are also pressured to be accompanied by a male guardian when stepping out of the house.

Saudi Arabia is closely aligned with Wahhabism, a strict interpretation of Sharia Law. The country has capped women’s rights to a ghastly extent. Despite some baby steps towards consolidating the oppressed gender such as granting women the right to vote and stand in municipal elections, allowing them to drive and to work in certain domains, allowing women to spectate sports events in stadiums from seating rows segregated from the men, the regime’s perception of women is still humiliating and ignominious. In fact, the only Saudi robot citizen, Sophia, appears to have more rights than Saudi women. Coloured abayas are a luxury and, along with other reforms, are perceived by orthodox conservatives with scorn. Also, Critics of the regime are dealt with harshly and many women’s rights activists are imprisoned and tortured.

News of young Saudi women seeking political asylum abroad may seem trivial at first glance but understanding the risks involved in such adventures is paramount to the cause of women in Saudi Arabia. With the spread of the benefits of social media, the aspirations of Saudi women are bound to soar. Therefore, at times like these when crackdowns on women’s rights activists are prevalent, it a genuine let down that global giants like Google and Apple with the Absher app, have shown a tendency to assist authoritarian regimes to be more authoritarian with modern technological upgrades and in so doing, are facilitating gender discrimination and human rights abuses.