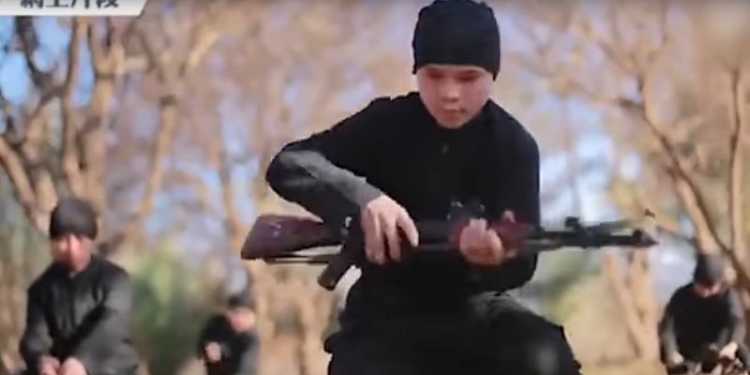 China the all weather friend and ally of Pakistan has repeatedly blocked Indian attempts in UN to ban Masood Azhar, chief of Jaish-e-Mohammad (terror outfit based out of Pakistan) is now facing terror threats from ISIS.

The ISIS has released a video in which they have pledged to shed rivers of blood in attacks against China.

The video contained disturbing images of children armed with assault rifles, praying and executing people who are presumed informants. This is the first direct threat to China by ISIS. But why China? China is not involved in any operation against militants in the middle-east. It’s neither a part of United States coalition forces nor is it backing Syrian-Russian operations directed against Daesh (ISIS). It just deals with oil producing nations for fuel just like other countries.

The main reason behind threat is the actions taken by Chinese government against Muslims located in Xinjiang province. There are about 10 million Uyghur Muslims located in Xinjiang. Last year the crackdown on Islamic rituals by Chinese Communist party made the news. Mosques were barred to make calls for prayer, fasting during Ramadan is also forbidden, children under 18 years are banned from entering mosques. The Muslims in China have been persecuted for years by Chinese authorities. This crackdown on Islam has been taken by Uyghur Muslims as attack on their rights. As a result they rebelled and attacked Chinese security officials.

According to a report Uyghur Muslims have carried out May 2014 terror attack in the Xin¬jiang region’s capital of Urumqi that killed 43 and wounded 90.

China dealt this with iron fist; it not only executed the radical Islamists but also punished the entire Uyghur population. Chinese officials have claimed that they have destroyed 200 terrorist groups and executed 49 militants since 2014 in Xinjiang alone.

The Uyghurs have a long history of conflict with the Chinese government. They consider themselves closely related to central Asian nations rather than China. They speak Turkish rather than Mandarin. Many have left their homeland to join forces with terror groups in Pakistan and Afghanistan. They are even part of Taliban who carry out attacks against Afghanistan’s government. Many Uyghur muslims have also joined Islamic Movement of Uzbekistan to assist Taliban in capturing the northern Afghan city of Kunduz which borders on Central Asia.

The oldest known group of Uyghur militants appeared in the 1990s that called themselves the East Turkestan Islamic Movement; they were loyal to Osama bin Laden and Mullah Mohammed Omar of the Taliban. Since both of whom are now dead East Turkestan Islamic Movement have now rebranded themselves in the Arab world as the Turkistan Islamic Party. A 2016 study from a Washington-based think tank found that 114 Uyghurs from Xinjiang had joined the Islamic State. According to it, Xinjiang has supplied the highest number of foreign ISIS fighters from any one province of the world outside of Tunisia and Saudi Arabia. In Syria, the Uyghurs have formed groups with people that share same historical and cultural background. Many have been inducted in Al-Nusra front (Al-Qaida division of Syria) terror units that have Uzbek, Tajik or Kyrgyz ethnicity.

The Uyghur militants have now also infiltrated into many South-East Asian countries like Thailand and Malaysia. In 2015 Uyghurs carried out a deadly explosion which killed 20 people at a Bangkok shrine that was packed with international tourists. The two suspects that were arrested were both of Uyghur ethnicity. The attacks were in retaliation to the deportation of 100 Uyghur refugees to China who were not given asylum in Thailand. Indonesia is also not untouched by the Islamic insurgency. The deadliest attack was in 2002 when more than 200 people were killed in a Bali club bomb blast. There was no direct hand of Uyghurs involved in terror attack but in Indonesia they fight alongside local Islamic militants and provide logistics support. As per Indonesian intelligence officials many Uyghurs were enlisted with the Islamic State group led by Abu Wardah Santoso who was the most wanted militant in the country till last year when he was killed by Indonesian security forces. Santoso’s terror base was located in the jungles of Sulawesi in Indonesia. The slain militant had pledged his alliance to ISIS.

The cancer of Islamic terrorism is not confined only to west, middle-east or South Asia. Its engulfing the world at a fast pace. Pakistan, the state-sponsor of terrorism has faced terror attacks by Tehreek-e-Taliban. The recent terror attack was a suicide blast in a Sufi shrine which claimed 75 lives and injured more than 200. Even after all this Pakistan’s partisan policy towards terror groups which spread terrorism in India is unchanged. No action against these terror launch pads has been taken. Pakistan had blocked India’s attempt to put sanctions on Jaish-e-Mohammad chief with the help of China. The recent threat by the ISIS should open the eyes of Chinese Communist Party who should support India in seeking sanctions on terror outfits run on Pakistan’s soil. Like its ally Pakistan China is also the birthplace of radical Islamic terrorism. All the attempts of Chinese government to check radicalism have been futile. If China don’t act fast then it will also be devoured by terrorism just like its partner in crime Pakistan.