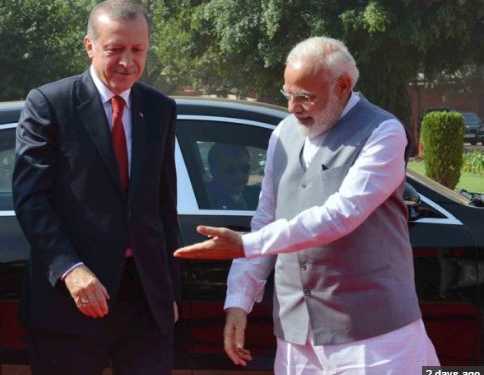 Though he calls himself a “conservative democrat”, any form of democracy is not acceptable to Erdogan unless it comes under the purview of his Islamist goals and principles. He certainly aims to make a post secular, post Ataturk Turkey, and has been steadily eroding the secular ideals on which Kemal Pasha had founded the republic after the fall of the Ottoman Empire in 1922. He might have come here with the much touted “fresh fillip” to India-Turkey relations, but India has no friend in either Turkey or least of all, Recep Tayyip Erdogan.

Turkey’s pro Pakistan stance is well known. There is a feeling of “brotherhood” between the people of both the nations, whether it be Pakistanis in large numbers going there for studying or tourism or be it the people to people contact between the two countries.

Pakistan of course sees itself as the guardian of Islam, and given its worship of the various Turkic invaders who used Punjab as a gateway to their barbaric invasion of India for eight centuries, it’s but natural that Pakistanis should worship Turks like they worship Saudis. A very chilling instance of this was seen during the Nov 2008 terrorist attacks in Mumbai, where in Trident; Turkish nationals were carefully separated by the terrorists while selecting the guests for brutal torture before killing them.

Erdogan’s relations with Nawaz Sharif’s family on a personal level are well known. But is it logical that these relations extend to the Sharif family alone and not to the military mullah nexus? Given these factor and ideological similarity between the two countries and the people-to-people connect; India’s leverage over Turkey is as good as non-existent in comparison to Pakistan’s.

Turkey’s relationship with India can never be independent of its ties to Pakistan – and therefore expecting Turkey not to side with Pakistan on disputed and vital issues between India and Pakistan would be sheer stupidity.

To give some examples, Turkish foreign minister Mevlut Cavusolglu had said his government fully supports Pakistan’s position on Jammu and Kashmir, and had supported Islamabad’s demand to send an Organization of Islamic Cooperation (OIC) delegation to the Kashmir Valley to investigate the alleged “human rights” violations by Indian army.

In addition to Kashmir issue, India’s bid for membership of Nuclear Suppliers Group (NSG) is another issue where Turkey fully supports Pakistan. Erdogan may have, during his India visit backed India’s stance to be a permanent membership in UNSC and NSG, but just last year, Turkey opposed India’s bid to NSG membership because Pakistan’s application was not considered. Hence it is safe to say that Turkish support is guaranteed only if Pakistan is hyphenated with India for the same honor.

India certainly shouldn’t have the ignominy to tolerate lectures on human rights by a country who has repeatedly denied the Armenian genocide of 1915-17 (1.5 Armenians were butchered by Ottoman empire) or whose sympathy for Daesh and repeated human rights abuse on Kurds is not a secret.

Erdogan is certainly the last person we need to invite for proving our secular and democratic credentials.

As Firstpost had put it “It is staggering to think that Erdoğan — who wields power as a repressive, paranoid autocrat and has cemented his position through a dubious referendum — has the temerity to lecture a democratic India on ‘human rights’.”

His preposterous claim that under his leadership Turkey’s democracy has strengthened over the years , has to be called for what it is :- a blatant lie. Because democracy there is in tatters, especially after he won the recently concluded constitutional referendum (changing Turkey’s ruling structure from parliamentary to presidential) in dubious circumstances – the country is virtually a one-man rule.

As per Daily O “In the aftermath of the attempted coup of July 15, 2016, at least 1,34,194 officials, teachers, bureaucrats and academics have been sacked from state institutions; 1,00,155 people have been detained; 2,099 educational institutions have been shut down; 7,317 academics have lost their jobs; and 4,317 judges and prosecutors have been dismissed. A number of Indian students who were studying in some of the 15 universities that have been shut down in the wake of the coup attempt had to return home without completing their education. Some Indian academics who were employed at these universities became jobless and their bank accounts were blocked by the Turkish authorities for months.”

Just before he landed in India, during an interview with the WION news channel, he proposed a “multilateral” discussion to resolve the Kashmir issue, saying that it is the only solution to stop casualties in Kashmir and to “prevent future generations from suffering”. One of the parties would of course, be Turkey.

Quite ironic from the President whose nation’s history and present is full of territorial/border disputes and conflicts.

Kurds, who comprise 20% of Turkey’s population, but even today, Turkey’s parliament prohibits speaking in Kurdish. Kurds have effectively been a people without a state, being significant populations in Iraq, Turkey, and Syria. Saddam Husseins murders of Kurds with chemical weapon is well known, but Turkey’s repression of Kurds has been equally brutal. The conflicts of Kurdish groups like the Kurdish Workers Party (PKK) and the People’s Democratic Party (HDP) with Turkish authorities are many decades old. PKK has been labeled a ‘terrorist organization’ by Turkey. Since the 2016 coup attempt, the hostilities between Turkish forces and PKK have again reached worrying levels.

In case of relations between Cyprus and Turkey, the latter refuses to recognize the former. One third of Cyprus is in Turkish hands virtually since 1974 as a result of a coup, and the issue still stands. Cyprus is still trying to reintegrate the northern part into the rest of the country.

In case of Greece, Turkey almost went to war with it in 1996 over Kardak islets , situated between Kalymnos (Greek island) and Turkey’s Bodrum Peninsula. Greece considers these islets to be part of its territory, while Turkey claims that it is “grey area” and hence cannot be in Greek territory.

Armenia, with whom it has closed its borders since 1993. As mentioned earlier, Turkey to this day denies the Armenian genocides of 1915-17 where more than 1.5 Armenians were murdered by Ottoman Empire.

In case of Erdogan’s Kashmir demand, India was prompt enough to dismiss such a request. All I wish was that India had retorted with the “self-determination” of Kurds, just to give him a taste of his own medicine. Or gave him some lessons on the background of the legal accession of Jammu and Kashmir to India, and that the UN Resolution on Kashmir had the categorical requirement for Pakistani security forces to vacate Pakistan Occupied Kashmir.

But all we got was the same boring cliché from PM Modi about how Sufism is a common ground between Indian and Turkish cultures, and Rumi’s notion of tolerance and pluralism celebrating the spiritual synergy between the two countries (whatever that means).

Turkey, while showering “warmth” on India in matters like support to India’s entry into the Nuclear Suppliers Group (NSG), reforms in the United Nations Security Council (UNSC), resolution of the Kashmir issue bilaterally between India and Pakistan, wants Indians to teach and feed Syrian refugees in the country, academic tie-ups with Indian universities and increasing Turkish scholarships to Indian students studying in various Turkish universities.

This agenda was explained by a group of academics, journalists and advisors close to President Erdogan to The Guardian, a day before he left for India “Turkey is hosting around 3.5 million refugees who have fled conflict in neighboring Syria. During President Erdogan’s visit, we will also ask India to support in teaching and feeding these refugees. And for that we will have to run joint academic and food programmes. We hope India will agree to that.”

Certainly, why shouldn’t India agree? After all, as Sita Ram Goel said, Pakistan and Bangladesh are fixed deposits but India is joint account, to be looted at will with secular blessings. With Bangladeshis carving out the north eastern Indian states, 3.5 million Syrian refugees will be such a welcome addition.

Erdogan was given an honorary doctorate at Jamia Millia Islamia, and he thanked them saying that he was delighted to receive the Doctors of Letters from a university which has played a pivotal role not only in India’s freedom movement but also in the Khilafat movement. He noted “Terrorism can only be fought by tackling poverty and inequality. It will be unfair to blame religion for terrorism”. He attacked the Islamic state, calling it a “blasphemy” in the name of Islam and that it has no connection with the religion.

To sum it up, Erdogan, whose supporters see him as modern day amir-ul-mu’minin, who believes in the theory of khilafat or Islamic caliphate criticizes Al Qaeda and ISIS, who believe in the same ideals! He said “we shouldn’t become tyrants by becoming indifferent to the sufferings of others” while the Turkish air force carries out strikes against the Kurds! He accuses Bashar Assad of human rights abuses but has no issues about using chemical weapons against Kurds just like his friend Pakistan has no problem using them against the Baloch.

It is no secret that US NATO has fueled the civil war in Syria by routing thousands of trained jihadis through Turkey.

Islamic State militants were trained and armed in Turkey. Turkey reaped rich rewards for export of some $3 million worth of oil of the IS on a daily basis. This was put to an end when Russia bombed hundreds of tankers travelling between Turkey and IS-held territory. General Michael Flynn, NSA adviser to Trump administration for a short period had gone public in 2014 saying that the appearance of Islamic State and Jabhat al Nusra was “willful decision” of the US.

India has got little to gain from such a dubious regime which is buddies with its hostile neighbor (whom India still continues to give the most favored nation status, sadly). While it is true that trade should never be hampered, India can scarcely afford to have a newly Islamized Turkey playing spoilsport in its neighborhood when it is still counting the damage done to it by Wahhabism import from Saudi Arabia.