So, an Indian Businessman and a Leaked Story are behind the Javed-Nawaz fight 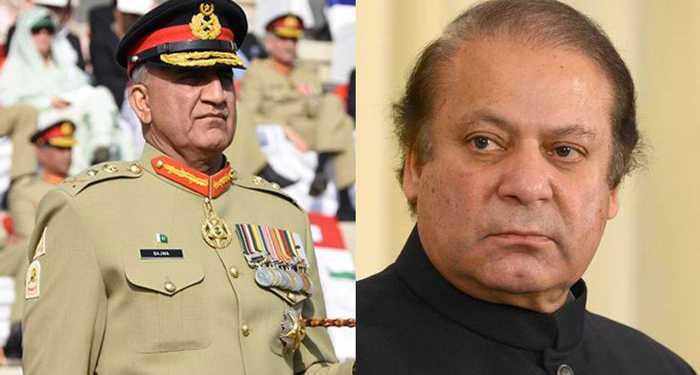 Lately Pakistan’s PM Mr. Nawaz Sharif, Mr. Javed Bajwa and Army Chief have been in news for a multitude of reasons, each more disgusting than the last. But the bone of contention precipitates to two major reasons: First, the sacking of Mr. Sharif’s aide and special assistant on foreign affairs, Mr. Tariq Fatemi. Secondly (on a lighter note), the informal meeting between Mr. Sharif and Mr. Sajjan Jindal, the Indian business tycoon in Muri, a hill station in Pakistan to spark back-channel talks between the nuclear armed neighbors.

Hitting the first point head-on, the military had demanded full implementation of recommendations by a committee which probed a story in the Dawn newspaper last October of a meeting at which civilian leaders confronted the military over its alleged reluctance to halt Islamist groups in the country. The meeting was held at PM Sharif’s office on October 3, 2016, within days after India carried out a surgical strike in PoK on September 29 to destroy terror launch pads across the Line of Control.

Mr. Sharif, being a prudent business man, knows that it is in the interests of Pakistan to be on the positive side of its neighbor.

He is the person who attends the global meets in international forums and has to blatantly explain Pakistan’s position on various events and outcomes knowing fully well the cause he is espousing is evoking laughter from the forum members not to mention the rest of the world who will be dousing themselves with the weekly laughter medicine from the antics of the stand-up comedian from Pakistan. It is a known phenomenon that when a terrorist attack takes place in any part of the world, the Pakistani diaspora (both domestic and foreign) google the nationality of the terrorist to confirm if they will be subjected to taunts the next day at office and social media sites.

Mr. Sharif who was aware about these parameters has been making a concerted display of subdued nerves only to wriggle out of it when a reprimand comes from the Rawalpindi headquarters. The covert and not-so-covert support for Islamist terrorists from the Pakistan army is well known and even applauded in certain circles. However, when the same terrorists strike, it is the Pakistani civilian government which has to bear the verbal carnage and their military counterparts, fade into oblivion.

Taking these facts into consideration, there was a meeting between the elite members of the military and their civilian counterparts where it was buttressed that the Islamist terrorists drive a wedge between the normal operations between India and Pakistan, snowballing any attempt to thaw the blizzard. This piece of information was leaked and the Army was of the opinion that it was purposefully leaked to the media to denigrate the image of the Pakistani Army which is held in high esteem in almost entire Pakistan.

This furor led to the crackdown on “Dawn” the daily which published this first and the journalist was also made a punching bag which led to widespread international condemnation of the gagged journalism of Pakistan. Now the international audience should adopt a wait and watch policy as to whether Mr. Sharif succumbs to the pressure mounted by the Pakistan Army ( he has already succumbed theoretically by expelling his top aide) or mounts a belligerent attack on the Pakistan Army which had already sent him to exile once (we all know the ball sizes of the Pakistani civilian government personnel is less than the shriveled nuts that fall down on the ground at the end of autumn season to be picked up by squirrels).

Coming to the second point, as an independent analyst, I would like to reprimand Mr. Jindal in the strongest terms. It has been proved innumerable times that notwithstanding the intentions of the Pakistani civilian government, any peace offering from India has only been reciprocated by violent retaliation. Right from, the Lahore bus diplomacy by Mr. Vajpayee (replied back by Kargil episode) to the Modi-Sharif bromance ( retorted by Pathankot) to the present informal meeting by Mr. Jindal to be retaliated back by the beheadings of soldiers. Of course, the Jindal initiative had the blessings of the Indian government without which it would not have been possible.

My father (being a teacher himself) often used to remark that the whip used for a donkey should not be used for a horse. However, I would tweak it a bit by saying that the reverse is also true. Generations of Pakistanis have been fed on an anti-India diet since eons. In fact, the birth of Pakistan, itself is stonewalled in the monolithic structure called hatred and it is this hatred that provides the staple food to the Pakistani army in no uncertain terms. Any bonhomie between the two nations is directly detrimental to the power and influence it yields over this rag tag of a nation (if you might call that). The icing on the cake is the BRAZENNESS, the resolute and unwavering brazenness, via which the Pakistani Army absolutely denies knowledge of any terrorist attack and even goes to lengths to dissuade journalists to visit the homes of the terrorists who have been caught overseas causing carnage because nothing hurts like wounded ego and nothing rubs in like fallen pride.

The Pakistani army and also thereby implying its nation is like the legendary fairytale character Rumpelstiltskin.

You just need to give it enough time without overtures of peace offerings to destroy itself. Of course catalysts like “surgical strikes” have to be provided in regular intervals to achieve desired results. The Jindal diplomacy was redundant and if I might daresay was counterproductive.

The remark that turned French Voters against Le Pen