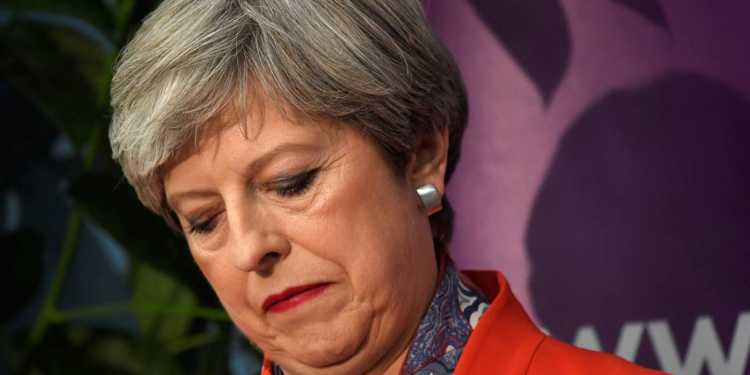 British Prime Minister Theresa May lost the general elections and her opponent Jeremy Corbyn didn’t win, now that’s a recipe for chaos. The result means no single party has majority. The British PM had a slender majority in the House of Commons but she wanted a comprehensive majority to push for a “hard Brexit”. She took a huge gamble by calling the elections three years early with opinion polls predicting a gain of at least 50 seats for the Theresa May led conservatives.The events that transpired on counting day came as a shock for everyone as the Conservatives ended up losing their majority leading to a hung assembly. So what happened?

The United Kingdom was heading for it’s most important negotiation since the World War II , when Mrs. May’s decision to call for snap elections took everyone by surprise. The main opposition party, the Labour party appeared to be in doldrums whose leader Jeremy Corbyn had survived a leadership challenge only last year. Victory for PM May appeared to be a forgone conclusion, but this was not to be the case. So where did the Conservatives lose the plot?

The UK has been seen one election after the another ever since ex-PM David Cameron was re-elected in 2015. This election was Britain’s fourth election since 2015. The referendums on Scottish Independence and Brexit are the remaining two. Despite leading in the opinion polls, what PM May didn’t take into account was perhaps the fatigue of the citizens to vote in yet another election in just two years. There was palpable disdain even among the staunchest of tory supporters when PM May called for snap elections.

The blame for putting the nation into elections after elections fell to and rightly so to the Conservatives. It started with David Cameron calling for a referendum on Brexit, which saw him putting his political career on the line. Britain has been divided ever since the referendum. The referendum should have never been called in the first place. David Cameron should have made his stand clear and ensured no Brexit would happen under his term. The same people who campaigned vigorously for Brexit refused to lead the country after it voted for Brexit.

Theresa May too was on the side of Bremain and perhaps can be taken as an accidental Prime Minister. Mrs. May’s decision to call for elections for a harder Brexit finally nailed the coffin for the tories . The people elected them to take tough decisions and the tories did exactly the opposite by putting the nation through successive elections.

The Labour party in no way had an impressive manifesto but the tories somehow managed to bring a manifesto which was the worst of the lot. The proposed ‘Dementia’ tax divided the country and the subsequent backtracking is sure to have hit the Conservatives hard. The rich old Britons were the party’s largest constituency and the tax would have hit the community hard leading to a huge dent in the party’s core vote base. Theresa May hadn’t run a campaign in a while and it was no surprise when she faced criticism for her style of campaigning.

Her campaign was widely described as robotic and rabidly anti-Corbyn and this criticisms gained surface when it became clear that she would not have majority in the House of Commons. Her refusal to debate Jeremy Corbyn also did not go down well. Whereas Jeremy Corbyn defied expectations by leading a grassroots campaign and hitting the right notes especially with the young generation.

Labour, under Jeremy Corbyn, ran what political analysts regard as an excellent and optimistic campaign, promising an end to austerity, more money for health and social welfare and free tuition. Labour gained 30 seats to reach 262. Despite being 68, Corbyn attracted a huge chunk of the young voters which speaks volumes about how disastrous was PM May’s campaigning.

Ridiculed, written off and almost dumped by his own party, Jeremy Corbyn ensured Labour’s strongest performance since Tony Blair. Going into the elections, Jeremy Corbyn had absolutely nothing to lose as no one, even his party leaders expected Labour to retain it’s seats, instead Labour ended up gaining 30 seats. Just two months before the elections, Corbyn trailed Theresa May by 20% in the opinion polls. Nearly wiping out such a huge lead was a commendable effort. His grassroots campaigning and unlike the tories which mainly focused on Brexit, his focus on taxes, college fees, canny social media strategy,more funds for National Health Services seemed to have worked in his favour. The stream of Labour MPs confessing to their own faulty polling predictions provided extra balm to Camp Corbyn.

“I was clearly wrong in feeling that Jeremy was unable to do this well and I think he’s proved me wrong and lots of people wrong and I take my hat off to him.”

However questions remain over his ability to lead the country but there’s no question that the tories underestimated Labour. All the leading polls showed an absolute rout of the Labour which made the tories go overboard and campaign in constituencies which have voted for Labour since long without securing their own constituencies first.“They underestimated us, didn’t they?” he told a rally in Glasgow.

Theresa May in her famous rant against Jeremy Corbyn said that if she lost just six seats, Mr. Corbyn would sitting with the heads of the states and negotiating Brexit.

Mrs. Theresa May lost 13 seats. There is little doubt Mrs. May’s version of hard Brexit has been rejected. A hard Brexit means a complete break from the EU whereas a soft Brexit means more negotiation and remaining in the single market. Mrs. Theresa May thought the campaign would revolve around Brexit and marketed herself as the best positioned leader to lead the country through Brexit. But the Labour party instead shifted the nation’s focus on austerity and economy.

Britain’s economy is the slowest of all the G7 nations in this quarter. The multiple terrorist attacks too, didn’t help her cause and raised question marks over her authority. The fact that she oversaw police cuts during her time as Interior Minister , only weakened her cause. Despite her attempts to keep the campaign about Brexit, her main reason for calling snap elections, as the campaign progressed surprisingly Brexit was completely forgotten, a scenario which Mrs. May had never envisaged.

Despite all the optimism in the Labour camp, they need to be served a reality check that they are far away from forming the government in the near future. The Conservatives remain the single largest party as UK moves to a distinctly two party system. This is a precarious situation for both the UK and the EU, with the first round of Brexit talks just one week away it is almost certain the talks will have to be delayed.

After Macron’s win in France, the EU appears to be much stronger and is said to be ready for negotiations anytime Britain wants. The threats have already started coming from the EU, with it’s council head tweeting that he doesn’t know when the talks will start but knows when the talks will end i.e. March 2019. If the talks don’t end by that time, there will be no deal for Britain.

The results are such that every major party has lost in the elections. The Conservatives lost their majority, the Labour despite the gains don’t have the numbers to form the government, Scottish National Party saw it’s numbers dwindle from 56 to 35 in the Parliament, UKIP failed to secure a single seat and the Lib Dems didn’t make an impact. Perhaps, Mrs. Theresa May didn’t take into account a scenario in which her party would lose majority just days before the Brexit negotiations begin, in what can be termed as a monumental miscalculation in calling snap elections.

With the Conservatives forced to ally with Democratic Union Party of Northern Ireland to remain in power, an extremely conservative party which opposes same sex marriage and abortion but also doesn’t agree with Mrs. May’s version of Brexit. DUP wants to remain in the single market but Theresa May doesn’t. Entering an alliance with the DUP also undermines the Good Friday agreement which finally brought an end to the widespread violence in the Irish country.

Brexit has divided the United Kingdom ever since the referendum. Various versions of Brexit have been presented but perhaps no party has prepared it’s citizens for the initial doom that would follow Brexit. Most of the citizens are unaware of how big an impact Brexit will have on the economy. There have been talks of another referendum on Brexit and more importantly another general election to end the impasse that the results have produced.

There’s little doubt that Mrs. Theresa May has scored the biggest self goal of the decade and with her MPs turning against her, if Mrs. May has any conscience she must resign. She was an accidental Prime Minister who was in the Bremain camp and must step aside for those who championed Brexit to lead the country in these tumultuous times.