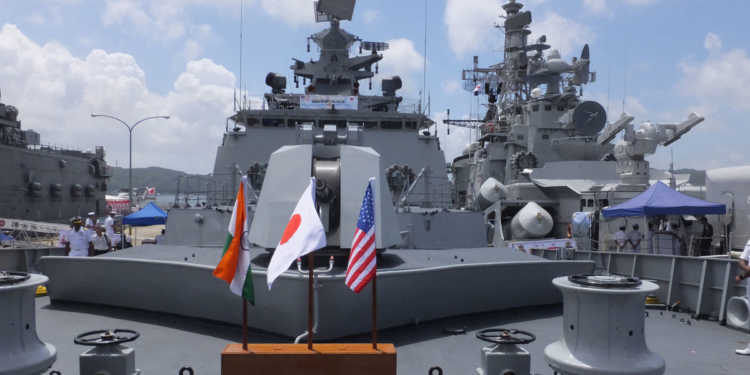 Well, it seems that India has now decided to shed its cloak of a diplomatically soft power. From the time they decided to give the Indian armed forces a free hand in clamping down on the traders of terror, whether in Kashmir Valley or in the Maoist infested states of Chattisgarh, Odisha, and Jharkhand etc.

Keeping up with regaining its martial instincts, India has decided to join United States of America in another historic maritime exercise at the Bay of Bengal in July 2017.

This will be a unique maritime exercise to be precise, not only because this is the first ever such exercise since Donald Trump, the famous real estate tycoon took over the reins as the 46th President United States of America, but also because for the first time, India will hold a combined maritime exercise with both USA and Japan, who are sending their Self Defense Maritime Force for this naval drill, known as Malabar Trilateral Exercise, which is touted to be much bigger and more complex than ever.

In the words of an Indian Navy officer, who is supervising the operations, he said on the condition of anonymity, “The exact composition of the participating units will be known after the final planning conference is over. But the drills will be more complex than any previous engagement,” he added.

Initiated in 1992, the Malabar exercise, with India and USA only participating in it. Japan arrived much later on the scene, in 2007. It was only last year, when Japan was accepted as a regular member in this exercise. This exercise will conduct primarily anti submarine drills, a crucial warfare method when on the seas.

According to the Indian Navy sources, this exercise will have the following naval artillery on display and in action:-

As per a press conference held by the same Indian Navy officer mentioned, as reported to the Press Trust of India, “………A planning conferences will be held in USA to determine the dates and the warships participating in the exercise. Then a final planning conference will be held in India, to determine the scenarios to be simulated for boosting the abilities of the participating navies in the subsequent joint operations………..”

Fun fact, someone is quite apprehensive of this exercise even before it has started. That is our own fickle minded neighbour and the ever faithful ally of Pakistan, China. At a time, when China is expanding its power over the Indian Ocean, participation of its archenemies in a huge naval exercise is bound to piss them off. China even lodged protests against the Japanese participation.

Is it because Japan is participating, that China is participating, or is it because China fears the subsequent rise of the Indian Navy as a potential naval power, capable of pulling the Chinese arrogance down to the sea floors? Only time would tell that. But given how our Navy has pummeled the so called Pakistani Navy back in those times, when they were actually a force to reckon with, I doubt on a personal note, if China will even come close to even challenging us in an area, where we can actually beat them back brutally.

Our Indian Navy is not made of sugar and salt, and the Chinese should keep this in mind. Besides, it deserves a payback in its own style, without raising a hand, for betraying us at the UN, and indirectly supporting Islamic terrorism by refusing to allow the declaration of Maulana Masood Azhar as a dreaded terrorist by the UN Security Council.

This naval exercise is touted to be quite revolutionary, especially when the threat of Islamic imperialism is now looming large over the world. In such a time, when half of Europe has already accepted their defeat to the overhyped Islamic terrorists, and other powers are hesitating to take strict actions, it is imperative that such nations who have never bowed down to the menace of Islamism join hands together. Given how India, USA & Japan, apart from the trump card of this game, Israel, have been reacting to this problem, it shouldn’t be an uphill task either.

All eyes will now be glued to July 17, when this historic maritime exercise shall be executed on the waters of Bay of Bengal, the same place where the Pakistani pride of 1971, PNS Ghazi, was sunk mysteriously.

This incident marks the beginning of the end of Islamic State