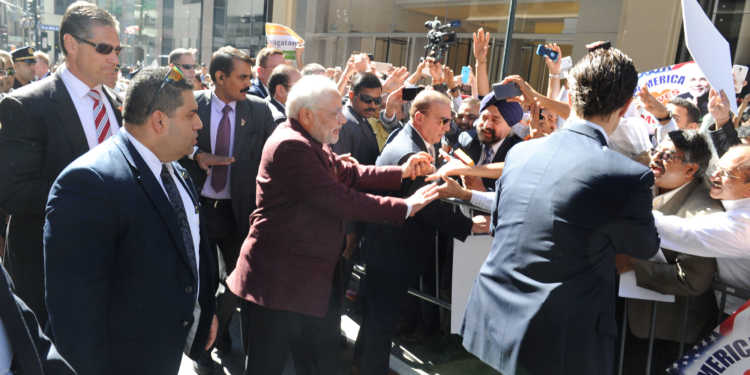 The Prime Minister, Shri Narendra Modi being greeted by the people, in New York, on September 26, 2014.

It is no secret when it comes to PM Shri Narendra Modi’s love towards Non-Resident Indians Dashboard(will be addressed as NRIs from now on) and I don’t think anybody would dispute on that front though there are set of people who oppose whatever Modi did. Have you ever wondered, ‘why does the PM of World’s second most populous country try to woo limited elite NRIs though their contribution to the elections is miniscule?’ When the number of votes that NRIs contribute is very small, it can’t be just the political equation, isn’t it? Let me take you through the possible reasons.

NRIs are traditionally the ambassadors of Brand India, they represent India, outside of India. Rest of world perceives what India is through them. Couple of decades back, NRIs used to take advantage of host nation for earning sufficient money so that they can come back and settle down in India. However, in the last two decades NRIs have started settling down in their respective nations which helped them build local political connections. They have lobbied for investments in India, they also have, in a way, helped Indian companies to expand to other markets. The role of NRIs was immense in concluding the Nuclear deal with United States of America. They acted as catalysts for ‘Indian’ brand building. Now, NRIs have come to a stage where they are too powerful to ignore.

India receives highest amount of dollar equivalent remittances than any other country in the world, including China, from their Non-residents. NRI remittances have become integral part of policy decisions and foreign reserves maintenance. To put that into perspective, NRIs have remitted about $69 billion in 2015, which is higher than the entire Forex reserves of Denmark. In 1991, India had to pledge its gold to get dollars to avoid bankruptcy. NRI remittances stand at 4% of our GDP which is higher than any major economy. The total earnings of NRIs is estimated at $250 billion which is 1/8th of Indian Nominal GDP Value. The first Prime Minister to acknowledge the importance of NRIs was Mr. Vajpayee, he played a crucial role and introduced various schemes and procedures for the dollar remittances.

Currently India has the highest number of non-residents (immigrants) than any other country in the world, which stands at 15.6 million people. And, remember, people who were born on foreign soil to Indian parents aren’t being considered here. Most importantly, unlike immigrants of few other countries, NRIs tied back to home by culture and by blood-link. They continue to visit India and preserve the Umblical cord that runs across the proverbial 7 seas.

India is poised to grow at brisk pace and will eventually win back ‘The fastest growing major economy’ tag due to various business friendly policy initiatives. India is the next big thing that is going to happen to the world and NRIs could be the ones to lead next wave of growth. They have the intellect, experience and capital to catalyze the growth. Just imagine, what if all the bright minds that left India in the last few decades start coming back to India with pockets full of money? That would be the potential game changer. Any sensible leader, like Modi, doesn’t want to miss that kind of opportunity.

One of the major reasons for not-so-many disruptive innovations in Asia (India in particular) is due to the lack of potential domestic market and infrastructure. People who left India to pursue better career opportunities know exactly what is that India missing. NRIs can help us in that regard to build a better nation to have a next silicon valley in India (nothing is too ambitious for a country like India, India will be the country to host next Silicon Valley). Currently, Indian domestic consumption is growing at a rapid pace and we have sufficiently large domestic market to make customized services/products to meet the domestic needs, that is exactly where is foreign capital and expertise will be of great assistance. Not surprisingly, NRIs have the both.

It is not just the money they possess or the dollars they remit back to India that matters the most, it is the knowledge they possess and potential of that knowledge/technology transfer to motherland. Gandhi, Netaji, Nehru, Patel were all once NRIs who dreamt of better India. Tourism is another area where NRIs are helping India in direct/indirect way by inviting their colleagues/ acquaintances/ friends to India for various occasions and introducing our culture to them. In a way, the success of ISKON in western countries should largely be attributed to the NRIs. They are playing a very important role in spreading our culture and values to the world, be it Yoga or Meditation.

NRIs are the representatives of India in overseas, foreigners experience India through them. People form their opinion about any country based on their first-hand experience of that country, and there is no better way than interacting with NRIs for that. In a way, NRIs are acting as the brand ambassadors of India to the world.

So, if you ask me, why Modi is trying to woo NRIs, my answer would be, ‘why not?’ Any leader with vision would do that, and Modi is certainly one amongst them.

Though NRIs represent less than 1% of Indian population, their contribution to the nation is immense and they will continue to be the powerhouses to build better India. With the strong political connections of host nation, they will continue to shape our foreign policy. Modi is smart in wooing NRI s, any prime minister should.

China kept provoking, Thinking It Was Just Another Indian Government. But What Modi has been doing is Epic