China’s Day of Reckoning has come, It has been Sentenced to be divided into 7 Small Pieces 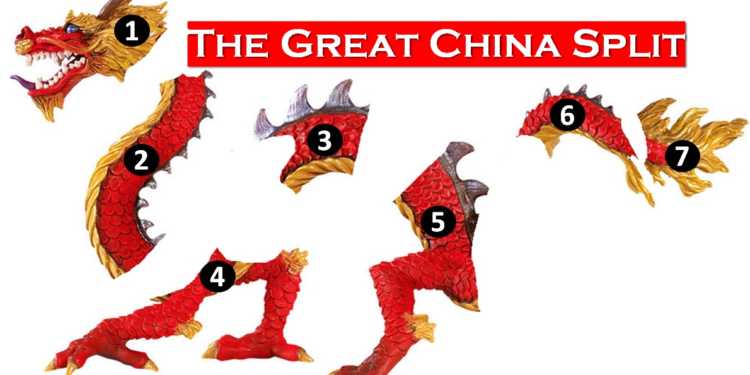 Every year thousands of delegates all over from China go to Beijing to attend the National People’s Congress which is an annual ritual of the Chinese communist party. Over 3,000 delegates ranging from rural workers to urbane billionaires gather for a week in Beijing to discuss the critical issues of nation. In Chinese political system democracy is absent and no opposition to challenge the hegemony of Communist party. Many political commentators who are aligned to left ideology project this gathering as a sign of the strength of the Chinese political system. China is not the only country that has one party system there have been others in the past who have succumbed to Communism. Chinese politics is a theatre with staged events like National People’s congress. These events are intended to project the power of Chinese Communist Party (CCP).

The delegates are nothing more than actors and the script of the event is prewritten. All the actors have to do is learn their dialogues and play their roles. Any deviation would invite the wrath of Communist party senior officials. But these days everything is not alright in the party, cracks are wide open. The unity within the Chinese Communist Party is shattering as all the three factions (Shanghai, Beijing and Zhenjiang) in the party are embroiled in a feud.

The Shanghai faction is led by Jiang Zemin, Beijing faction is led by Hu Jintao and Zhenjiang faction is led by President Xi Jinping himself. Each one of the three is trying to nullify the influence of the other faction. Since 2012, when Xi Jinping took office political oppression has intensified and it has blanketed China. Press, social media, film, arts, literature and the Internet in China is heavily censored. Many intellectuals, Tibetans, Uighurs, lawyers, university students have been persecuted for voicing their opinions in favor of democracy.

In 2013 the Central Committee sent a draconian order known as Document No. 9 down the hierarchy. It authorizes authorities to carry out any search without warrant even if there is suspicion of endorsement of the West’s “universal values” by some individual. Words like constitutional democracy, civil society and free press are alien to Chinese citizens as the state overpowers them all. All this gives a sense that the communist party leadership’s is suffering from deep anxiety and insecurity of loosening grip over China.

The corruption that riddles the party-state and the military also pervades Chinese society as a whole. Xi Jinping’s anti-corruption campaign is more sustained and severe than any previous one, but no campaign can eliminate the problem. It is rooted in the single-party system, patron-client networks, an economy utterly lacking in transparency, a state-controlled media and the absence of the rule of law. China’s leader, Xi Jinping, is hoping that a crackdown on dissents and corruption will strengthen the party’s rule. Many of its targets till this day have been political clients and allies of former Chinese leader Jiang Zemin. Mr. Jiang who is the kingpin of Shanghai faction is the godfather figure of Chinese politics. Going after Jiang’s network is detrimental for Xi’s politics as the latter lacks loyal followers which are instrumental in any power structure. Chinese economy is still in trouble. Even though reforms have been announced but state-owned enterprises and local cadres block them for their vested interests.

With all this in backdrop a debate in low voice about the future of China is taking place. Many activists in Honk Kong believe that disintegration of China is near. There are mainly two reasons, firstly, corrupt bureaucracy and faction infighting. Secondly, Chinese are more oppressed than ever. In 2010-2011 the Chinese government faced over 1.5 lakh pro-democracy protests and riots. China is closed state very less information gets funnel out. In July 2017, 103 protests were reported from Chengdu, capital of Sichuan Province and 137 protests in Xinjiang which is dominated by Muslims.

After the death of Nobel laureate Liu Xiaobo and his sea burial mass protests erupted in Hong Kong. The clampdown on religious freedom in Xinjiang (banning Muslims from fasting during Ramzan) increased tension between the Uighurs and the Chinese government. In June 2012, six Uighur extremists reportedly tried to hijack a plane from Hotan to Urumqi but their attempt was foiled by passengers and crew. Series of attacks by the extremists have led to mass arrests. Until 1997, Hong Kong was a colony of the United Kingdom but as per the deal between Chinese and the British, it was handed over to the Chinese. There was a clause that Hong Kong would retain its own currency (the Hong Kong dollar), legal system, and parliamentary system for fifty years. It’s because of this Hong Kong appears to be independent from China. But don’t get fooled the Chief Executive who runs the city is elected by the Beijing and is a Chinese puppet.

In the past protests in Hong Kong have been held to force Beijing to allow the city more democratic voting rights. This has created tension between Hong Kong citizens and Chinese government. Hong Kong does not want any Chinese intervention. In May, Shanghai witnessed three huge street protests by labor unions demanding labor reforms. Tibetans too have suffered atrocities at the hands of Chinese ever since China occupied Tibet in 1959. Up to 6,000 monasteries and shrines have been destroyed and monks are allowed to practice under strict government supervision.

With the Chinese policy of resettlement of Chinese to Tibet the Tibetans are now a minority in their own country. Peaceful demonstrations by monks and Tibetans have resulted in thousands of arrests. The Dalai Lama under self-imposed exile lives in India. The situation in Tibet is really grim and can explode anytime. The last known mass pro-democracy protests in Beijing took place in 1989 which ended in bloody massacre. The communist party declared a martial law and around 300,000 troops were mobilized to curb the protests. When the soldiers were stopped from going towards Tiananmen Square they opened fire at the protesters. The death toll is estimated to be in thousands. It’s the potion of fear from which the Chinese state gains power.

It’s hard to predict the collapse of Communist China, but one can easily conclude that its days are outnumbered. The CCP may be the world’s second longest ruling communist regime but no party can rule forever. Already large numbers of citizens and party members alike are leaving the country. Those staying in China are displaying their insincerity by pretending to comply with party orders. The end will come when Communist party’s propaganda machinery becomes weak and its agents themselves identify with dissidents. With the signs of dissent and apathy towards the Chinese communist party all over China, the end of tyranny is near.

What? US military isn’t in any position right now to strike North Korea