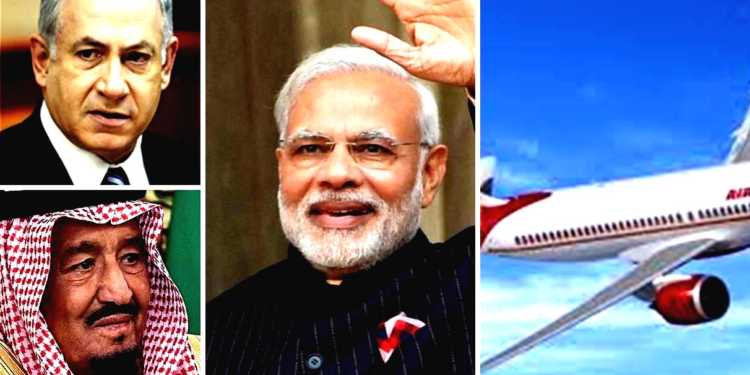 It’s like the surprise nobody expected- Saudi Arabia opening up its skies for an air carrier en route to Israel! And the winning airline is none other than our humble Maharaja Air India, which on Thursday launched the first scheduled service to Tel Aviv crossing the Saudi airspace, an indicator of not just improved relations between the two erstwhile arch-enemies but a victory of behind the scenes diplomatic efforts being made by the Modi government.

Israeli Transport Minister Yisrael Katz termed it a “historic moment” and said it is for the first time that there is an official connection between the state of Israel and Saudi Arabia. There will now be three flights weekly in each direction, ending the decades-long Saudi ban on the use of its airspace for commercial flights to the Jewish State, and unveiling a new era of thawed ties in the Middle East region.

The airline had planned to launch the service in May 2017, but faced several roadblocks after some countries denied the use of airspace for its flights to Israel. Many Arab nations do not recognise Israel, and therefore, do not permit airlines from using their airspace to reach the Jewish nation.

Prime Minister Narendra Modi, who had tried cultivating close ties with Israel even when he was the chief minister of Gujarat, became the first sitting Indian Premier to visit the Jewish state in July last year and signed some crucial agreements benefiting both countries.

In January this year, Israeli Prime Minister Benjamin Netanyahu arrived in India on a fruitful six-day trip. The visit happened even after New Delhi voted against Israel at the United Nations resolution on the status of Jerusalem. India and Israel signed nine agreements across several sectors to boost bilateral trade and cooperation during this trip. “This is a visit that will be long-remembered. It contributed, and will continue to contribute to Israel in the economic, security, technology and diplomatic spheres,” Mr Netanyahu had said, emphasising how the bilateral ties between both the nations were going from strength to strength.

Earlier in 2016, Prime Minister Modi was conferred Saudi Arabia’s highest civilian honour — the King Abdulaziz Sash during one of his official trips. The PM was presented the award, named after Abdulaziz Al Saud- the founder of the modern Saudi state, by King Salman bin Abdulaziz at the Royal Court. This year in February, Modi made an unprecedented visit to Ramallah and even backed the formation of an independent Palestinian state.

The thawing of ties between Israel and Saudi Arabia is widely being seen as a byproduct of the diplomatic influence and command prime minister Modi wields in the Middle East. He has been on a sustained mission to improve India’s relationship with this crucial region without upsetting any of the countries.

Air India had on March 7th announced tri-weekly flights to Tel Aviv from March 22nd, after Israeli prime minister Benjamin Netanyahu had announced that Saudi Arabia had allowed India to fly over its territory.

Air India flight flew over Oman, Saudi Arabia and Jordan to reach Israel, taking seven hours to reach the destination, making it the fastest air route between the two countries. It deployed a 256-seater Boeing 787 Dreamliner aircraft on the new route. The duration of the flight between New Delhi and Tel Aviv is around two hours shorter than the time taken by Israel’s national carrier El Al, which has direct flights between Tel Aviv and Mumbai. The new flight will also reduce fuel costs, which means cheaper tickets and a boost to tourism.

What is Congress’s deal with Cambridge Analytica?