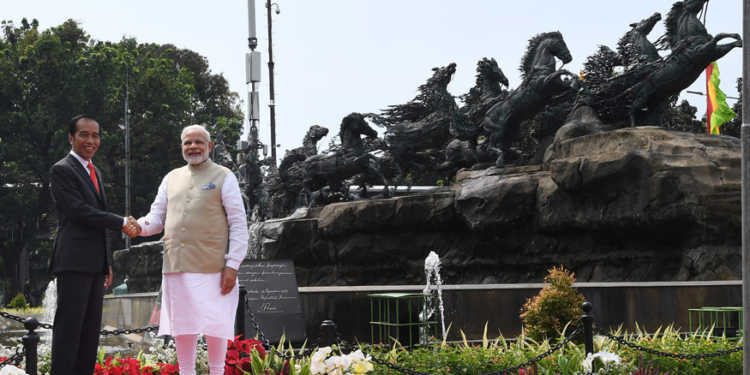 India seems to be forming cordial and warm relations with yet another country as there were signs of openness and warmth between PM Modi and the Indonesian president. Soon, the two of them were seen flying kites in the first ever joint kite exhibition between the two countries based on the Indian epics of Mahabharata and Ramayana which can be taken as a manifestation of cultural closeness between the countries. Prime Minister Modi’s visit to the Arjuna Wijaya Chariot statue accompanied by Widodo can also be taken as an attempt by both the countries to invoke cultural and historical closeness in order to lift the present relations. The two sides signed 15 agreements including one on defence cooperation. PM Modi is on his first ever official visit to Indonesia, yet the two leaders who enjoy considerable support within their own countries seemed to be sharing a very good rapport. Apart from official protocols, there was an air of comfort between the two leaders likely to lift ties between the two countries.

The ease and comfort with which the two leaders interacted with each other on their first official meeting can be attributed to similar traits that the two leaders share. The way both of them have risen to the top post in their respective countries from a very humble background reveal stark similarities between the two leaders that must have helped them get along really well with each other.

While PM Modi used to sell tea in order to make living, Widodo is a carpenter’s son who has now gone up the ranks owing to his hard work and the power of the citizenry in a democracy. Another stark similarity between them is how they brought down powerful dynasties in their respective countries in 2014. While PM Modi ensured that the Gandhi family no longer enjoyed monopoly on political power in India, Joko Widodo defeated Prabowo who enjoys strong ties with Indonesia’s powerful dynastic families. His father had served as a minster under former ruler Sukarno, and he had himself married dictator Suharto’s daughter. Therefore, both the leaders are accredited with launching assaults on, and toppling powerful political dynasties in their respective countries.

Coming to the political background and styles of both the leaders, both of them happen to be strong and charismatic, enjoying widespread public support due to brilliant administrative track records. While PM Modi’s Gujarat model is accepted across the length and breadth of the country as the best development model, Widodo’s stints as the Mayor of Surakarta followed by his tenure as the governor of Jakarta impressed the general public in Indonesia leading to his candidature and eventual victory in 2014.

Moreover, both the leaders were seen as outsiders by the political and traditional elites in both the countries. In the case of PM Modi, the entire Lutyens’ cabal looks towards Modi as an intruder who snatched political power from them. Political outfits, mainstream media outlets and the “intellectuals” in the Lutyens’ sphere love to hate PM Modi for this very reason. Widodo also shares a similar outrage among the political elites within his country. He is the first Indonesian president who comes from outside the political elite or the military establishment. Therefore, the two leaders stand for and represent the masses and the poor as compared to a few elites. Lastly, both of them routinely face a lot of undeserved criticism and outrage on the part of the political elites who had been defeated badly in 2014. Coincidentally, both of them have to face the public again in 2019 in a contest with the dynastic powers in both the nations. While PM Modi will fight it out with Rahul Gandhi who had been defeated badly in 2014, Widodo will take on Prabowo whom he had defeated in 2014.

Diplomatic relations are driven predominantly by the rapport shared between two leaders. Where both of them are on the same page and get along comfortably, it greatly helps in fostering strong bilateral relations. The relationship that the Indian Prime Minister and Indonesian President seem to be sharing will definitely take bilateral relations between the two countries to the next level.