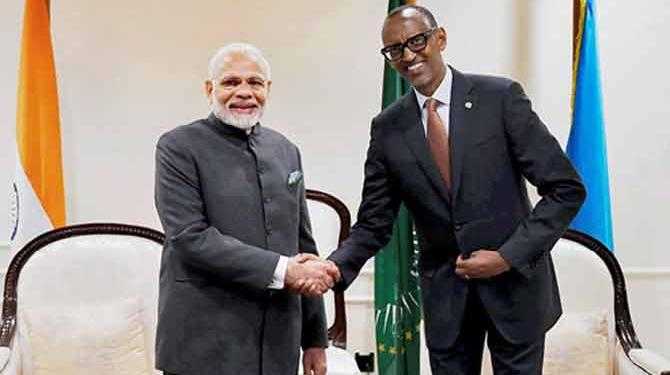 In the days to come, Africa is going to be the most pivotal continent. It will play a crucial role in shaping the face of world economy and geopolitics. The continent is full of natural resources and raw materials. Africa is a very important destination for countries like China and India who wants to become the next superpower. China already has a huge presence in Africa, it is building and contributing a lot in the developing infrastructure in Africa. Its engineers are constructing hospitals, buildings, ports, roads, railways, and airports for the African nations. China is investing almost in every sector in Africa.

Compared to India, China has a lot more funds and resources on its table to invest. In terms of outreach, China is way ahead of India. Another reality is that China is an economic colonizer. China is exploiting the natural resources of Africa for its own benefits. Now, African Nations have also understood this and that is why they are looking for other investors and trading partners who will value their nation and its resources.

Since, India does not have lot of funds to invest in Africa, hence, India adopted a different approach. While, Chinese focused on infrastructure, Indians focused more on skill development and connecting with the people. “All the hospitals in the country are built by the Chinese but all the doctors and nurses are trained by the Indians”, stated by an African leader.

India also hosted the India-Africa forum summit in 2015. It was the largest gathering of African countries on Indian soil. Representatives of all the 54 African nations were present in the summit. The summit was a massive success. India and Africa promised participation and greater cooperation in the area of sustainable development, blue economy, agricultural growth, energy access, skill development, education, healthcare, economy etc.

Since PM Modi came to power, he has made several visits to different African nations. At present he is in South Africa to attend the BRICS summit. Prior to this he also visited two African nations, Rwanda and Uganda. He arrived in Rwanda on Monday. Rwandan President Paul Kagame is the chairperson of the African Union for 2018. In an effort to bolster bilateral cooperation, India and Rwanda signed eight agreements. PM Modi also gifted 200 hundred cows to villagers under the Rwandan Government’s Girinka Programme. He also visited Kigali Genocide memorial center in Rwanda’s capital. PM Modi also extended 200 million credit lines to Rwanda.

According to Uganda’s Daily monitor newspaper report, PM Modi also announced credit lines to 40 African countries. He said, “We want to implement 118 lines of credit worth US$11 billion in over 40 African countries. Over 8,000 African youth are trained in India. Our efforts will be driven by your priorities. We fought against colonialism together, we shall fight for prosperity together.”