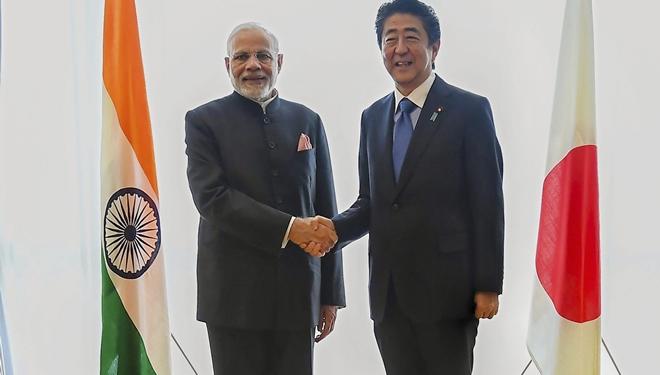 In his visit to Japan, PM Modi seems to have ensured closer and warmer ties between India and Japan. Japan looks towards India as a crucial strategic partner and this can be seen as yet another success as far as the foreign policy of Modi government is concerned.

In a warm gesture, Japanese PM Abe hosted a private dinner for the Indian PM at his holiday home in the Yamanashi prefecture. This reception is first of a kind to be extended to a foreign leader, given the fact that Japanese are very conservative when it comes to offer such gestures.  The reception is significant for the fact that India’s grandeur has increased under PM Modi and this goes on to show how highly Japan values India. And it is also an indicator of the rapport both the leaders share. Modi and Abe also visited a factory of industrial robot manufacturer in Yamanashi Prefecture, west of Tokyo.

The Japanese PM appeared quite vocal as far as his commitment towards strengthening partnership with India is concerned. He went on to state that he will be a “friend of India for life” as he and PM Modi began two days of summit talks to further deepen the Japan-India strategic ties.

PM Abe recalled the history of friendship and co-operation that both the countries share and said, “Engraving the history in my heart, I have devoted myself to nurturing this friendship with India.” He also stated that he was honoured with the opportunity to deliver a speech in the Indian Parliament, the world’s largest democracy, in his visit in the year 2007. Apart from this, Abe also recalled the “overwhelmingly warm welcome” by the people of India that he received when he visited Ahmedabad in September last year. Abe furthered his commitment to support the ‘Make in India’ campaign and said, “We share a big win-win potential in all areas and Japan remains committed to supporting India’s economic growth and Prime Minister Modi’s ‘Make in India’ initiative through high-speed rail, subways and other infrastructure, mobilising Japan’s world-leading technologies.”

PM Modi also reciprocated to the warmth shown by his Japanese counterpart and said that his meeting with Abe will add new vigour to the strong friendship between the two countries. Before leaving from Japan PM Modi said that India’s ties with Japan, both economic and strategic, stood completely transformed in the recent years. He touted Japan as ‘one of the most trusted partners’ in India’s economic and technological modernisation.

This visit was, indeed, a huge success for the Modi government. Friendship between PM Modi and Japanese PM Abe, consolidated by over 12 meetings in the past was on display when both the leaders signed five pacts across different sectors. Above all, this visit seeks to take the bilateral relationships to a new height. The special gestures by Shinzo Abe towards PM Modi and his strong and encouraging words for Indo-Japanese relations reinforce the friendly relations, both the countries share. PM Modi has shown the art of maintaining and improving ties with India’s allies with amazing ease. The art of bolstering relationship was at display again.