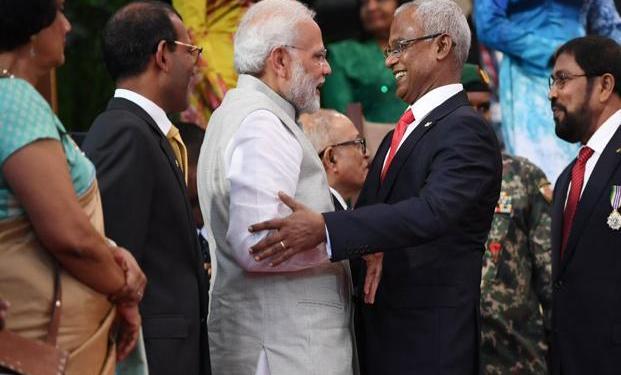 Former president of Maldives and advisor to newly elected President Solih, Mohamed Nasheed, has made it clear that the new Maldivian government will not go forward with the Free Trade Agreement with China. The statement came from a senior lawmaker and was later tacitly supported by Nasheed. He had been vocal against the free trade deal since the signing of the deal back in 2017, by the Yameen government. The 1000 page document was presented before the parliament only an hour before being ratified, sending shockwaves up to New Delhi where the news was received with great unease.

“The trade imbalance between China and the Maldives is so huge that nobody would think of an FTA between such parties”, said Nasheed. He also called it a “one sided treaty”. Indeed, Chinese exports to Maldives account for more than 99% of the total trade between the two countries. This giant trade deficit is already too much to sustain for the island nation. Chinese debt has increased due to inconsiderate infrastructural projects cleared by the country’s previous pro-China government. Also, the passage of a liberalised land acquisition law in 2015 which allowed foreigners to own land in perpetuity, if they invested more than $1 Billion and reclaimed 70% of it from the sea, made easy way for dozens of Chinese and other foreign companies to benefit. The geopolitically crucial nation, with a population of only a little over 400,000, owes an equivalent of 25 per cent of its GDP to a superpower, China. It is being eyed for its strategic location along the major sea lanes of communication and particularly for gradual control over its islands to fulfill China’s ultimate goal to checkmate all powers in the Indian Ocean Region as per the “string of pearls” strategy. An FTA with such an intimidating superpower was irrational and could never have been anything but terribly hazardous to the tiny nation’s sovereignty.

Despite this, the powers of the new government were perceived with skepticism given the Maldives’ deep involvement with China over the past few years. But the new developments are heartening, especially for India. In an interview to Reuters, Nasheed stated that, “It (the FTA) was ratified by the parliament but fortunately it calls for different sets of legislation. We are not going to have this legislation. We can’t go with that.”

Nasheed, the first democratically elected president of the Maldives was evicted in a coup, in 2012, after four years in office. During a crackdown on opposition leaders by Yameen, in 2015, he received a prison sentence of thirteen years on controversial “terror” charges. In 2016, he went into exile after being permitted to leave the country for medical treatment.

He had declared his decision to pull his presidential candidature from the September 23 election after he found out that he was disqualified. He was replaced by Ibrahim Mohamed Solih as the presidential candidate of the Maldivian Democratic Party. After Solih’s surprise victory over strongman Abdullah Yameen in the September 23 elections, the Supreme Court dropped Nasheed’s arrest warrant, and he has since returned to the country and will be an advisor to President Solih.

The presidential swearing-in ceremony of Ibrahim Solih was attended by the Prime Minister Narendra Modi, who was the only foreign leader present there. This was his first ever visit to the SAARC nation after cancelling his visit in 2015, owing to discomfort with Yameen’s autocratic rule and pro-China stance. He was warmly welcomed and assured the new government all required assistance to achieve sustainable, social and economic development. The entire event could be termed a symbol of prevailing democracy and a colossal diplomatic victory for India in the Indian Ocean Region. The subsequent scrapping of the FTA with China by Solih is yet another clear confirmation that the administration is leaning towards India.