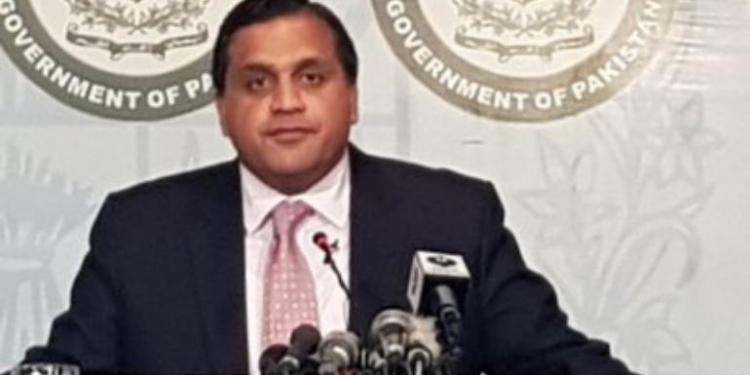 Keeping aside all the journalistic ethics and objectivity, ARY News, a Pakistan based media house, spread fake news claiming that the Twitter account of Mohammad Faisal, a spokesperson of Pakistan’s foreign Ministry was banned after alleged complaint by Indian authorities.

However, after investigation the fake news was busted and it became clear that it was his personal account that was blocked and not the official one. The Pakistan Foreign Ministry’s official account, which bears Mohammad Faisal’s name, still remains active.

A report in the Express Tribune stated that Mohammad Faisal’s account was suspended for “keeping his social media followers updated” about “Indian atrocities” in Jammu and Kashmir and the hearing of the ‘Kulbhushan Jadhav’ case at the International Court of Justice.

Moreover, in a recent post on his Official Twitter page, Mohammad Faisal spitted venom stating, “Pakistan welcomes the OHCHR statement regarding the Pulwama Attack being used to justify violence against Kashmiris and Muslims in India”.

#Pakistan welcomes the @ohchr statement regarding the #PulwamaAttack being used to justify violence against #Kashmiris and Muslims in #India.@antonioguterres @amnesty @AIIndia #Kashmirbleeds

However, on further investigation, it became clear that Office of the United Nations High Commissioner for Human Rights (OHCHR) had made such comments in the context of human rights violation in Brazil.

“Slavery is a crime that should not go unpunished.” http://bit.ly/b8Fpnv #UN #news

In its report, OHCHR clearly mentioned that these statements were related to slavery in Brazil. Special Rapporteur on Contemporary Forms of Slavery, Gulnara Shahinian, stated that ‘Slavery is a crime that should not go unpunished; including is causes and consequences’, at the end of her visit to Brazil.

In the wake of the Pulwama terror attack, in the process of desperately trying to hide its involvement, Pakistan resorted to peddling fake news. Earlier, Rattled with India’s firm resolve to take decisive action against Pakistan, Imran Khan blustered against India in his first response after the Pulwama attacks and stated that Pakistan will retaliate in case of any military action taken against them. Further, offering for a probe in the terror attack, Pakistan PM urged India to share “actionable intelligence with Pakistan”.

However, India is not the only victim of Pakistan’s ‘terror policies’. Pakistan’s own territory, Balochistan is one of the biggest victims of terrorism. Balochistan constitutes of more than half of the state’s population but the political elites of Islamabad have denied their rights since long. Balochistan is known as “A neglected province where a majority of population lacks amenities”.  The Pakistani army, dominated by Punjabis and Pashtuns has oppressed the Balochi people since the past many decades. In the year 2018, 119 people were killed in the state including 15 police personnel in conflicts.

These incidents including Imran Khan’s statements, proceeded by the circulation of fake news simply shows Pakistan’s desperate attempts at fabricated lies. Their façade will soon wear off seeing as the entire world is condemning the terrorist state after Indian Government’s successful measures to sideline them internationally.