“Thank you, India,”, Israel declares after getting unprecedent support from India and Indians 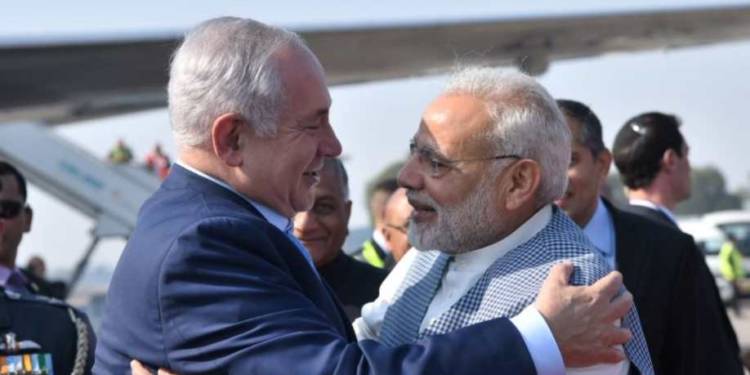 As Israel-Palestine conflict escalates once again after rocket fire from Gaza, Israel received widespread support from Indians on social media. #indiawithisrael is among the top trends on Twitter since yesterday. The Israeli government is overwhelmed by the Indian support for the cause of Israel.

The Jerusalem Post, one of the most popular newspapers of the Jewish country, published an article titled ‘After Gaza Rocket Fire, Indians Tweet #IndiaWithIsrae In Show of Support’ in which the writer noted- “In India the hashtags #IsraelUnderFire, #IsraelUnderAttack and #IndiaWithIsrael were trending on Twitter long after most of the world shifted focus.”

Maya Kadosh, Israeli diplomat and DCM at the Israeli embassy in India thanked Indian friends for the support. “You did it my friends! I’m overwhelmed by your love and support,” tweeted Kadosh.

Israel has considered India as ‘natural ally’ given the similarities in history, culture and enemies but the previous Congress governments were not very keen on reciprocating Israel’s friendly gestures. The baggage of secularism and fear of being sidelined by the Islamic world was the reason behind Congress’ half-hearted response. However, in the last five years, the Modi government has been able to improve relations with Israel as well as with the Islamic world simultaneously.

In July 2017, PM Modi essentially ‘dehyphenated’ India’s relationship with Israel-Palestine and became the first-ever Indian Prime Minister to visit Israel. The visit was a notable exception from historical ‘balancing act’ of a mandatory visit to Palestine whenever an Indian official visited Israel. “Prime Minister Modi, we have been waiting for you for a long time, almost 70 years…We view you as a kindred spirit,” said Netanyahu on Modi’s visit.

In January 2018, Benjamin Netanyahu became the second Prime Minister on an official visit to India since Ariel Sharon’s historic tour to the country in 2003.

Under the Modi government, India discarded the baggage of Nehruvian Socialism in foreign policy towards Israel. In a historic move, recently, India voted against the Palestinian human rights organization named ‘Shahed’ to deny the body observer status at UN’s Economic and Social Council (ECOSOC).

The deeper defence, security, economic, science and technology and cultural ties with Israel would be mutually beneficial. Thousands of Jew population live in various cities of the west coast of India and the Israeli population has the highest approval for India. Israel remains one of the most trusted countries among Indian populace but the previous Congress governments, being true to their elitist nature, remained biased towards Israel.

Previously, in a seminar discussion organized by The Indo-Israel Friendship Association [on ‘Leaders’ Idea of Nations in the Context of Zionism and Hindutva’], Dr Subramanian Swamy, the visionary BJP leader and member of Rajya Sabha has argued that Hinduism and Judaism should come together and fight Islamic extremism. He counted many similarities between Hinduism and Judaism including no involvement in proselytizing activities.

The interfaith relation between Hinduism and Judaism is the backbone of Indo-Israeli ties. “Jews have lived in India for over 2,000 years and have never been discriminated against. This is something unparalleled in human history,” said Rabbi Metzger. Thousands of Jews visit Himalayan states every year as tourists.

The popular support for the cause of Israel forms the backbone of Indo-Israeli ties. The people of Israel have suffered for decades due to aggression from neighbouring Muslim countries. The tiny Jewish country is surrounded by enemies and yet it stands resilient, outperforms the neighbours in terms of economy, innovation, and firepower index.