This 94 year old disaster has lost it completely 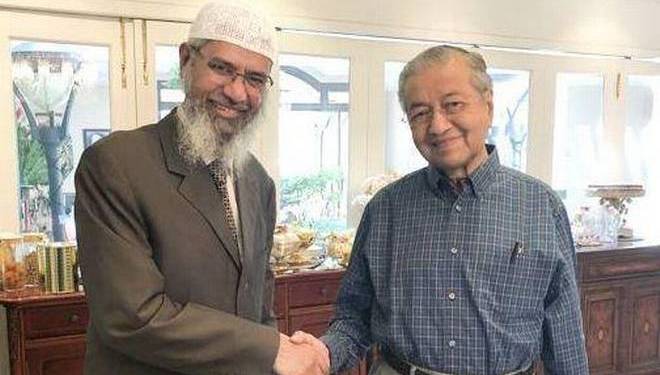 In order to save his chair, Malaysian Prime Minister- Mahathir Bin Mohamad, is appealing to Islamic hardliners. The Mahathir led Malaysian government has arrested the people who criticized the Indian Islamic extremist, who has taken refuge in Malaysia, Zakir Naik.

Two DAP party assemblymen G. Saminathan and P. Gunasekaran, were arrested under the penal code, and are being investigated for alleged links with banned Sri Lanka organization- LTTE. But, Democratic Action Party (DAP) politician, Charles Santiago questioned the arrest, and said that LTTE were “freedom fighters” and, as of now, the movement does not exist even in Sri Lanka. The MPs has been arrested on the alleged charges with a movement that does not even exist in the origin country.

This is a clear case of vendetta politics. The two assemblymen were arrested under Security Offences (Special Measures) Act 2012- SOSMA, a controversial law “to provide for special measures relating to security offences for the purpose of maintaining public order and security and for connected matters.”

“Sosma is being used to break the peace and stability in the country,” said Santiago. According to Santiago, SOSMA is being used to cow down those criticizing Malaysian Prime Minister and controversial Islamic preacher, Zakir Naik.

The members of Indian community lobbied in support of Naik’s extradition to India. But, the elected representatives of Malaysian Indian community have been arrested to create a fear psychosis among those who criticized Zakir Naik.

A few months ago, M Kulasegaran, the Human Resource Minister of Malaysia had said that Zakir Naik should be sent back to India. “It’s time for the fugitive foreigner to leave Malaysia and to face charges of terrorism and money-laundering charges in India,” said the lawmaker.

According to Kulasegaran, Zakir Naik is trying to create fissures in the multi-racial nation of Malaysia to win the favour of Muslim majority. Zakir Naik has been trying to propagate hatred against the Hindu and other non-Muslim communities in Malaysia.

The nature of Islam followed in Malaysia is not the Wahhabi/Salafi interpretation of the religion. The inclusiveness of Hinduism is still prevalent in Malaysia and therefore majority of the followers of Islam do not agree with Zakir Naik’s hardline interpretation. The Hindu-Buddhist culture of thousands of the years could not have been wiped out by monotheistic Islam which had just 600 years of history on the islands of Malaysia.

Mahathir is increasingly tilting to Islamic hardline to appeal the Muslims, who constitute more than 60 percent of country’s population. Mahathir is desperate to save his chair; his party has asked the 94 year leader to vacate the chair for Anwar Ibrahim, who is de-facto successor of Mahathir. Therefore, to sideline Anwar, Mahathir is turning to Ketuanan Melayu (favoured ethnic Malay community), which was his core ideology in 1980s.

In 2018 general election campaign, Mahathir campaigned on lines of secularism and multilateralism. He came to power on the promise of economic reforms, anti-China stance, and corruption free government. He had called the previous Prime Minister Rajak as China’s mole and termed the China backed infrastructure projects as “a new version of colonialism”.

In the last one year, Mahathir has taken many U-turns. The first step taken by him was to cancel China sponsored East Coast Rail Link. But, after a few months, his government agreed to restart the project on renegotiated price. He has also taken a benign stance on China’s claim in South China Sea. The previous term of Mahathir (1981-2003) was very hawkish but this time he looks benign.

Moreover, Corruption is still big issue in Malaysia and economic growth has not picked up. Add to it, his meddling in the Kashmir issue which has put him on India’s least preferred list. Ethnic Malaysians, though Muslims, have practiced a more tolerant version of Islam which is very different from the version of the religion practiced in the western part of the Asia. Even his own daughter had castigated him for trying to Arabize a proud Malay nation.