The reality of Pakistan 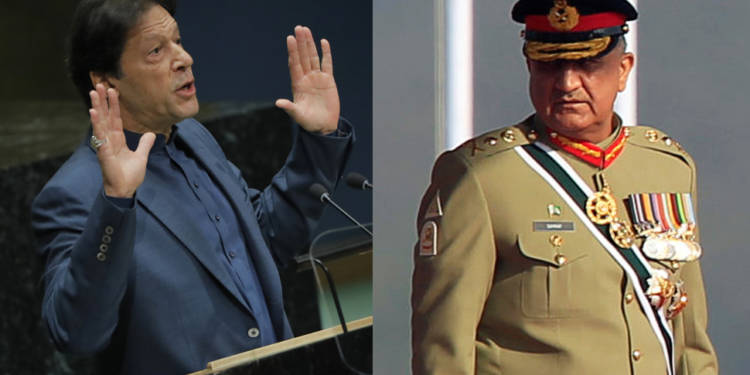 Pakistani Prime Minister Imran Khan has been going door-to-door with a begging bowl, pleading for aid and debt relief worth billions of dollars as the Wuhan coronavirus pandemic has left the country’s economic on the brink. However, the severe economic conditions hasn’t stopped the Pakistani military from seeking a 20% hike in the salaries of the military personnel as the military has sought an additional Pakistani Rs 63.69 billion to cover the salary hike.

Pakistan’s Defence Ministry has submitted a memorandum to the finance decision where they have requested for the additional Rs 63.69 billion to cover the salary hike because of various factors which have “affected the fiscal space and livelihood of armed forces personnel”.

The devaluation of the Pakistani rupee is cited as the reason for the salary hike as the military personnel have been hit by inflation and increase in utility bills. The memorandum further states that the salary of the positions up to the rank of brigadier has been increased by 5% in the current fiscal year, whereas,  soldiers and junior commissioned officers have been given an ad hoc relief of 10% of their basic pay.

It also states that the ad hoc relief actually results in a decrease in salary as it has been offset by enhanced income tax. Pakistan’s military has often been at the centre of focus as it is widely believed that it is the Army who calls the shot in the country. Billions of dollars are granted every year to the Pakistan Army by the civilian government to ensure that terror is exported to India.

Last year, the Imran Khan government announced a defence budget of Rs 1.15 trillion. This budget accounted for 16% of the Pakistan government’s total spending and about 3% of its GDP.

This salary hike comes at a time when the country is ravaged by the pandemic and is increasingly struggling to cope up with it. According to a study by the think tank of Lahore School of Economics, due to the three month lockdown from March to May, Pakistan may witness a 2.9% contraction in GDP growth in 2020.

“This will result in a loss of 1.5 million jobs by the end of the year. Out of this, 1.2 million informal jobs will be lost while 0.3 million professionals employed in the formal sector will be rendered unemployed,” said the study.

While completely turning a blind eye to the lack of preparedness to tackle the pandemic, Imran Khan has yet again sought international aid for Pakistan to fight the pandemic as he claimed that Pakistan would run out of money if the situation is not brought under control at the earliest.

Earlier in March, the World Bank and the Asian Development Bank committed to provide $588 million to Pakistan to help the country fight the Wuhan virus.

Recently, the country has sought US $3 billion loan from three multilateral creditors under the garb of the impending economic crisis due to the pandemic. Finance Adviser to Imran Khan, Abdul Hafeez Shaikh addressing a news conference said that apart from the US $1.4 billion loan the nation secured from the IMF, Pakistan will also be receive loans from the World Bank and the Asian Development Bank as they will extend loans of US $1 billion and US $1.25 billion respectively.

This comes in the backdrop of the IMF led bailout of Pakistan last year as the country secured a $6 billion bailout from the International Monetary Fund. However, Imran Khan’s true aim is to secure international aid in addition to the loans. Prime Minister Imran Khan recently urged the world to deliberate on ‘debt write-offs’ to help Pakistan cope with the pandemic.

“The world community has to think of some sort of a debt write-off for countries like us, which are very vulnerable, at least that will help us in coping with (the coronavirus),” said Imran Khan. He further warned that if the pandemic hits Pakistan, any hopes of lifting the country’s ailing economy would be permanently vanquished as exports would fall off, unemployment would soar and an onerous national debt would become an impossible burden.

The Imran Khan government when it took over the reigns of Pakistan dug the grave of an already ailing economy and the pandemic will act as the last nail in the coffin of Pakistan’s economy. During Imran Khan’s first year in power, Pakistan broke all records as it borrowed a whopping Rs 7.5 lakh crore. During the period of August 2018 to August 2019, the foreign debt incurred by the Imran Khan government stood at PKR 2,804 billion. As of June 2019, Pakistan’s total public debt stood at PKR 31.786 trillion.

What’s more concerning is the fact that the Imran Khan government has projected public debt to increase by 47 per cent to PKR 45.57 trillion in five years. At present, Pakistan has incurred an external debt of more than US$ 100 billion. The fact that almost the entire world is in some form a lockdown, will further exacerbate the condition of Pakistan’s economy.

Pakistan as a nation will completely falter if there are no debt-write offs granted to it which has prompted Imran Khan emerging as the first and the loudest voice pleading for debt relief.

Recently, Imran Khan was panned left, right and centre as he wore an attire which is unbecoming of a head of state as he in his ragged sweater pleaded to the international community to grant debt relief.

In April, the International Monetary Fund approved nearly $1.4 billion to Pakistan to meet the balance of payment crisis which is of course, in addition to the $6 billion bailout package granted to the country by IMF last year. “The outbreak of COVID-19 is having a significant impact on the Pakistani economy,” said Geoffrey Okamoto, the IMF’s First Deputy Managing Director and Acting Chair.

The economic crisis has resulted in the Imran Khan government take up severe austerity measures but the Pakistan Military seems to be unaffected as no matter what the situation, the billions of dollars should continue to flow in so as to sponsor the terror factories, even if it meant the entire nation going hungry.

Just how Pakistan will repay all these loans is something that even Imran Khan doesn’t know. However, the Pakistan Military is determined to ensure that their budget isn’t affected and hence, have appointed a former ISPR official, Lt Gen Asim Saleem Bajwa to Khan’s media management team.

The pressure of the Pakistan Military is visible as soon after the outbreak, the civilian government announced a supplementary grant of Pakistan Rs 11.48 billion for the China-Pakistan Security Force–South, Rs 90.45 million for the Nuclear Regulatory Authority and Rs 468.2 million to the Special Communication Organisation, reports The Print.

It seems that no amount of aid or loans can help Pakistan as whatever amount it receives it will immediately redirect it to the Pakistan Military so as to ensure that the terror factory faces no problems. The Pakistani citizens have been completely left to themselves in this pandemic.