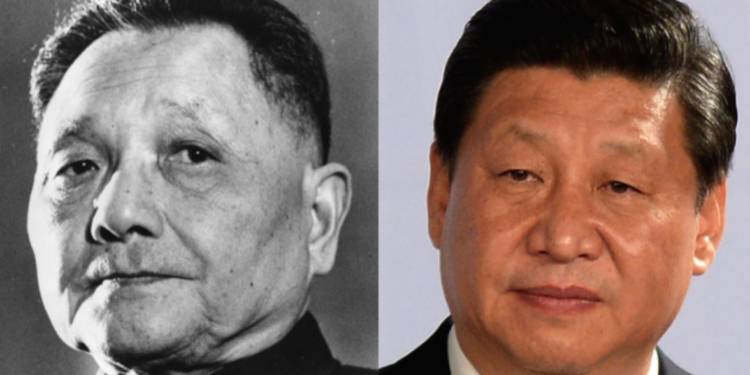 Decades ago, Deng Xiaoping, the man who transformed China from a Communist economy to a market-driven economy, famously said, “Hide your strength, bide your time.” This statement drove Chinese foreign policy for more than three decades until Xi Jinping came to power and in his rule, the world witnessed the rise of Chinese Wolf-Warrior diplomacy.

From 1978 to 2013, for almost three and a half decades, Deng Xiaoping’s ideology has driven China’s policy at home and its interaction to the world. The successors of Xiaoping were Jiang Zemin who ruled from 1992-2002 and Hu Jintao whose rule lasted 10 years from 20002-2012. These leaders did not bring any radical change in the Chinese foreign policy and operated broadly within the contours set by Deng Xiaoping.

In this era, China was never assertive despite its rising economic influence and stature. The “peaceful rise of China”, based on Xiaoping’s principle of “Hide your strength”, was much appreciated by intellectuals and political theorists across the world.

China became the second-largest economy only second to the United States in 2010 and this was when things changed in the CCP. In late 2012, Xi Jinping, a person with a radical mindset, came to power in China. In the very initial days, Jinping consolidated power, purged his dissenters, surrounded himself with loyalists and placed them in important government positions.

Here on Xi Jinping started projecting Chinese power in the global sphere. Jinping had a very clear vision from his early days in office and that is why his pet project, the Belt and Road Initiative (BRI), was a more ambitious and foreign-policy oriented project than any other previous projects taken up by the Chinese Communist Party.

Since Xi Jinping came to power, the budget for foreign ministry and defence ministry has grown in double digits every year despite the slowing economic growth. Jinping’s China is very assertive and its diplomats are no longer polite and benign. They have shifted to Wolf-Warrior diplomacy, and it all started with a movie.

Just a few years after Xi Jinping unveiled his plan to deal with the world, a film named Wolf Warrior was produced by China Film Group, state-owned production company of the country. The slogan of the film, taken from a Han dynasty-saying, was- “Whoever offends China will be punished, no matter how far they are.”

The Rambo style film projected China as a superpower whose agents will carry out operations in foreign countries to defend Chinese interests, just like the United States does. In the end, the film had a message, displayed on the Red Chinese passport, which read– “Citizens of the PRC: When you encounter danger in a foreign land, do not give up! Please remember, at your back stands a strong motherland.”

The film became a superhit in China and earned billions of dollars. The sequel, Wolf Warrior 2, released in 2017, has an even more nationalistic fervour, and is still the highest-grossing movie of all time in China, with earnings of 5.67 billion dollars.

The movie changed the perception of Chinese nationals about their government. China, in their eyes, was rising from a benign country to a global superpower. The rising nationalist sentiment is necessary to maintain the unquestioned authority of the Chinese Communist Party amid the economic slowdown. The Communist government doubled down the efforts to promote nationalist sentiments and before anyone knew it, Chinese diplomats had become more assertive across the world.

The change in the Chinese diplomatic philosophy in the last few years, from a benign approach to an assertive one, has been termed as ‘Wolf Warrior Diplomacy’ by English language media and foreign political commentators.

However, the Chinese government has maintained that they have not switched to ‘Wolf Warrior’ diplomacy. Recently, in an editorial, the Global Times wrote, “Labeling Chinese diplomacy as “wolf warrior” reflects an extreme ideology. If Western public opinion uses the label to describe Chinese diplomacy, then it is vulgarizing its international political thinking and playing to the crowd.” China’s foreign minister Wang Yi also negated the argument that Chinese state has changed its diplomatic approach.

But, from the statements of Chinese diplomats in countries like Germany, France, and Australia, who threatened these countries about possible repercussions of taking on China, it became evident that the Chinese government no longer wants a “peaceful rise” and is ready to take on anyone who does not dance to its tunes.

Zhao Lijian, who was promoted from the position of a diplomat in Pakistan to the spokesperson of Chinese foreign ministry after a Twitter spat with US National Security Advisor Susan Rice, has become the face of China’s ‘Wolf Warrior’ diplomacy.

Zhao is among the few Chinese politicians active on Twitter. He peddled the conspiracy that the American armed forces introduced the novel coronavirus in Wuhan.

The Chinese diplomats are now adopting social media tools like Facebook, Twitter to promote Chinese Communist Party’s agenda, while keeping a close eye on mainstream media of every country.

Chinese diplomats are now on social media platforms like Facebook and Twitter to promote the Chinese Communist Party’s agenda while keeping a close eye on the mainstream media of every country. In the last few months, it became evident that China, being the second most powerful country on earth, is no longer a sleeping giant. And this new very ‘un-Chinese’ approach is being termed as the ‘Wolf Warrior’ diplomacy.

Is China planning to invade Taiwan? There are some very clear signs of it