As Asia braces for an India-China collision, Turkey and France could collide in Africa 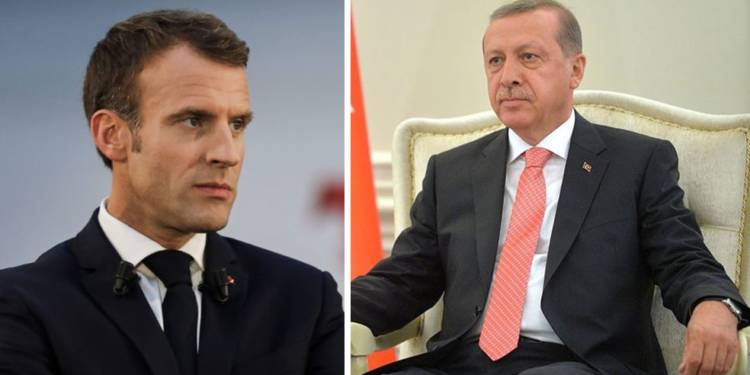 At a time when two major superpowers of Asia viz. India and China are going toe-to-toe with one another, the continent of Africa has been simmering with political and military hostilities as ties between NATO allies France and Turkey have soured in recent weeks over Libya, northern Syria, and drilling in the eastern Mediterranean.

The war of words between Turkey’s Erdogan and France’s Emanuel Macron had started last year in November. Erdogan had advised his French counterpart to “check whether he is brain dead”. Ankara is particularly miffed with Macron for his ambivalent stance and has time and again blamed France for “dragging Libya into chaos,”.

“Due to the support it has given to illegitimate structures for years, France has an important responsibility in dragging Libya into chaos,” said Turkey’s foreign ministry spokesman Hami Aksoy on Tuesday whilst launching a fresh bout of attack on Paris.

While Turkey goes all out in its criticism of France, Macron has also started with the verbal tirades and if the trend continues, the relations risk turning into a longtime rivalry.

“I think it is a historic and criminal responsibility for a country which claims to be a NATO member,” Macron said on Monday of Turkey’s role in Libya.

Last week, Macron also called Turkey’s support for the Libyan government a “dangerous game” and urged Erdogan to end his activities in the war-torn country.

France has always been wary of the Islamist regime of Erdogan and its idiosyncrasies but tensions between the two NATO allies recently escalated after a standoff between Turkish warships and a French naval vessel in the Mediterranean on June 10.

France criticized the alleged nuisance to a French ship by Turkish frigates in terms of NATO’s rules of engagement.

Before deeply understanding the rift between Ankara and Paris, one needs to understand which country sits in which dugouts to have a fair idea of the intricacies at play here in the region.

Haftar’s LNA has the backing of the United Arab Emirates, Saudi Arabia, Russia, and Egypt. Meanwhile, GNA has the backing of the UN, Turkey and Qatar. With the help of mercenaries from Syria, despite the arms embargo imposed by the UN, Turkey and GNA have been able to push Haftar. And even though the allies and Haftar have lost considerable ground in the last few months, the coalition is pushing him to continue with the conquest. While Haftar is being viewed by the world as a better leader, the GNA offers a highly Islamist regime and this is where the world stands divided, especially the Muslim world, as reported earlier by TFI.

Although the official line of the European Union coincides with that of the UN to back the GNA but the Mediterranean countries, especially France has been secretly supporting LNA as Paris has its own vested interests in the region.

It has been time and again reported that France has sent covert military help to LNA. Macron is wary of terrorism and has some other interests (like Oil fields) and therefore its stance has put it at odds with that of the EU’s position.

Paris has not openly pledged its allegiances but enough evidence points out to the fact that Macron does not want GNA to continue.

France’s power in the Mediterranean is threatened

For the uninitiated, France cannot allow Turkey to take over Libya as it would threaten France’s position in the Mediterranean. If Turkey gains control of Libya’s waters, it would essentially be able to dominate the southern Mediterranean sea, to the detriment of European nations. Germany and Italy meanwhile, have failed to take the lead in combating this threat.

Tensions over the gas fields in the region have simmered for years but escalated when Turkey signed a deal with Fayez al Serraj’s GNA to set up shared maritime borders last November.

So in opposition to the deal, a declaration was signed in May by a combined bloc of Cyprus, Egypt, Greece, UAE and last but not the least France, denouncing Turkey’s illegal drilling efforts around Cyprus, its military intervention in Libya, and its maritime borders deal with the GNA.

France had to sign the declaration as Turkey continues to usurp the precious oil and hydrocarbons of the region through warships.

All these developments have put France on its toe and that’s why it is covertly helping the Haftar corner.

Erdogan, in the stupor of reinvigorating the memory of the Ottoman Empire, has been trying to use Libya to expand its geopolitical strategy. If Turkey is not culled in the bud then it doesn’t augur well for the world community as a whole. Even UAE, the undisputed leader of the Islamic world considers it an ideological battle and has been going for Ankara’s throat consistently.

The war of words between Erdogan and Emmanuel has escalated but with the world economy crippled by COVID-19, it remains to be seen whether France will physically enter the battlefield in Libya to take on Turkey’s mercenaries and soldiers.

Now that China is the declared villain of the world, India can help Russia lose the tag of a global pariah