‘Send in the military,’ France enters the fray to slam Turkey’s Navy. Now Erdoğan is surrounded on all directions 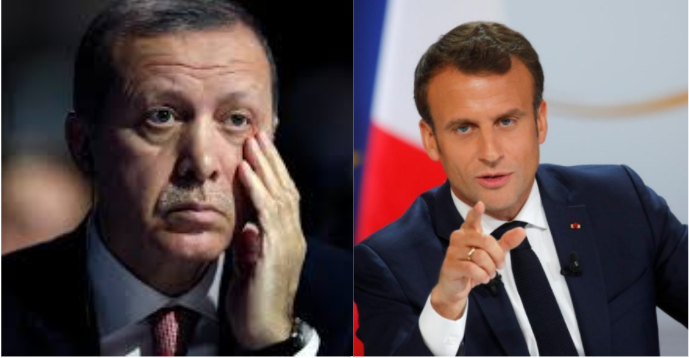 Turkey’s Islamist President Recep Tayyip Erdoğan cannot just bully around Cyprus and Greece in the Eastern Mediterranean any longer since France has physically entered the conflict zone. French President tweeted, “The situation in the Eastern Mediterranean is worrying. Turkey’s unilateral decisions on oil exploration are causing tensions. These must end to allow a peaceful dialogue between neighbouring countries and allies within NATO.”

Macron added, “I have decided to temporarily strengthen the French military presence in the Eastern Mediterranean in the coming days, in cooperation with European partners including Greece.” Macron has decided to dispatch two Rafale fighter jets and a naval frigate- ‘Lafayette’ to counter the growing Turkish threat to Cyprus and Greece.

The latest French move has come amidst heightened tensions between Greece and Turkey. Ankara has been frequently intruding research and survey ships into Greece’s Exclusive Economic Zone for exploring oil and natural gas in the Aegean Sea and Eastern Mediterranean.

On August 10, Turkey issued another NAVTEX alert for seismic research of the vessels– Oruç Reis, Ataman and Cengiz Han– till August 23. The move was provocative as the NAVTEX alert was for a region that is within 180 km of the Greek Kastellorizo Island. As per the UNCLOS (UN Convention on the Law of the Sea), the Continental shelf extends up to 200 kilometres from the baseline. Economic activity cannot be carried out in this zone except with the consent of the country having jurisdiction over the 200-kilometre radius from its baseline.

It is also accepted that the Islands of a country also have a baseline. But Turkey, being led by a rogue Erdoğan regime, is not a signatory to the UNCLOS. Ankara has its own bizarre interpretation of international maritime law that islands do not have Continental Shelves. Therefore, it has been blatantly intruding into the Continental Shelves of both Cyprus and Greece.

On Thursday, Turkish President himself made some highly provocative remarks, after Greece condemned the Turkish move of sending research vessels accompanied by warships to the waters near Kastellorizo Island as illegal. Erdoğan said, “We said that if you attack our Oruc Reis you will pay a high price, and they got their first answer today.”

The Greek Prime Minister tweeted, “I thank President Macron for his solidarity.” He added that President Macron “is not only a true friend of Greece but also a fervent protector of European values and international law.”

Macron had shown solidarity for Greece in Greek, and the Greek Prime Minister Kyriakos Mitsotakis thanked him in French. The Greek Defence Ministry has also revealed that the French frigate Lafayette and helicopter carrier Tonnerre also conducted joint exercises with four Greek frigates on Thursday.

All the while, Turkey has been irked by French intervention and has accused Paris of “provoking” to take “wrongful” steps. Ankara is rattled by the prospect of direct French intervention, because while Germany remains the biggest economy in the European Union, France is the deadliest European military power.

Macron himself is trying to return the favour to Erdoğan here. Turkey has been bullying Southern European countries with its refugees’ threat and Libyan intervention. While France backs the Haftar-led LNA forces in Libya, Erdoğan has gone berserk with its mercenaries supporting the Muslim Brotherhood regime in Tripoli. Now, Macron is getting back to Turkey in the Eastern Mediterranean. Macron is cornering Erdoğan in this region.

Apart from military support in Cyprus and Greece, Macron’s initiative to reach out to Lebanon after the Beirut blast has also caught the attention of the world.

The location of Lebanon is such that France can directly monitor and hinder Turkish advances towards the Cyprus and Greek waters.

French ambitions must be to ultimately enter Libya in a direct way instead of just covert supplies support. Macron himself has issued some very angry statements accusing Turkey of playing “a dangerous game” in Libya. Ankara itself has been brutally undiplomatic in its replies to the French President.

After Macron criticised Turkey for its irresponsible role in Libya, Turkish Foreign Minister replied by saying that the French President suffered from an “eclipse of the mind.”

Now, if France has to send boots on the ground in Libya, then it needs to have a solid presence in the Eastern Mediterranean and that seems to have started already with Lebanon, Cyprus and Greece.

Macron had been holding back in his Eastern Mediterranean ambitions till now, because, he knew that he will not find much support from an Angela Merkel-led EU. Turkey itself uses a divided EU with German Chancellor Merkel’s de facto leadership to bully the entire Continent. Even now Erdoğan is saying that he would hold a dialogue with the German Chancellor Angela Merkel and the European Council President Charles Michel to discuss the tense situation.

Macron now knows that he will have to take matters in his own hands. He has started with reinforcements in Greece and is going to build some consensus on Erdoğan being the bad guy threatening the peace of the entire Mediterranean region. The French President has thus decided to put Turkey’s Islamist President in his place.

India planning a port for entire Indo-Pacific minus China? A genius plan to strengthen the supply chain