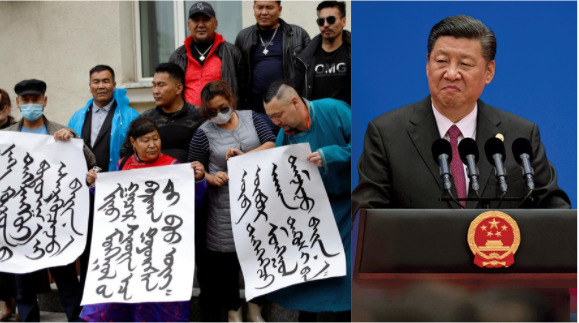 As China seeks to establish linguistic and racial homogeneity by imposing Mandarin and encouraging Han Chinese domination, different parts of the Communist country are rising in rebellion. Apart from Tibet and Xinjiang, Inner Mongolia is now coming into the limelight as the occupied Chinese territory is now standing up to Chinese colonialism.

As per recent reports, popular protests have erupted in China’s Northern Region of Inner Mongolia. Thousands of ethnic Mongolian students and parents are protesting as the Chinese Communist Party phases out Mongolian-medium teaching in the Inner Mongolian schools. The protests are likely to reignite the Inner Mongolian Independence Movement that seeks the establishment of an independent Inner Mongolian State or reunification of Mongolia as a whole, by separating from China.

According to Radio Free Asia, protests have broken out in all major Inner Mongolian cities including Tongliao, Ordos, and the regional capital, Hohhot. One student is also learnt to have jumped to death as Beijing plans to uproot Mongolian culture in Inner (or Southern) Mongolia.

Radio Free Asia confirmed the report of the high-school student’s death from a local resident who said, “A student on the fourth floor (of a Tongliao school) jumped off … because his mother was detained outside the school.”

The protests in Inner Mongolia are driven by the apprehension that Mandarin Chinese imposition and relegation of Mongolian to a foreign language in the region is a part of the CCP drive to coerce assimilation of ethnic minorities into the Chinese Han culture.

Radio Free Asia reports that one placard in the Inner Mongolian demonstrations read, “It is the inalienable right of Mongolians to learn the Mongolian language.”

The parents in Inner Mongolia are now threatening to boycott schools and keep their children home. The 6.5 million-odd ethnic Mongols in China seem to feel that it is better not to educate their children in the CCP governed schools of China because Mandarin-medium education would uproot even whatever remains of the Mongolian culture in Inner Mongolia.

He added, “In the past 70 years Mongolian people have gone through a lot, including genocide, political oppression, economic exploitation, cultural assimilation and environmental destruction. So after 70 years of China’s heavy-handed policy, the Mongolian language is the last remaining symbol of Mongolia.”

Chinese actions in Mongolia reek of CCP General-Secretary Xi Jinping’s brutal policy of repression to established Han Chinese hegemony over minority cultures and races. The changes being made in Mongolia resemble those which have been made in Tibet and Xinjiang.

Xi Jinping’s brand of establishing Han Chinese domination starts with Mandarin imposition and assimilation of ethnic minorities in the Han Chinese culture. Finally, if there is any resistance from the minority groups, the CCP carries out a racial genocide like the mass murder of Buddhist monks in Tibet or the Uyghur concentration camps in Xinjiang. Now, Inner Mongolia seems to be going down the same path.

Inner Mongolia has always been diverse from China. The Mongolian language doesn’t fit in with Mandarin Chinese or the Han Chinese culture, and the Mongols themselves are a different ethnic group from the Han Chinese majority in China. As such, Inner Mongolia resembles the landlocked country of Mongolia and not China.

An Independent Inner Mongolian People’s Republic did come up for a very brief period between September 9, 1945, and November 6, 1945. But it was soon taken over by the Chinese Communist Party which eventually organised the Inner Mongolian Autonomous Region. And we do know how autonomous, China’s autonomous regions like Tibet, Xinjiang and Inner Mongolia are. The repression and curbs here are worse than even mainland China.

In the last seven decades, the People’s Republic of China has been cracking down on the ethnic Mongols in the most insidious of ways. China started a demographic onslaught in Inner Mongolia that reached its peak during the Cultural Revolution between 1966 and 1976. 2,00,000 urban middle school graduates were stormed into Inner Mongolia by the Chinese government initiative, and the migration of Han Chinese majority into Inner Mongolia remains an ongoing process.

Violent clashes have been reported from Inner Mongolia in the past, as Han Chinese immigrants often end up engaging in violence with the ethnic Mongolian herders.

According to a refworld report, Hada, a Mongolian activist who spent 19 years in jail for speaking up against human rights violations in Inner Mongolia said, “The Han Chinese are moving in and occupying the land belonging to ethnic Mongolians, and this causes disputes; they are all over the grasslands belonging to the herders.” He added, “It is happening every minute of every day, but government policy is to wipe out nomadic culture.”

Inner Mongolia is losing its culture bit-by-bit and now the imposition of Mandarin language in its schools seems to be the final nail in the coffin. Ethnic Mongols are well aware of the CCP playbook and are therefore standing up to Chinese colonialism. They know it is now or never, as if they don’t confront China now, the CCP will completely uproot the ethnic Mongol culture and language from their homeland itself.