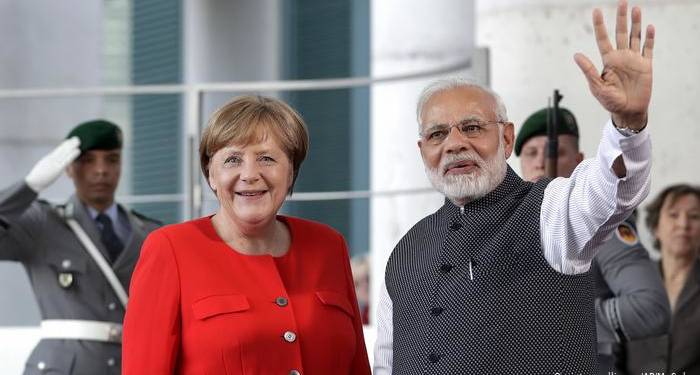 China has faced yet another diplomatic setback; this time from the supposedly China-friendly German Chancellor Angela Merkel’s administration. Till now, Merkel has been defiant when it comes to accepting Washington’s leadership and strongly decoupling from China due to trading interests of Germany with Beijing. But it seems that she doesn’t want to lose out on close ties with New Delhi.

Therefore, Berlin has rolled out an India-centric Indo-Pacific strategy. The German Foreign Ministry released the strategy on Wednesday, which contains several indirect references to the Dragon’s hawkish behaviour in the Indo-Pacific that threaten to challenge the present rules-based world order. It also seeks to enhance engagement with New Delhi in the strategically significant Indo-Pacific.

Berlin’s Indo-Pacific strategy has to be the most severe diplomatic shock that Beijing has suffered until now. The strategy released by the German Foreign Ministry goes on to suggest opening a dialogue with institutions in which New Delhi plays a key role, including the Bay of Bengal Initiative for Multi-Sectoral Technical and Economic Cooperation (BIMSTEC) and Indian Ocean Rim Association for Regional Cooperation that consists of 22 countries bordering the Indian Ocean- New Delhi’s natural sphere of influence.

Germany’s decision to release an India-centric Indo-Pacific strategy is largely a realisation of how the strategic hotspot of the world is shifting from the Atlantic to the Indo-Pacific. Western Europe is itself losing the kind of strategic relevance that it once used to enjoy, and the focus of the world is now India, Japan and Australia as the Indo-Pacific region is fast becoming the venue of a great power competition between a Communist-Authoritarian China and the democratic world.

Germany doesn’t want to miss the bus, even though the Merkel administration itself keeps criticising Donald Trump administration’s policy to move away from the North Atlantic Treaty Organisation (NATO) and seek a formal alliance with its QUAD partners-  India, Japan and Australia to keep China in check.

The German Foreign Ministry has itself stated, “As an internationally active trading nation and proponent of a rules-based international order, Germany – embedded in the European Union – has a great interest in participating in Asia’s growth dynamics and in being involved in shaping the Indo-Pacific region, as well as in upholding global norms in regional structures.”

China was feeling very comfortable with the Merkel administration all this while because it felt that Germany will never join in US President Trump’s diplomatic onslaught against Beijing.

However, Merkel’s refusal to accept Trump’s leadership for taking on China didn’t mean that Germany became friends with China. Germany’s foreign policy and geopolitical strategy is dictated completely by its business and trade interests, as also Berlin’s great power ambitions.

Germany’s Indo-Pacific strategy itself alludes to how trading interests have guided its foreign policy. The strategy released by the German Foreign Ministry stated, “More than 90 per cent of the world’s foreign trade is conducted by sea, a large part of which via the Indian and Pacific Oceans. Up to 25 per cent of the world’s maritime trade passes through the Strait of Malacca. More than 2000 ships per day transport goods between the Indian Ocean and the South China Sea via this bottleneck. A disruption to these maritime trade routes and thus to the supply chains to and from Europe would have serious consequences for the prosperity and supply of our population.”

While Germany understands that it must play a bigger role in the Indo-Pacific before other European powers start reaching the crucial zone, it is relevant to mention here that even among the Indo-Pacific powers, Germany has made it a point to attribute a ‘key role’ to India. Here again, Berlin is guided by two major factors, apart from India’s strategic location controlling the Strait of Malacca– a narrow chokepoint in the Indo-Pacific that also finds mention in Germany’s strategy.

One, India has remained a close friend of Germany and therefore Berlin finds no rhyme or reason in antagonising India. And two, India is a humungous market that is growing even bigger which pushes the German Chancellor to maintain a very friendly position with India.

India and Germany are both members of the G4 nations that also include Japan and Brazil. These four countries support one another’s bid for a permanent UN Security Council seat. Berlin’s Indo-Pacific strategy goes as far as cooperating with India and Japan for UNSC reforms to maintain a rules-based order in the Indo-Pacific.

Since Germany is the biggest economy in the EU, Merkel is the de facto leader of the Brussels-based intergovernmental body and therefore she wants the EU to realise the enormous trade and investment potential in India. Even ahead of the India-EU Summit last month, sources had said that EU is one of India’s largest trading and investment partners but the Brussels-based intergovernmental bloc has great untapped potential with India.

If China thought that it had a strong partner in Germany, then it was grossly mistaken. For its own ambitions, Merkel kept refusing to rally behind Trump’s decoupling from China. But when it came to India, Merkel couldn’t resist the offer of entering the Indo-Pacific region with India as its key ally in the region.

Cyprus has an old grudge against Turkey, US is empowering it to vent it out