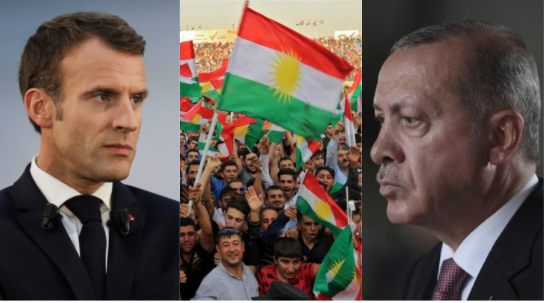 The rivalry between France and Turkey is deepening. The French President Macron and his Turkish counterpart Recep Tayyip Erdoğan are already locking horns in the Eastern Mediterranean and Libya, but now Macron has opened a new front. France is weaponizing the struggle of the Kurds- an Iranic ethnic group spread across South-eastern Turkey, North-western Iran, Northern Iraq and Northern Syria. The French President is also offering support to Baghdad which has been protesting against Turkish incursions.

The Turkish Kurds have been fighting for autonomy under the banner of Kurdistan Workers’ Party (PKK) and have their bases in Iraq. Ankara, however, brands Kurds as terrorists and has been launching military raids into Northern Iraq on the pretext of targeting PKK activists. Turkish military raids have killed Iraqi civilians and officials, but Erdoğan insists on carrying out military raids in Iraq without the latter’s consent.

In fact, France has been supporting Iraq in its opposition to Turkish military raids for the past one month. Last month, a Turkish drone strike in the Iraqi Kurdish region killed two high-ranking Iraqi officers, inviting a sharp reaction from Baghdad, which denounced the Turkish strike as “flagrant aggression”, while the Iraqi Foreign Minister Fuad Hussein also pleaded the Arab nations for “a united position to force Turkey to pull out its troops who have infiltrated into Iraq.”

After which, France had immediately jumped in to support Iraq’s case and had slammed Ankara over the drone strike. The French Foreign Ministry said, “France deplores this serious development,” and also asserted, “France is deeply attached to full respect for Iraqi sovereignty.”

Now, things have escalated even further. In the context of growing Turkish-Iraqi tensions, French President Emmanuel Macron visited Iraq recently. In the process, Macron became the first head of state to visit Iraq after Iraq’s new Prime Minister Mustafa al-Kadhimi stormed to power in May this year. The visit was crucial and directed against Ankara, as Macron reaffirmed his support for Iraqi sovereignty. The French President said the main challenges to Baghdad’s sovereignty were Islamic State militants and foreign interference.

Ramzy Mardini, an associate at the University of Chicago’s Pearson Institute, said, “It’s hard to see how Erdoğan doesn’t interpret Macron’s use of his sovereignty initiative against foreign interference in Iraq as a way of undermining Turkish foreign policy.” During his Baghdad visit, Macron also met the President of the Kurdistan Region of Iraq, Nechirvan Barzani, signalling how France stood by the Kurds who are being wronged by the Turkish President Erdoğan in Syria, Turkey and Iraq.

Within Iraq, anger is building up against Turkey even amongst the Iraqi Kurds because they are the ones bearing the brunt of Ankara’s so-called strikes against the PKK. The Iraqi Kurds are being killed in the name of targeted Turkish strikes against the PKK activists. Also, the French President Emmanuel Macron enjoys warm relations with Kurds, given the diplomatic exchanges in Paris and Erbil, the capital of Iraqi Kurdistan.

France has been one of the best friends of the Kurdish community that has been facing relentless violence and lack of autonomy in the entire region. Recently, for example, Turkey criticised French high school textbooks that contain information about Kurdish struggle, which Ankara conveniently dismisses as separatism. Turkey is quite clearly rattled with Macron’s increasing influence within Baghdad and the Kurds spread all over the region.

Erdoğan himself is trying to find a way out to keep the Iraqi Kurds in confidence. Therefore, the Turkish President hosted Barzani in Ankara, and according to Turkish pro-government daily, Daily Sabah, issues like bilateral relations and the joint fight against the PKK ‘terrorist group’ were discussed during Barzani’s visit. The timing of the move– just after Macron’s Baghdad visit– reveals that it was a move to control the damage.

It is rather ironic for Erdoğan to entertain Iraq’s Kurdistan Regional Government (KRG), given that it was Turkey who pushed back when the Iraqi Kurds had voted overwhelmingly in favour of a referendum for independence from Iraq way back in 2017. Even after Turkey pushed back in 2017, it was France that had come to the rescue of Iraqi Kurds. According to Mardini, “France, not Turkey, helped mediate to break the deadlock between the governments in Erbil and Baghdad that followed the Kurdistan referendum for independence.”

Macron clearly enjoys the upper hand as Turkey and France now fight over Iraq and Kurds. A Kurdish rebellion is Turkey’s worst nightmare come true as it not only causes insurgency within Turkey but also debilitates Ankara’s position in Iraq and Syria. On his part, Erdoğan is trying to exploit the frosty relations between the Turkey-based Kurdish group PKK and the Iraqi Kurdish group- the Kurdistan Democratic Party (KDP).

When it comes to Iraq and Kurds, Macron is once again humbling his Turkish counterpart Erdoğan, and it seems that Turkey is seemingly rattled.