China exploits Xinjiang for massive cotton and tomato exports. Now Trump is all set to ban them 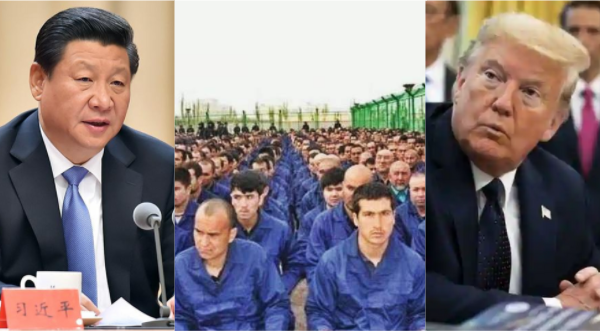 The Trump administration is reportedly deliberating upon an imminent ban on products originating out of Xinjiang as tensions between China and the US continue to rise to an all-time high, amidst an already prevalent trade war. The commodities which could be banned are cotton, cotton products and tomatoes, all of which form a great part of China’s exports globally, and also which are mainly accounted for from the Xinjiang region. The move, which is set to send the already dilapidated and overestimated Chinese economy is bound to send it in a further tizzy.

The US Customs and Border Protection (CBP) is currently preparing Withhold Release Orders which will allow it to detain shipments based on suspicions of forced labour involvement, BBC reported. “We have reasonable but not conclusive evidence that there is a risk of forced labour in supply chains related to cotton textiles and tomatoes coming out of Xinjiang,” CBP Executive Assistant Commissioner Brenda Smith told Reuters. “We will continue to work our investigations to fill in those gaps,” she added.

The reported ban on products by the US originating out of Xinjiang is being worked out owing to the usage of forced labour and child labour by the Chinese for the manufacturing of cotton products and. Further, the US is also about to ban imports out of China’s illegally occupied Xinjiang province for the CCP’s brutal crackdown on the human rights of the native Uighur Muslims and Kazakh communities.

It is not yet clear whether the ban would be put in place only for those products which are directly shipped from Xinjiang or whether it would also encompass a blockade of those products which will reach the United States via third countries, the latter being a more hurtful option. A blanket ban on the import of cotton and its products and tomatoes from China would send irreversible jitters down the spine of the CCP, as China produces about 20% of the world’s cotton with most of it comes from Xinjiang.

It is no secret that China has been employing Uyghur Muslims as forced labourers not just in Xinjiang, but is also shipping them off to other Chinese provinces against their will, where it keeps them in inhuman and prisoner-like conditions, with no freedom whatsoever to even step foot out of the factories or their places of work. The usage of Uyghurs and their children by China as forced labourers in complete contestation of basic human rights is a major reason as to why the Trump administration is looking to ban imports from the Chinese-occupied far western province.

Over the past three years, China has detained over a million ethnic Kazakh and Uyghur Muslims into what they claim are ‘internment camps’, but what in reality, bear an eerie resemblance to Nazi Germany’s concentration camps. Meanwhile, Muslim Uyghur women are also forced to sleep with CCP officials, mostly of Han descent, as China aiming to execute an ethnic genocide in Xinjiang.

The ban on imports from Xinjiang will go on to hurt China, as it will be made to pay the price for violating the basic human rights of Uyghurs. It is also expected that multinational and big apparel brands, who depend on cotton and its products from Xinjiang will be shifting their supply chains away from China to other countries. Thus, China will be made to undergo a rather expensive punishment for its violations in Xinjiang.