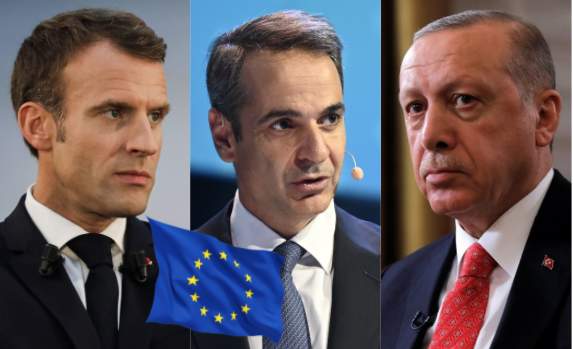 The clock is ticking for Ankara and its madmen leader Recep Tayyip Erdogan as lawmakers in Brussels are drawing up a list of potential sanctions against Turkey, in an effort to get Ankara to limit its disputed maritime gas exploration in the eastern Mediterranean to its own territorial waters.

Cyprus and Greece—the two countries most troubled by the menace of Turkey have issued a closeted warning to the EU saying they will only agree to sanctions against Belarus — which are finished and ready for approval — if sanctions are also levelled on Ankara. The measures can only be enacted by unanimous consent, so each member country can potentially block the move.

“We do need dialogue, but not when held at gunpoint. What threatens my country’s security and stability threatens the well-being and safety of all EU member states,” Greek Prime Minister Kyriakos Mitsotakis said, in an article published in the London Times, Germany’s Frankfurter Allgemeine Zeitung and France’s Le Monde newspapers.

Turkey’s fellow East Mediterranean countries- Israel, Egypt, Greece, Cyprus and all major global powers including France, Russia, India, the UAE, and the US are breathing down Ankara’s neck and sanctions from the EU looks given.

Reported by TFI, the combined bloc of Cyprus, Egypt, France, Greece, and the UAE had already signed a declaration in May denouncing Turkey’s illegal drilling efforts around Cyprus, its military intervention in Libya, and its maritime borders deal with the GNA. The EU sanctions are the natural progression

A summit of seven European Union member states on the Mediterranean, due to take place on Thursday, will push for a common EU position regarding Turkey. The summit is being hosted by French President Emmanuel Macron who himself has been at loggerheads with Turkey.

France has strongly backed Greece and Cyprus in a growing standoff with Turkey over hydrocarbon resources and naval influence in the eastern Mediterranean, which has sparked fears of more severe conflict.

The French President has assumed paramount importance in the conflict and has overshadowed Germany, which, truth be told, has looked out of ideas.

Berlin — which now holds the EU’s rotating presidency — has attempted to mediate between the three countries, with little to show for the effort. The de Facto leader of EU, Angela Merkel has been one big dud in the entire exchange as it looks like Germany has succumbed to Turkey’s whimsies

If the growing pressure on EU is anything to go by and if sanctions do come into play, it wouldn’t be a hyperbole to predict that the EU could formally end its long-running negotiations with Turkey over EU membership,

The United States has had just about enough of the Islamist President Erdogan and has decided to partially lift the decades-old arms embargo on Cyprus, one of the biggest victims of Turkish expansionism and belligerence in the Eastern Mediterranean. Ankara, which had violently partitioned Cyprus in 1974, is responsible for most Cyrpus’ woes today.

The US State Department has disclosed that from October 1, the United States will remove the embargo for one year on sale or transfer of “non-lethal defence articles and defence services”, which was imposed in 1987 with the hope that it would help reunify the island country of Cyprus.

Ankara has emerged as a villain in the new world order where its President Erdogan thinks himself off as a ‘wannabe khalifa’ who has the responsibility to usher the world into a bygone era. The quest of creating an empire reminiscent to that of the Ottoman Empire, might just spell doom for Turkey, and the EU sanctions could be the beginning of the end for it.

‘One last thing before I go,’ Shinzo Abe makes sure he gifts beloved friend PM Modi with a military pact