Erdoğan retreats in shame after France, EU and USA come together to back Greece up 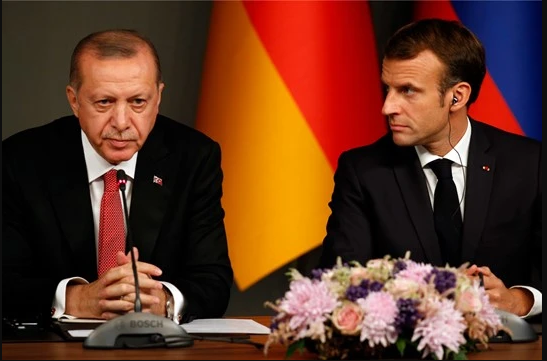 Turkey’s Islamist President Recep Tayyip Erdoğan is being put in his place, as France and the US have launched a relentless onslaught against Ankara. After weeks of Turkey’s belligerent operations in Greece’s maritime sphere, Erdoğan is now retreating out of the disputed waterways. Turkey has withdrawn its seismic survey vessel, Oruc Reis, whose research in the disputed areas of the Eastern Mediterranean has led to a bitter standoff between Turkey and Greece.

Withdrawing Oruc Reis is a major about-turn on part of Erdoğan who was earlier saying, “We said that if you (Greece) attack our Oruc Reis you will pay a high price, and they got their first answer today.” Erdoğan is therefore signalling that he wants to open diplomatic channels after the US and France push back against Turkish aggression. The US and France are empowering Turkey’s enemies, endangering Ankara’s NATO status and even creating a threat of EU sanctions from the European Union.

The US has been constantly taking note of Turkey’s expansionist aggression in the Eastern Mediterranean and Erdoğan knows that his misadventures could compel Washington to kick Turkey out of the North Atlantic Treaty Organisation (NATO).

And then the Trump administration is also lending firepower to Turkey’s arch-foe, Cyprus. Recently, the US also lifted the decades-old arms embargo on Cyprus. Today, Turkey is bullying both its Eastern Mediterranean neighbours– Cyprus and Greece– and therefore the removal of the arms embargo on Cyprus came as a stern warning to Erdoğan.

The US has been marginalising Turkey as a NATO ally, by refusing to even export arms to Ankara in a bid to punish the wannabe Khalifa, Erdoğan for its expansionist ambitions. The US is, therefore, weighing down Turkey and incapacitating it militarily.

On the other hand, France is more directly and physically involved in the Eastern Mediterranean. While it was possible for Turkey to bully both Cyprus and Greece at will, Ankara falls toothless in face of the much bigger military giant in France. French President Emmanuel Macron has been deploying military assets including the Rafale fighter aircraft and a naval frigate- ‘Lafayette’ in the Eastern Mediterranean which has, clearly, caught Ankara napping.

Moreover, France is empowering Greece itself and ensuring that Athens can turn the tide against Ankara.

Greece has announced that it will be acquiring no less than 18 new Rafale fighter aircraft, for its military, along with four new frigates. Additionally, four frigates of Greece will also be refurbished. The Greek Prime Minister, Kyriakos Mitsotakis said that the country’s armed forces will also obtain new anti-tank weapons, new torpedoes and new guided missiles, as well as hire 15,000 more people over the next five years. Four new helicopters for the armed forces are also all set to be acquired.

Therefore, while the US is drying up Turkey’s future military expansion plans, France is making Turkey’s arch-nemesis much more powerful. The military firepower balance is tilting against Turkey, and Erdoğan, therefore, understands that it wouldn’t be prudent on his part to continue his geopolitical onslaught in the Eastern Mediterranean.

Turkey is also being made to feel that its rogue policies will not go unpunished. Much to Turkey’s dismay, France is ensuring that the European Union realises the threat posed by a rogue Recep Tayyip Erdoğan, and is pushing for sanctions against Turkey along with Greece and Cyprus for its persistent transgressions into waters where its vessels have no business being.

The US and France have therefore managed to curb what could have emerged as a major military conflict in the Eastern Mediterranean. Macron and Trump have tilted the balance of power against Turkey, and therefore the distortionary power has been put in its place to ensure that the status quo is maintained in the Eastern Mediterranean waters. Turkey, which is not a signatory to the UNCLOS, was violently claiming sovereignty over the waters of both Greece and Cyprus, but it is now retreating in shame as the US and France push it back relentlessly.

Now, China has sinister plans to take on Bhutan but India is ready to give it a Doklam 2.0 experience

In your face European Union! UK signs a bigger and better post-Brexit trade deal with Japan