India is teaming up with Saudi Arabia 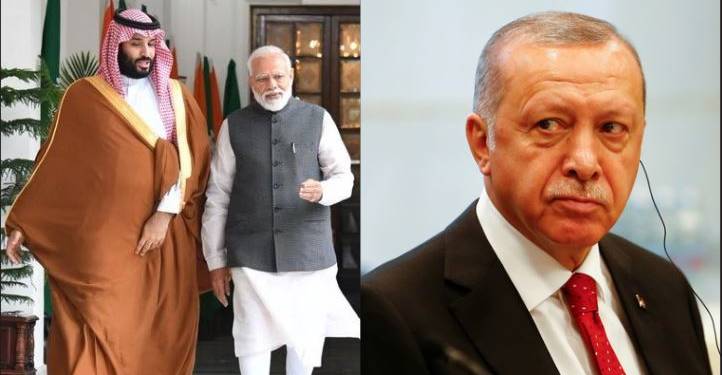 In a development which is being called extremely rare and significant by international relations enthusiasts, both India’s Foreign Minister Dr S. Jaishankar and National Security Advisor Ajit Doval were seen in the Saudi National Day celebrations at the Saudi embassy in New Delhi. The last time the country’s Foreign Minister attended any country’s national day or corresponding significant event, was in 2018 when then EAM Sushma Swaraj was seen at the Russian Embassy in Delhi on the occasion of Russia Day. This year, for both the External Affairs Minister and NSA to be present at the Saudi Embassy, along with Union Minority Affairs Minister Mukhtar Abbas Naqvi has definitely got many analysts thinking.

The presence of India’s EAM and NSA together at the Saudi embassy has come in the backdrop of Turkey raising the Kashmir bogey at the UNGA once again, toeing blatantly the Pakistani line on the bilateral issue. The Islamist President of Turkey, Recep Tayyip Erdoğan, who likes to think of himself as the upcoming Khalifa of the Muslim world, called the Kashmir “conflict” a “burning issue” in his virtual address during the UNGA debate and further said, “Steps taken following the abolition of the special status of Jammu-Kashmir further complicated the problem.” He added, “We are in favour of solving this issue through dialogue, within the framework of the United Nations resolutions and especially in line with the expectations of the people of Kashmir.”

Last year too, Erdoğan had referred to Kashmir as a region which was under siege by India. This year, India comprehensively called out Erdoğan for raking up an issue at the United Nations in which neither him nor his country were stakeholders by any measure, with S Tirumurti, India’s permanent representative to the UN saying, “We have seen remarks by the President of Turkey on Indian Union Territory of Jammu & Kashmir. They constitute gross interference in India’s internal affairs and are completely unacceptable. Turkey should learn to respect sovereignty of other nations and reflect on its own policies more deeply.”

It is a well-known fact that Saudi Arabia and Turkey are rivals. While Saudi is the leader of the Muslim world, Turkey is on the lookout of usurping that title from the Islamic hegemon, by resuscitating the Ottoman Empire no less. In fact, the Saudi-Turkey rivalry is just as hot as that between the Saudi Kingdom and Iran, if not more. Essentially, Turkey is opposed to the idea of Saudi Arabia remaining he unchallenged leader of Muslims all over the world, even as the wannabe Khalifa in Erdoğan flounders around for attention in the region.

By deputing both India’s Foreign Minister and NSA to the Saudi embassy yesterday, Prime Minister Modi has signalled to Turkey that the current Islamic hegemon has the unflinching support of India, and that just as Turkey is a rival for Saudi Arabia, it is also now a foe for India, and will be treated in a similar manner. It is now also known that Turkey has been indulging in anti-India activities for quite some time, which range from funding of Kashmiri separatists to even facilitating the recruitment of Indian youth, mainly from Kerala, to terror organisations.

Turkish media, meanwhile, in order to serve their master Erdoğan, is employing hordes of Pakistani journalists and media persons from Kashmir with a declared hatred towards the Indian state. As reported by TFI earlier, Turkey has employed a large number of Pakistani nationals with extremist inclinations in the country’s media, especially in the two most prominent global news platforms which it offers. Further, Turkish media is also on the lookout for India-hating Kashmiris, who are willing to act as propaganda lilacs for Erdoğan as he weaponizes the Kashmir issue in order to project himself as the indisputable leader of the Muslim world.

India siding with Saudi Arabia comprehensively, and also displaying grandly the friendship between the two nations is bound to irk Turkey and its stooge – Pakistan. India’s foreign policy in the Middle East has been a major success, especially under Prime Minister Modi, who has ensured that the Gulf countries side with India on the issue of Kashmir, while ignoring Pakistan’s rants. The only audience which Pakistan now has globally is that of Turkey, as even China refrains from commenting on the Kashmir issue. The Saudi-led OIC too refrains from making extreme remarks on Kashmir, and the few times that it has, in order to satiate an irritating Pakistan’s desires, India has made its reservations known to the forum.

Saudi Arabia and Turkey are involved in the Libyan War, where the former, backed by countries like UAE and France is supporting the Haftar-led Libyan National Army, while the latter rallies behind the Muslim brotherhood government. Muslim Brotherhood, as a concept and as an entity both, is something which Saudi Arabia despises. Meanwhile, Turkey wholeheartedly supports the same in the hope of leading the Muslim world in the near future.

When Saudi Arabia severed all ties with neighbouring Qatar due to the latter supporting the Muslim Brotherhood along with several other terror groups in the region, Turkey had come to Qatar’s rescue, supplying goods there that had been disrupted by Saudi Arabia-imposed sanctions. Turkey also increased its military cooperation with Qatar by increasing the number of troops it maintains in the country. This infuriated Saudi Arabia.

India has therefore now, much to Turkey and Pakistan’s dismay, teamed up with Saudi Arabia. Saudi Arabia’s envoy to India Saud M Al Sati yesterday called India a “close friend and an important strategic partner,” one with whom the country has “cultural, socioeconomic engagement and strategic partnership” based on “mutual respect and shared interests.” As such, the signal to Turkey seems to have been delivered lock, stock and barrel.