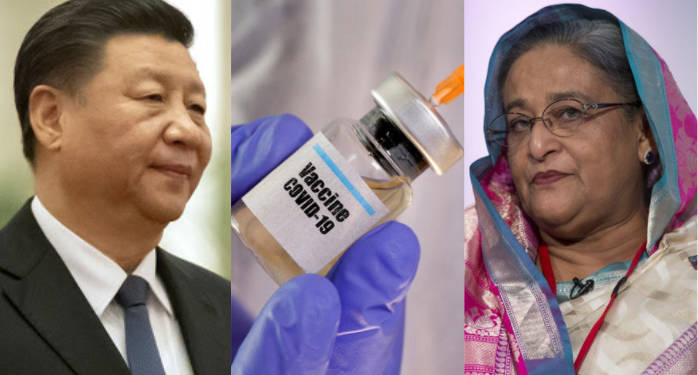 Chinese foreign policy is in tantrums. On the one hand, the developed world is angry, and on the other hand, China is hell-bent on kicking its new friends out. In the latest, China has asked Dhaka to pay up if it wants phase-3 trials of shady Chinese vaccine in Bangladesh.

One of three Chinese vaccines in the phase 3 trial is the Sinovac Biotech’s CoronaVac vaccine. It is the Sinovac company through which after promising 100,000 free vaccine doses, China has now even refused to carry out vaccine trials in Bangladesh. Sinovac wants Bangladesh to co-fund the vaccine while being oblivious about the share of funds expected out of Bangladesh Government.

Officials in Dhaka told that it was a sudden addition to the proposal, and co-funding was not mentioned in the original agreementof 27th August. Bangladesh health secretary Abdul Mann told The Daily Star (Bangladeshi Newspaper) “They (Sinovac) informed us that they would be able to start the trial soon if we co-fund the initiative. We are not dependent on Sinovac. The government is looking for other avenues to get the vaccine right after it is developed.”

As this step runs contrary to China’s vaccine goodwill diplomacy, it raises some pertinent questions. What made China change its mind? At a time when China needs allies the most, why take steps that will move friends further away?

China for long has tried to use the same Modus Operandi, i.e. flood small countries with so much debt that they are forced to partially do away with their sovereignty and become a vassal state, for example, Pakistan. However, Bangladesh is not Pakistan, and it has a growing economy & geopolitical acumen. Just recently, Dhaka & Washington had their first-ever high-level consultation on economic partnership virtually.

During the event,private sector development advisor Salman F Rahman said that the USA is Bangladesh’s largest export market and also the largest investor. This type of comment can be seen as a signal to China that Dhaka is not willing to prostrate in the face of Chinese attempt to buyout Bangladesh.

In addition to the US-Bangladesh virtual meet, PM Modi and PM Sheik Hasina are scheduled to meet virtually in December. India is also increasing its investment under its neighbourhood first policy together with Japan. It has led to a resurgence of investment spree by India into Bangladesh’s multiple domains and sectors.

To read more: India’s Energy and Vaccine diplomacy – A masterplan to snatch Myanmar, Sri Lanka, Maldives, and Bangladesh from China

All these developments have for sure irked China. As after investing a fortune in Bangladesh, the involvement of the USA in the economic journey of Dhaka has killed any opportunity China had of turning Bangladesh into a peripheral province and a semi-colony.

This is just an expression of sheer frustration on the part of China, and at a time when small countries are dealing with the worst catastrophe, this rubs in all the wrong ways. Beijing, in its efforts to showcase its economic superiority, and by asking a blank cheque from Bangladesh, has traversed a path of no return. PM Sheik Hasina has supposedly learnt that China is morally bankrupt and can never be trusted.

This is the worst foreign policy choice China has made, even though there are plenty other too. No country will ever make its citizen guinea pigs and then pay the country which is using them as test subjects. Providing vaccines which are considered to be faulty in their phase 3 trials cannot be justified in any other way than on Humanitarian and goodwill grounds. As China has removed goodwill by asking Bangladesh to pay for these vaccines, it shows very badly as to how China is perceived by the world, and that it is not a responsible power.

To read more: ‘We feel like Guinea pigs,’ Move aside Debt trap diplomacy, China has now had a vaccine trap to exploit poor nations

By asking Bangladesh for co-funding the 3rd phase of vaccine trials, China has dented its relationship with Dhaka. PM Sheik Hasina should condemn this disrespect and decline the request from a Chinese company for co-funded trials. India must showcase its seriousness for neighbourhood first policy by providing vaccines to Bangladesh and other neighbours as soon as they become available.