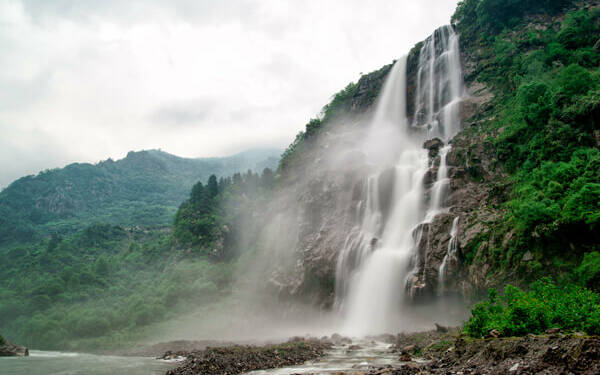 With an eye on China, Arunachal Pradesh government and Indian Army are looking at the prospects to improve the infrastructure at Chumi Gyatse Falls, also called holy waterfall, which is a collection of 108 waterfalls at the Sino-Indian border. This is one of the many development projects going on the Indo-China border.

The Chumi Gyatse falls are highly revered and holy for the Monpas (Tibetan Buddhists). Thus, making it a place of religious importance for these people on both sides of the border. The situation is somewhat similar to that of Sikhs and Gurdaspur Gurudwara. Monpas are one of the major tribes of Arunachal Pradesh with most of them concentrated around the Tawang and West Kameng districts.

The state has already built roads which lead to Tsechu village near the Line of Actual Control (LAC), which is the remote village closest to the Chumi Gyatse Falls. These falls are about 110 kilometres east of Tawang. Commenting on the developments, a local resident of Khremethang village in Tawang told The Print, “It is a remote area. The connectivity has improved recently and the roads are well maintained by the district administration and the Indian Army at present. This will help boost religious and cultural tourism in the border areas and enable pilgrims to visit the sacred site.”

The strategic value of this site is its proximity with the LAC. The falls are said to be at a distance of a fourth of a kilometre from the LAC near Yangtse area (a disputed region) along the McMohan line. China, too, has understood the strategic value and has placed surveillance cameras. A defence source told The Print that China has also placed a projector and a screen overlooking the falls to get live images.

The Arunachal Pradesh government has prioritized the development project, and the inauguration of the statue of Guru Padmasambhava at Chumi Gyatse (holy waterfall) by Chief Minister Pema Khandu proves the fact.

The Indian government’s push to develop this among other sites signifies its importance towards cultural integration. Tourists from Tawang, Bomdilla, Derang, and different parts of Arunachal visit the Holy Waterfalls with footfall on the rise. These development drives will further increase the prospects of tourism and enlarge it from a regional tourist site into a major tourist attraction site.

Understanding the religious value of the site, the Indian government in recently conducted Working Mechanism for Consultation and Coordination on India-China Border Affairs meeting had proposed to the Chinese side to allow Tibetan pilgrims to visit the holy waterfalls. However, it fell on deaf ears and China did not comply with no approvals granted.

This proves that the religious freedom of Tibetian Monpas is very limited and at a larger scale the Communist regime of China has been curbing freedoms and this is the reason why people in the bordering areas have a highly negative view of Beijing.

NDA government under PM Modi has understood this, and all the government and defence machinery is making sure that the connectivity of border region is improved and together with this, the development of the accompanying regions should be as per the needs of the local people.

The Indian Government in all practical sense has launched a cultural offensive. India is trying to build on the cultural and political freedom which are not in the vocabulary of the Chinese Communist Party. By doing this, India is consolidating its borders infrastructure as well as consolidating the people in the bordering regions to stand up for the Idea of India against the Chinese bully.

Be it Ladakh or Arunachal Pradesh, Indian Government is leaving no stones unturned to enhance border capabilities and infrastructure for our soldiers as well as for making the life of people in the border areas easier. The development projects complementing the holy waterfalls will lead to the further consolidation of the Tawang region and the areas near the McMohan line. This will decrease the viability and practicality of the absurd Chinese claims on Arunachal Pradesh.

PM Modi is punching China left, right and centre. Be it QUAD, taking over heights in Ladakh, improving relations with Taiwan, support for Tibet. And now with this China’s claims of Arunachal Pradesh will become more useless.