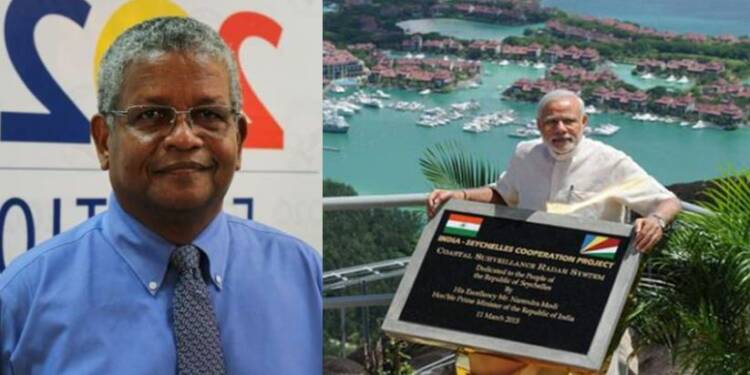 The year 2020 has been of surprises and Seychelles elections have also made big powers to relook at their calculations for the Indian Ocean Region. The Seychelles opposition has won an election first time since 1977 and the new person in the office of President, Wavel Ramkalawan is of Indian origin.

This development has raised many eyebrows in India. Analysts and observers have started saying that the election victory of the opposition is bad news as they have opposed the $550 million investment to build a naval facility on the Assumption Island which was to be used by both India and Seychelles.

Seychelles’ Coast Guards for long had to deal with piracy, illegal fishing and drug trafficking while patrolling the Exclusive Economic Zones (EEZs). This is nearly impossible as the nation’s Islands are scattered far apart. Take for example the assumption Island which is located 1,100 Kilometers from the main island of Mahe.

It was because of the concerns of Seychelles and India’s reassertion of the Indian Ocean Region from the slow encroachment by Communist China that Prime Minister Narendra Modi tried to align the Island country with India and the naval facility would have been the tool. But even after the announcement and signing of initial pact back in 2015 during PM Modi’s Seychelles visit, the then opposition Linyon Demokratik Seselwa (LDS), led by Ramkalavan, opposed it vociferously and stalled the project.

Read more: India-Seychelles closeness, yet another feather in Modi’s cap

The problems which the deal went through and the reason for the opposition to the project seemed inspired by the increasing influence of China in the Indian Ocean Region, and it came after China had taken the Maldives out of India’s sphere of influence. From this point onwards, Chinese investment grew in direct proportion to its influence in the Island nation as well as the whole of the Indian Ocean Region.

However, the things are 180 degrees opposite of what they were during the 2015-2018 period and the speculation of Chinese expansionism has become a fact in this pandemic ridden world. Be it China’s wolf warrior diplomacy of coercing countries by bullies in the garb of diplomats and officials in diplomatic missions or confronting neighbours and snatching their territories, the current dispensation in Seychelles will take all this into consideration while formulating its foreign policy doctrine.

As we see in most of the country, that parties oppose each other when in opposition for frivolous reasons but as they come in the driving seat, they have to address the interests of the nation as a whole. And given the Chinese expertise in debt diplomacy, the Wavel Ramkalawan’s government will tread a more responsible path than what many analysts in New Delhi would want to believe.

No country in the Indo-Pacific region can try to wait it out being neutral, and that to a lonely island country in the western Indian Ocean while China slowly tries to make the whole Indian Ocean its own lake. The options are few and to be precise only two, either join the concert of democratic nations and preserve the free and open lanes of sea trade in the Indo-Pacific or even lose your sovereignty too.

The congratulatory message that Prime Minister Narendra Modi has tweeted towards Wavel Ramkalawan is a sign of the same things. The tweet said, “Felicitations to H.E. @wavelramkalawan on his historic win in the Presidential and Assembly elections in Seychelles. We look forward to a strengthening of the close and traditional relationship between India and Seychelles under his leadership, this is a victory for democracy, a common value that binds India and Seychelles.”

In the wake of an overly aggressive China, it is highly likely that the newly appointed government in Seychelles will choose to side with the democratic powers and come into an arrangement with India, one of the four QUAD countries and the pre-eminent power of the Indian Ocean Region. As the examples are piling up of Chinese belligerence and their intentions become clearer, the facilitation from Indian Prime Minister sends a larger message, that, you are a democratic country and the democracy can only be preserved if you stay out of China’s sphere of influence and with the fellow democratic countries.

Even though the analysts and commentariats are unenthusiastic about the political change in Seychelles, the realities are a lot different from 2018, on which they are basing their analysis. And as the government takes shape in the island nation, the possibility of Seychelles coming closer to India is very high, the first step of which would surely be the implementation of Indian Naval projects.