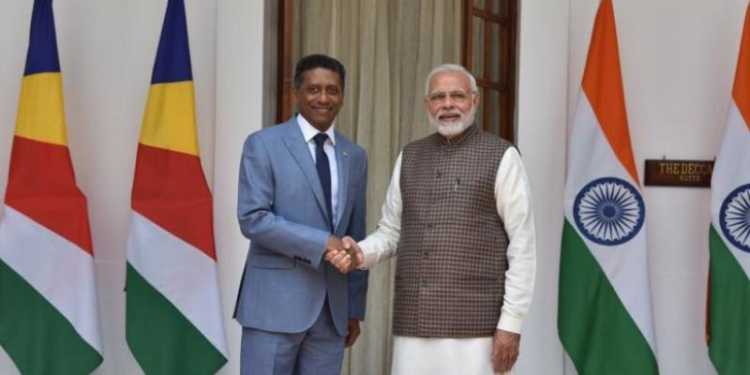 Seychelles President Faure is on a six-day visit to India and has engaged in bilateral talks with Prime Minister Narendra Modi.  The meeting between the two leaders took place at Hyderabad House in New Delhi. In the last two days, India and Seychelles have signed six significant and game-changing agreements including the all important Assumption Island naval base project. The visit and this development has come just days after Faure had announced that a joint project with India to develop a naval base at the Assumption Island could not move forward. This announcement had come after lawmakers had argued that allowing India to access Assumption Island would amount to surrendering territory. However, courtesy Modi government’s astute foreign policy, the two countries reached an agreement on the project.

On developing the naval project, which is touted to give India a strategic advantage in the Indian Ocean region, Prime Minister Modi said, “we have agreed to work together on the Assumption Island project based on each other’s rights”. Faure also expressed similar views in his remarks and stated that the project was discussed and the two sides equally engaged to work together bearing each other’s interests. The agreement had been first signed by the two countries on Modi’s visit to the archipelago nation in 2015. However, the project became a matter of controversy in Seychelles where the opposition vociferously opposed the project. The fact that the project is back on track after Faure’s visit is a major breakthrough in the bilateral relations between the countries.

India has also announced a US Dollar 100-million credit to Seychelles for boosting its defence infrastructure. Prime Minister Modi stated, “With this credit, Seychelles will be able to buy defence equipment to boost its maritime capacity”, during his joint statement with the Seychelles President. Apart from this, India is also going to provide grants for civilian projects in the maritime nation. This will include the building of a government house, police headquarters and the Attorney General’s office.

Faure acknowledged how this line of credit will prove to be of immense help to the archipelago nation and said, “We will benefit from a second line of credit that will help the infrastructure of our military (and) defence forces in Seychelles. Through a grant, we will build a new government house. We will also build a new police headquarters and a new building for the Attorney General’s office”.This is a clear indication of India’s growing influence in the region and grants to countries like Seychelles is going to ensure that India emerges as a heavyweight in the South Asian region challenging the much-hyped Chinese hegemony.

The two countries have added six significant agreements in the fields of culture, cyber security, maritime safety and security cooperation, diplomacy and infrastructure development which are destined to take the relationship between the two countries to the next level. Keeping in view, the strategic nature of ties between the two countries, India has gifted a Dornier aircraft to Seychelles. Prime minister Modi announced that the Dornier would reach Seychelles in time to take part in their national day celebrations to be held on June 29. This will serve as a symbol of close bilateral relations and warmth in ties between the two countries. Faure’s visit is set to go down as a breakthrough moment and seems to be one of the most fruitful phases in the bilateral relationship between India and Seychelles. The way naval base project has been revived after Seychelles seemed to be reluctant to go ahead with the joint project and the new warmth in ties is a testimony to Modi’s persuasive and effective foreign policy.