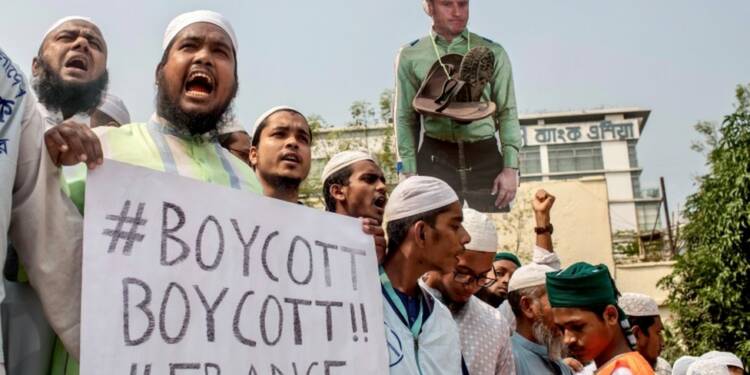 As we speak, a new back and forth is going on between France and the Muslim world. However, there has emerged a pattern which cannot be missed given the situation is bound to escalate further. The reaction towards France is divided and it is looking like the most zealous reactions to French is coming from the recent converts whereas the Arab world has just paid lip service and not come down heavily on France as hard as one would have expected.

The beheading of the french teacher Samuel Paty triggered large scale protests against the radical Islamists in France and the government of Emmanuel Macron did not let this event slide. As the French government started closing in on these Islamist fundamentalists, a strong criticism came from the two usual suspects, the terrorist states of Pakistan and Turkey. It further escalated when Erdogan called Emmanuel Macron mentally unstable and even asked for boycotting French products. Now the anti-French sentiments seem to have escalated further.

Read more: As France gets hounded by radical Islamist nations like Pakistan and Turkey, India must come to support it.

As per Fawaz Gerges, Middle Eastern politics professor at the London School of Economics: “Erdogan has mastered the art of using the sacred as a mobilization tool not just in Turkey but in the wider Islamic world.” It is an interesting observation, given it says that Erdogan uses scare as a tool for mobilization in the wider Islamic world. This is turning out to be true as countries like Pakistan, and people in Bangladesh, Indonesia and other countries with significant Muslim population are protesting against France while basing their hate on Ankara’s disinformation campaign.

If we look at the Arab world, we get a totally different picture. The Saudis and Emirates have remained mostly silent and many other Arab countries have claimed that no one should link Islam with terrorism. Thus, in this case, they are not denying the beheading as an act of terrorism.

How can we explain this pattern? The simple observation would lead us to the fact that the countries which are fresh converts tend to react to anything against any section of Islam in an inhumane manner. This is why we see the acceptance for killing in the name of blasphemy.

(When we address countries as fresh converts to Islam, it is in the historical sense and the timeframe is very different)

If we look deeper into the reasoning and psychoanalytic of it, then we will find that countries like Pakistan tend to display their allegiance to Islam and the Islamic Ummah in extreme ways quite frequently. It is because as they converted to Islam at a later stage, they shunned their history and culture during the process and are now void of any history, identity and a sense of belonging.

It can be better understood with a hypothetical example, that is when a person leaves his/her people and goes someplace else, they try really hard to fit in and sometimes goes overboard while emulating.

The pattern is evident in the South & South-East Asian Region but it is all the more visible in Europe where the number of terrorist attacks and riots are so numerous that we just cannot count. And the Muslims tend to live in ghettos, leading a parallel society to the mainstream.

Thus, when we talk about these recent convert Muslim countries which earlier had a different culture and now have shunned it, they are very susceptible to being influenced by the events in the Arab world (as is the birthplace of Islam).

The current dynamics are a bit different as Turkey is trying to usurp the position of the leader of the Muslim world. Turkey is itself a late convert state and has many characteristics similar to fresh convert Islamic countries. However, given its history as a leader of Islamic Ummah for a long time being the seat of Ottoman Empire it has influence in South & South-East Asian Muslim majority countries like Pakistan, Bangladesh, Indonesia, Malaysia among others.

If a Turkish TV series can make Pakistan emulate the series and emulate the ideas and culture portrayed in it as their identity verbatim, then one can imagine how bad the identity crisis must be in Pakistan. If we look at the current situation in the backdrop of the precarious situation of these countries, then we can get how important the tussle of leadership in the Islamic world is for the whole world.

The current responses and their intensity has shown two camps in the Islamic world. One led by Turkey who has come in total support of the terrorists and Islamist fundamentalists, whereas on the other hand is the Arab countries except for Qatar (obvious reasons) under the leadership of Saudi Arabia who is also the current leader of the Muslim Ummah. While Turkey under Erdogan is going back to the dark ages of the Ottoman Empire as he turns the secular state into an Islamic theocracy. Saudi Arabia is trying to move out of the shackles of past and under MBS is trying to modernise and interpret Islam in a more accommodative manner.

The turkey-led block is criticising even the actions on the fundamentalist terrorists whereas Saudi Arabia is only miffed at the generalisation of the whole Islam being in crisis. While all of them remain silent on the genocide of Uighur Muslims.

Thus, the tug-of-war between Reformist Saudi led block and Regressive Turkey led block is the most important event not only in the Middle East but for the whole Islamic Ummah as well as the whole world. Whoever wins will most probably direct the actions of the fresh Islamic convert nations.

Why do IMF and World Bank keep bailing Pakistan out? Well, China