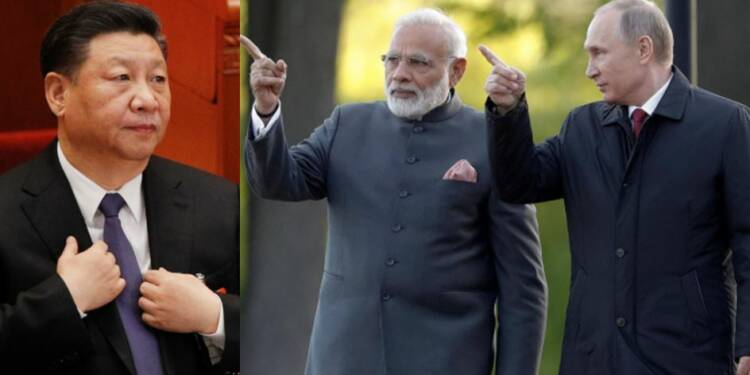 November is going to be an exceptionally excruciating month for Xi Jinping as three high stakes, multilateral virtual summits will take place in a month. Xi Jinping would have to face Prime Minister Narendra Modi & President Vladimir Putin thrice while he would also have to face the Americans during the G-20 summit at the month-end.

Most of the world is angry and bitter because of the COVID-19 pandemic, courtesy China. It has led to a global economic downturn affecting millions of people, a major health crisis and has suddenly halted global developmental projects and has extended the time needed to meet Sustainable Development Goals. Most of the anger is directed towards Communist China and its leader Xi Jinping. So, these global summits will turn out to be really difficult for Beijing to handle.

Russian President Vladimir Putin had recently said that Russia would not form any military alliance with China at the cost of India’s friendship. Moscow has also been frustrated as China has started claiming Russian territories in the Far East like Vladivostok as its own. Not only that, Beijing has been spying on Russian defence technologies and intentionally influencing the WHO so that Russia’s vaccine programme fails. Given all this baggage, Moscow is sure to corner Beijing in these upcoming summits.

Since the last time, Xi Jinping met PM Modi, a lot has happened and the relationship has deteriorated to a great extent. China has been belligerent on all its borders. India and China have been locking horns in the Himalayas for the large part of this year and after multiple rounds of talks, no solution seems to be in sight. Chinese aggressive antics which led to the medieval brawl in Galwan valley on the 15th of June was the tipping point for India. Since then, India has not once shied away from taking anti-China actions overtly, be it the app ban, removing Chinese companies from the Indian Government’s infrastructural projects, limiting Chinese FDI among others. India has since built a concert of democracies and like-minded countries to join hands against Chinese belligerence. It has been successful in consolidating QUAD countries in a corner against China.

Read more: After being humbled by India in war and politics, China tries to placate India economically.

Thus, when President Putin and PM Modi will meet Chinese President Xi Jinping, he will have nowhere to hide. The belligerence that China has shown to India will come back to bite it in these meetings as New Delhi will be backed by Moscow.

Beijing has been bullying the whole world which is dealing with the virus exported from China itself. This has shown that China is a bully and it cannot be trusted as a great power that can lead the world. In such a situation, as China will face the G-20 countries, the picture is not going to be pretty.

As if facing Narendra Modi and Vladimir Putin twice was not enough, in the G20 summit, Xi Jinping will have to face them again, and the Americans and the member countries of the European Union, who have now come out openly against the Chinese Human Rights Violation. The USA has been attacking the Chinese Communist Party for multiple reasons, be it the pandemic or technology theft, the trade war, espionage from within US territories and challenging the US dominance among others.

Xi Jinping will have to face the heat of a reinvigorated QUAD. India, Japan, Australia and the USA will surely lay bare all that China has been doing these past months without mincing words.

All these countries will surely be in no mood to listen to Xi Jinping’s flowery words and ambiguous statements. And in the face of the flood of questions & criticisms, Xi Jinping would have to answer them upfront.

After Macron’s push for a ‘French’ Islam, Denmark is all set to ban foreign funding for mosques