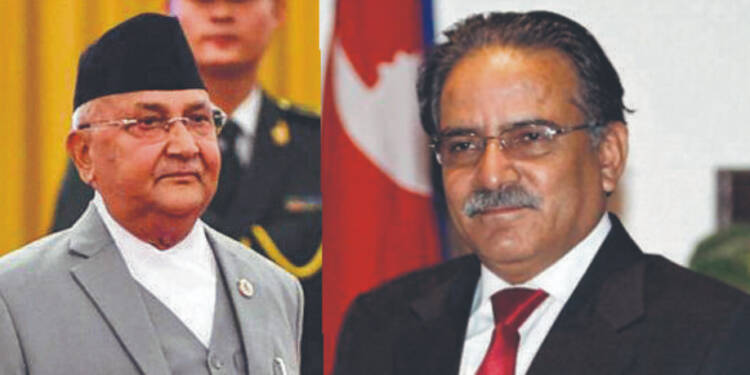 Nepalese politics is yet again in the doldrums. The two factions of K.P Sharma Oli and Pushpa Kamal Dahal Prachanda had joined together to create the united communist front, namely Communist Party of Nepal and formed the government in Nepal. PM Oli has taken an anti-China stance and as per Hindustan, he told NCP Executive Chairman Prachanda that both of them need to part ways. Prachanda represents the Maoist faction of Nepal’s communism and is close to China. Even with the possibility of losing the Prime Ministerialship, the step of parting ways from the haphazardly put united front and easing up to India means that while Oli has turned pro-India, Prachand will act as the new Chinese puppet.

The current visit of India’s Army Chief M.M. Naravane has many meanings to it, and one of them is the scheduled meeting with Nepal’s PM K.P Sharma Oli who is also the Defense Minister. As per reports, this comes after a lot of backchannel diplomacy from the Indian side to make sure Nepal does not slip into the Chinese sphere of influence. Nepal’s current political scenario has divided the ruling party into two factions, one led by PM Oli and the other led by Prachanda. And as Oli turns pro-India as he meets with India’s Army Chief, China has found a new puppet in Prachanda.

Nepal’s PM Oli for a good part of this year played on the behest of the Chinese, be it criticising India at times or reinvigorating the boundary issue which was in the cold basket for a long time. These events brought to light the differences among the Oli and Prachanda faction, and the specific role played by the Chinese ambassador in dousing the fire also confirmed who was pulling strings from the back.

As Nepal maintained its anti-India stance by one decision or the other, China was doing what it knows the best, that is, stabbing friends in the back and seizing territory. Indian intelligence agencies informed Nepal of the land grabs which China was doing in the bordering areas of Nepal. It made things change quite fast, and as the RA&W chief met Oli, many people were suspicious of the intentions of K.P Sharma Oli. The meeting did not go down well even with Beijing and as Prachanda’s faction started cornering the PM on the visit by Samant Kumar Goel, it does not take rocket science to understand that the opposition to Oli’s meeting was sponsored by Beijing.

The division in the party has reached a breakup point. As reported by TNIE, Oli met the party’s executive chairman Prachanda on Saturday and hinted towards splitting the party. It should be looked together with two things. One, the meeting of PM Oli with the Indian Army Chief and the promise of Indian normalisation of relations and two, the realisation of the Prachanda faction slipping in the lap of Beijing.

Many of the party members took to Twitter and gave substance to the speculations. The Finance Minister in Oli cabinet and the General Secretary of Communist Party of Nepal (CPN) Bishnu Poudle said that the party was facing a “serious existential crisis” and “the unified existence of NCP is witnessing a serious crisis”.

The failure of the compromise which was reached in September is not working out as K.P Sharma Oli is not someone to be controlled by others. Oli has turned down Prachanda’s request to convening party’s Central Secretariat meeting to resolve the ongoing dispute. The Chinese after failing to win Oli, have now found Prachanda as their new puppet.

China is aggressively occupying Nepalese territory, and the PM knows that history will remember his legacy, and he can either make it worth admiring or become an example of ridicule. Even now, as all this is going one, China is resolutely seizing Nepalese territory. As per the Daily Telegraph, China has annexed more than 150 hectares of Nepal.

Nepal has been a long-held ally of India, but, with the recent interest of China in the region, the Himalayan nation has tried to balance both India and China to milk the most profit out of the two. This time Mr Oli miscalculated and has been struggling to keep the power. The meeting between the Army Chief and Nepal’s Prime Minister Oli is important in the face of political instability in Kathmandu.

However, Oli and Nepal have long played flip-flops and India will be sure to put conditions before Kathmandu for it does not try any misadventures going ahead. If things go well, Oli will have a solid backing of India he will be able to take on Prachanda.

Read more: Nepal wants India help to reduce dependence on China but India has some conditions

When two communists clash, things do not remain civil, and we can expect a civil war going ahead between the Oli and Prachanda faction. India will not let Nepal slide further into China’s corner, and most probably working together with Oli, India will challenge the Prachanda and China combined.