After Palau islands and Vietnam, Quad is now looking to choke China in Maldives 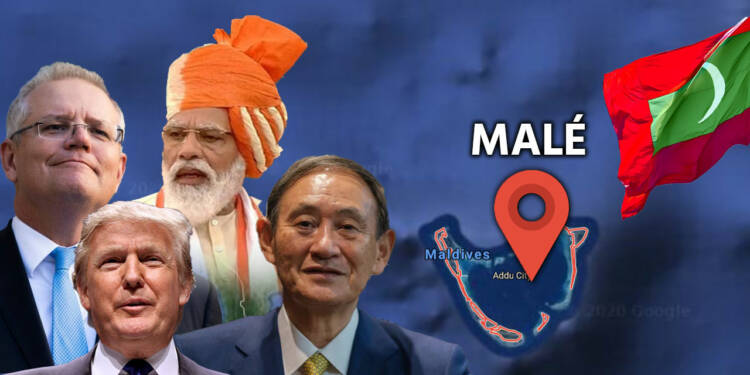 Even if all the problems countries are facing within the Quad member countries, they have been relentlessly focusing on the foreign policy aims in 6

Indo-Pacific and containment of China. After turning Palau in Micronesia and Vietnam in ASEAN, the quad has moved towards the Maldives in Indian Ocean Region, to further their strategic enmeshment of China. Thus, Japan, India’s strategic partner and a fellow Quad member, has signed a pact to strengthen Maldives’ security infrastructure.

The selfish economic stance of China and its aggressive foreign policy posturing, as well as the ever-present diplomatic wolf warrior diplomacy, has made a lot of countries royally angry. The building of artificial islands in the South China Sea and then bullishly not accepting the decision of the International Arbitration Court has made countries really vary of Chinese commitment to the international organisations as well as cooperation with other countries. However, these doubts were factified since the Coronavirus pandemic and the Chinese actions in these pandemic-stricken times.

The reinvigoration of quad as an organisation is catalysed as most of the countries of Indo-Pacific realised that if no action is taken, then it will be too late to act. Thus, the quad countries are acting in consonance to safeguard each other’s backwaters, and all the four countries are working in tandem to address issues in different regions of Indo-Pacific, be it South East Asia, South Asia, Oceania as well as East Asia, they are addressing one issue at a time, acting alone simultaneously together as well.

Japan and Australia had gone out of their way to send their top political authorities to ASEAN countries, and Japan is even signed military sale and supply to Vietnam during Prime Minister Yoshihide Suga’s visit to Vietnam and Indonesia. India is about to sell BRAHMOS missiles to the Philippines, and even in the near future, it can open the way to sell these missiles to Vietnam and other like-minded countries.

Read more: To turn the tables against China, the Quad’s primary focus is on Vietnam and the Philippines.

After India’s nod, USA also went ahead with a deal with the Maldives and now the USA also has an independent Embassy in Male. The signing of the Defense Framework Agreement between the USA and Maldives is a massive step of increasing US activities in the Indian Ocean Region and as a result, increase the activities of the quad in the region.

Read more: It was India that allowed the US-Maldives alliance which is going to end Chinese dominance in the region forever.

The addition of Japan in the IOR strategic picture means that the hold of China in this region is really weak and the possibility of it gaining traction soon is also bleak.

The trilateral (Australia-Japan-USA) support to Palau was really a way of strategically gaining a point against China, and they were able to accomplish a lot as they have decreased the influence of China in Micronesia.

Read more: Palau could be the military headquarters of the QUAD and its location is enough to send a chill down Xi’s spine.

The Maldives and Japan signed the ‘Exchange of Notes’ under the Economic and Social Development Programme of the Japanese government and, granted an aid of 800 million Japanese Yen ($ 7.6 Million) which is to be extended to the Maldives Coast Guard and the Maritime Rescue and Coordination Center.

With the addition of Japan, now it would be interesting to see the Chinese response to it, as these actions have buried a decade of Chinese investment into the region, which was made to gain superiority in Indian Ocean Region. Now, Japanese support to the Maldives will further make the country impregnable to the threat of Chinese debt diplomacy.

In a signal to China, India takes a deep dive into the Indian Ocean